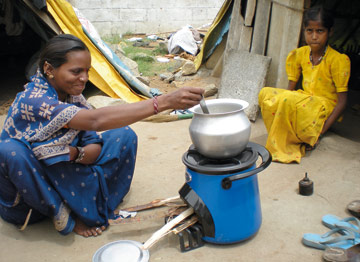 According to the Center for Bioethical Reform, yearly, around the world, approximately 42 million preborn children die at the hands of abortionists whose gruesome work is financed with money lifted from the pockets of the American taxpayer. Secretary of State Hillary Clinton champions the worldwide right to kill unborn children and ardently defends the Obama administration’s murderous global family planning policy.

Hillary’s defense for the right to prevent the world’s children from ever being born makes her clean cooking stove concerns a tad puzzling.  According to global citizen Hillary Clinton, the U.S. will contribute “$50 million toward providing clean cooking stoves in developing countries to reduce deaths from smoke inhalation and fight climate change.”

While there is no more premature a death than aborting a developing fetus, now America’s “right to choose” global ambassador is “sharing the wealth” with third world developing countries to provide clean cooking stoves because the left-wing death diva unexpectedly became overly concerned about the premature demise of 1.9 million people made up mostly of “women and young children?”

All of a sudden Hillary, who approves of scalding unborn children to death, now advocates for spending tax monies to prevent the premature deaths of women and young children due to “smoke inhalation from rudimentary stoves.”

“The World Heath Organization estimates there are over 1.6 million premature deaths each year from cook stove pollution,” which is not only a conservative figure, but more importantly, a small percentage of the total number of fetal deaths that result from the brutal abortion procedures Hillary Clinton strongly supports.

Child advocate and humanitarian Hillary, who would finance the building of third world abortion clinics with American tax money in a heartbeat, expects America to accept the premise that suddenly Madame Secretary is concerned that “smoke from such cooking methods can lead to childhood pneumonia, lung cancer, bronchitis and cardiovascular disease?”

The clean cook stove charitable contribution, for which America will supply $10 million a year for five consecutive years, not only prevents pulmonary problems, but – here’s the bonus – it “also helps limit climate change by curtailing emissions of carbon dioxide and methane – two major greenhouse gases – and black carbon.”

If it seems out of character for Hillary Clinton to suddenly look for ways to protect life, maybe the words of Reid Detchon, vice president for energy and climate at the United Nations Foundation, can offer insight into Hillary’s sudden concern for the well being of the vulnerable.  Detchon said, “This is something that touches on climate, on health, on women’s empowerment, on deforestation and on poverty.” Voilà!

So $50 million later, it’s highly unlikely that Hillary’s support for the Alliance for Clean Cookstoves has anything to do with concern for saving the lives of the children who, despite Hillary, miraculously manage to make it out of the womb, and everything to do with a liberal agenda to further global green policy.