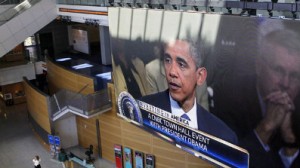 Abraham Lincoln offered sound advice Barack Obama failed to heed, “We must not promise what we ought not, lest we be called on to perform what we cannot.”

Balancing on a stool, Barry O became the center of attention at a televised town hall discussion in what should have been a friendly environment.  Surrounded on all sides by Washington DC residents, who twenty months prior were full of adulation, this time confronted Obama with a seething cauldron of former-fan frustration.

The ad nauseum Obama meeting was  held at the “Newseum, a monument to the First Amendment and a few blocks up Pennsylvania Avenue from the White House.”

At the  live CNBC broadcast billed as “Investing In America,” Obama, who promoted himself as the savior from all things Bush was encircled by, “disillusioned …supporters” who have come to the realization that big government pledges deliver dismal dividends.

The man that made promise after promise was met with, “question after question …by people who said, in short, that they had expected more from him. People … [who] wanted to know if the American dream still lived for them.”  Disenchanted Obama devotees expressing frustration over the state of the nation were met with an out of context smile, platitudes and disingenuous attempts to relate, all of which indicate a disconnected President’s inability to feign understanding.

Those who wept for joy on Inauguration Day were on the verge of weeping with world-weary frustration.  Yet all the questioners were compelling.   Bankers and hedge fund workers, demonized by Obama’s constant harangue, complained the President treated them like piñatas, “whacking us with the stick.”

An African-American, female, military veteran, chief-financial officer told a stunned President Obama, “I’m exhausted of defending you, defending your administration, defending the mantle of change that I voted for.”  The woman continued, “I’ve been told that I voted for a man who was going to change things in a meaningful way for the middle class, and I’m waiting, sir, I’m waiting. I still don’t feel it yet.”

Someone should inform  that sincere lady warm fuzzy “feelings” are what got us into this mess in the first place.

Obama promised what he ought not and now, just as honest Abe warned, the President is being called to account for what he has not. Town hall participants from Wall Street to Main Street who were encouraged to look to bureaucracy as a life saver hammered away over inability to pay student loans, the President’s failure to rescue the middle class and Barack’s culpability for the death of the American dream.

A business man accused Obama of scaring the public, moving to the left of the left and losing the war of “sound bites” and “media cycles”–and this was supposed to be an afternoon among friends.

The town hall participants are not alone, “a recent New York Times poll found that 57 percent of respondents believed that the president did not have a clear plan for fixing the nation’s broken economy.”  For future reference, note to America:  Government fixes fix nothing.

One after the other the “no clear plan,” sentiment was articulated by frustrated town hall participants who demanded accountability from Barack about promises whose delivery have exasperated what the promises should have set right.

As Obama smirked, squirmed and obfuscated the Town Hall meeting embodied a microcosm of America opinion.  The questions, dissatisfaction and indignation proved even the gullible have awakened to the reality that big government ideologue Barack Obama is nothing more than an inexperienced neophyte who was buoyed to the White House on the good will of people who finally realize that the more of Obama’s government fixes left unkept, the better off America will be.