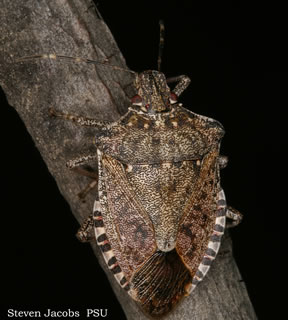 Washington DC, which has been visited by flies, swarming bees and even a rodent or two has recently been visited by an infestation of  “smelly, pesky bugs known as stink bugs.”

For regular people stink bugs are just an annoyance. However, when observing the characteristics of stink bugs one can’t help but notice the similarity to Democrats who, when in power, display traits akin to an irritating insect.

For instance, stink bugs are presently in the process of crushing the harvest of Northeastern fruit growers. “The bug definitely has the ability to puncture fruit and cause some damage and make it un-marketable.” Likewise, political creepy-crawlers are busy crushing, devouring and destroying the fruit born from the laborious sweat of American brows.

One distinguishing characteristic of the brown marmorated insect overrunning DC is its tendency to seek winter refuge. Like stink bugs, Congress closes shop in the fall and reemerges in the spring.

Taking a cue from stink bugs, a Congress infested with Democrats, for the first time since 1960, is considering suspending session three weeks early. Like halyomorpha halys Congress, “wants to find a place to chill out for the winter.”

Entomologists claim stink bugs don’t gravitate indoors for “warmth…[but]… for refuge.” House Minority Whip Eric Cantor (R-VA) verifies stink bug-similarity by contending Democrats fleeing Washington DC seek refuge only because “they haven’t a clue when it comes to creating jobs and getting Americans back to work.”

Similar to the present Washington DC pentatomidae family insect plague, Democrats also feed off a host and tunnel into private premises uninvited. Together with an insect infestation, political pests are simultaneously “flooding houses,” burrowing into finances, health care decisions and even food choices.” Enough with simply swatting away the culprits, its time to take radical steps and “close off the small spaces” where entry is gained and prevent unwanted political policies from infiltrating freedom and lives.

If that doesn’t work experts say, “You can also always call pest control,” which is exactly the plan for Election Day.

However, stink bugs, are unique in how they react to disturbance. In general, both the bugs and the majority party in Washington stink.   However, when anticipating death, both species “emit a pungent odor,” which in turn, makes the smell even worse.  The odiferous stench invading America’s nostrils results from stink bugs anticipating a crushing death knell scheduled for November 2nd.

Michael Raupp, an entomology professor at the University of Maryland recommends vacuuming up stink bugs with a Shop Vac®. Professor Raupp’s instructions: When stink bugs see the vacuum cleaner headed their way be prepared because they’ll let loose and stink a lot.  Disregard the smell, take that vacuum bag and treat it with “extreme prejudice.”  Put the bug-laden sack in the garbage can, “smash it and if necessary burn it.”

American Pest spokesperson, Wayne White maintains, stink bugs, “cause no harm,” they’re “just a nuisance.”  While the insect version of halyomorpha halys is benign, their stinky political counterpart is quite the opposite.  Thus, American voters plan to invest the next two years eradicating Washington DC from the blight of creepy Democrats.

Michael Raupp emphatically stresses, “Get rid of these things because if you simply put them outside they can escape or something like that so… annihilate them.”

The last thing America needs is for political stink bugs to resurface at a later date.  Better to adequately administer a single application of electoral pesticide purging Washington DC from a putrid scourge of Democrat stink bugs.