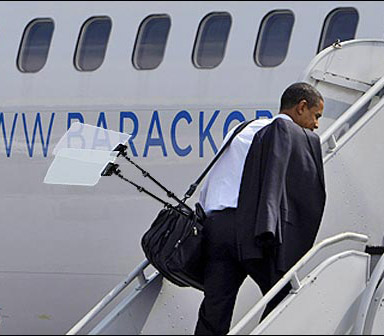 Don’t be surprised if Barack Obama challenges Walter Mondale to a Hamilton/Burr-style duel.  Former Vice President Mondale insulted two of the President’s most cherished possessions: the teleprompter, as well as Barack’s esteemed personhood.

Idiot is defined as: “foolish or stupid person. A person … having a mental age below three years and generally being unable to learn connected speech or guard against common dangers.”  If a teleprompter is a board for idiots, was Mr. Mondale implying Barack Obama is an “idiot?”

The elderly Walter isn’t the only one noticing Barry’s inability to speak without hauling along a scrolling security blanket. The President’s most ardent goose bump-riddled fans are also beginning to disparage Obama’s electronic facade. Chris “thrill going up my leg” Matthews, who just two years ago swooned every time Obama spoke, sounded like a jealous lover discussing the Obama teleprompter addiction:

You know sometimes I really support the President on a lot of his views, in fact all of them but I have to tell you, if he doesn’t get rid of that damn teleprompter. It’s like an eye-test, he’s just reading words now, it’s separating him from us. You go to a meeting with him I’m told at the White House, he hauls out the damn teleprompter and he reads it to them, why even bring people into the room, just have the teleprompter… I sense it’s getting in between him and us.

Unlike Chris Matthews’ unapologetic denigration, Walter Mondale attempted to tone down the “idiot” observation by clarifying for CNN’s Wolf Blitzer: “I think he — he’s very bright — as a matter of fact, brilliant. And I think he tends to — and he uses these idiot boards to read speeches on television and I think he loses the connection that he needs emotionally with American voters.”

How exactly does Walter Mondale assess the intellectual acumen of a person who rarely utters a word without a script?

As far as the empathy issue goes, Barack’s odd habit of looking side to side may have worked in front of 76,000 INVESCO Field sycophants.  However, at a small press conference consisting of 30 some-odd reporters, incessantly pivoting from right to left causes one to resemble a wooden bobble head doll.

During the CNN interview, Mondale intimated that Barack was an idiot with an empathy deficit.  In response, Wolf Blitzer asked the former VP to expound on why he thought Obama lacked emotional connection with the American people.   Beholden to root around for another “he’s very bright” compliment to moderate his short-on-rapport critique, the polite Mondale replied, “I’ve seen places where he’s done it. The Milwaukee speech, I thought was terrific. I think some of these backyard events are terrific.

It wasn’t purposeful, but Walter’s comments implied Barry is self-assured only when stirring up audiences in labor union T-shirts and requesting chili pepper doggy bags, but wavers if addressing sixth grade students.

According to Walter Mondale, Barack is a brilliant idiot, outstanding at extending sympathy, but only when sipping sweet tea in backyard focus groups.  As a result, Obama’s electronic Siamese twin has been saddled with the undue burden of having to come up with a brilliantly empathetic retort to Mondale’s insightful assessment of an unfeeling man, unable to express inner conviction without the direct assistance of an “idiot board.”