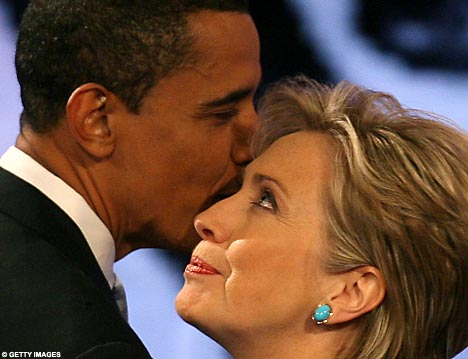 At 62 years of age and ever the diligent public servant, Hillary Clinton circumnavigates the globe like a Granny on steroids. The exhausted Secretary of State looks bedraggled and in desperate need of an extended spa visit. Yet, Mrs. Clinton has no time to waste napping, leisurely dining with Bill or shopping with daughter Chelsea.

Clinton dutifully executes the job of Secretary of State as a prerequisite to returning with a U-Haul full of items stolen from the White House for a second stint where another Clinton-without-pants occupies the Oval Office.

Now the buzz is Barack may be mulling over recruiting Clinton for the 2012 Vice Presidential slot, a ticket some call the “Dream Ticket.”  In Hillary’s fantasy world, a “Dream Ticket” probably does not include “Hillary for VP” bumper stickers.

Nevertheless, Bob Woodward of the Washington Post told CNN “Some of Hillary Clinton’s advisers see it as a real possibility in 2012. The scenario – whereby Vice President Joe Biden and Secretary of State Hillary Clinton would switch positions… [which]… is seen … as a potentially savvy strategy to gin up excitement among what appears to be a depressed Democratic base.”

Perfect! As a representative of “Barack America,” diplomat Joe can enlist Delaware Dunkin Donut employees in India while Hillary settles into the corner house on 34th Street and Massachusetts Avenue in Washington DC.

In lieu of babe magnet Bill Clinton being on the ticket to draw the female vote, President Obama, who “needs [the] women, Latinos [and] retirees that [Hillary] did so well with during the [2008] primaries,” is contemplating having as a running mate a bi-lingual woman of retirement age who frequently visits Spanish-speaking countries.

Hillary has a lot to think about: should she challenge Barack in 2012, or wait until 2016 and still “be younger than Ronald Reagan…[if]…elected president?”

With those credentials, shouldn’t the first former First Lady/Senator/Secretary of State from Arkansas and New York Hillary Clinton automatically assume the role of first female anything with the word “President” in the title?

In much the same way Hillary swore she’d serve a full second term as carpetbagger Senator of New York State, according to Bob Woodward her advisers rebuff suggestions a Hillary Clinton-Joe Biden switcheroo is “on the table.”   Nonetheless, Woodward maintains Hillary’s “clout around the world … is in part, not just because she’s Secretary of State or because she was married to President Clinton,” but because “people see a potential future president in her,” which is the inexorable objective of every breath Mrs. Clinton takes.

With that in mind, is Barack willing to chance having someone with an insatiable appetite for power  second in line to the presidency?

It remains to be seen whether a desperate Barack Obama plans to enthuse the Democrat base by enlisting Madame Secretary of State as a 2012 running mate. Know this: if Obama does and wins, sleeping with one eye open is something he should begin practicing well before commencing a second term with Hillary Clinton as a successor.