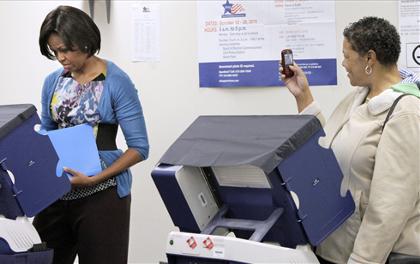 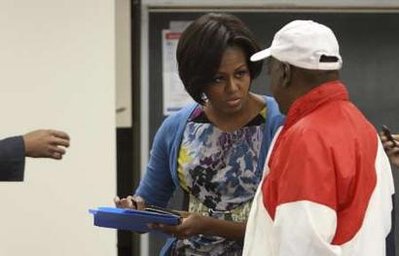 Mrs. Obama, aka Barack’s “secret weapon,” is on the campaign trail.  Thus far, America’s First Lady is doing one helluva bang-up job.  In an effort to gain momentum, the Democrat Party’s “closer” has drawn public attention to alternative religion, as well as revealing the First “Lawyer” Lady has zero grasp on the law.

First, on the Tom Joyner radio show, Michelle reminded listeners “once again we have the power,” then confused the issue by declaring “Barack can’t do this alone.” Mrs. Obama followed up the power/powerless statements by sending out good vibrations to shamans and prayer warriors.

Everybody I know in our communities are praying for us. Every day we feel that. And let me just tell your listeners that it means all the world to us to know that there are prayer circles out there and people who are keeping the spirits clean around us.

Michelle commenced campaigning by promoting a mélange of New Age religion mixed with a smidgen of Native American spiritualism, affirmed by an exuberant Tom Joyner who intermittently interjected Michelle’s preachy broadcast with more than one Pentecostal-style “Yes!”

Then, just as America was processing the “prayer circles” and “clean spirits” comment, Michelle, determined to vote early and accompanied by a cadre of photographers, decided to mosey over to the Martin Luther King Center on Chicago’s south side.

In full view of voters, resplendent in a lovely blue outfit, Michelle voted and did so very publicly. Distracted voters snapped cell phone cameras as the First Lady, in the midst of a political campaign, cast a ballot for Democrats.

Ever the pragmatist, Michelle, after voting in full-blown campaign mode, allegedly decided to encourage voters to vote Democratic in close proximity to where voters actually vote. Mrs. Obama posed for polling place pictures and then, according to Mr. Dennis Campbell, after smiling for the camera turned to remind him “how important it was to vote to keep her husband’s agenda going.”

Leaving the polling place, Michelle offered unsolicited advice to election judges “to make sure that everyone is voting early.”

Either Mrs. Obama considers a First Lady above the law, is a lawyer that doesn’t know the law, or forgot that “electioneering or soliciting of votes or engag[ing] in any political discussion within any polling place [or] within 100 feet of any polling place” is prohibited in the state of Illinois.

A top Illinois State Board of Elections official said Michelle Obama, Esq. “May have simply been ignorant of the law and thus violated it unintentionally.”

The official then said, “You kind of have to drop the standard for the First Lady, right?” An election board official suggested the First Lady was exempt from following the law because, “…she’s pretty well liked?”  Are well-liked people no longer liable for illegal solicitation of votes?

If what the top Illinois State Board of Elections official said is correct, a legally “ignorant” Michelle Obama, loosed by Democrats to rouse pre-election energy, “probably doesn’t know what she’s doing.”

Regardless, Mrs. Obama ardently believes Obama’s agenda has “come much too far to turn back now.” Thus, in order to ensure the midterm election provides Barack “a chance to finish what [he] started,” occasional lawbreaking may be justified to achieve a higher goal.

If, in the end, Michelle’s valiant efforts – criminal or otherwise – fail to turn the tide in favor of Democrats, on Election Day Barack and Michelle can always rely on Black Panther “prayer circles” to keep “clean spirits” from voting.