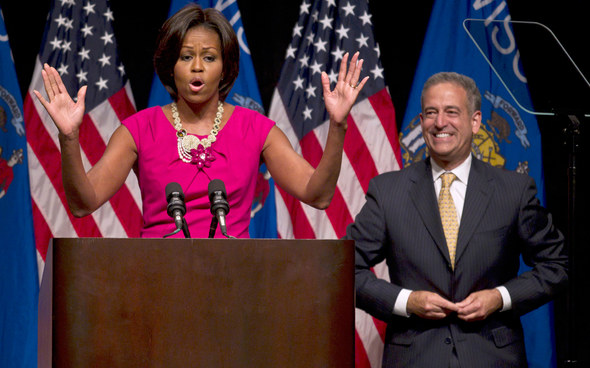 Crisscrossing the nation, Michelle Obama is out stumping for Democrats.  The First Lady dropped in on America’s Dairyland to “badger” Wisconsin voters to reelect Senator Russ Feingold.  Michelle lent star power to the beleaguered Feingold, who has raised twice the cash as his opponent Ron Johnson but still trails him in the polls.

If Russ was counting on Shelley’s stump speech to remind Wisconsin voters he’s worthy of reelection, the Feingold campaign might be disappointed.  Michelle’s 2700-word-plus discourse gave the political achievements of the Wisconsin candidate less than 400 words.

It appears Michelle got confused as to whether it was 2010 or 2012 and began campaigning for Barack’s reelection. A quick scan of the “Mom in Chief’s” monologue mentions “Barack” about 16 times and incorporates “he” or “him” – as in Barack – about 23 times, give or take.  Not to mention the words “my husband” about seven times, and that doesn’t even include the “my,” “me,” “I,” and “I’m,” which without the 50 or so interjections of “we” and “we’re,” added up to a little less than 80 times.

One can only hope candidate Feingold was okay with having the name “Russ” mentioned only 22 times.

After giving a short synopsis of Feingold’s 17-year career, the First Lady felt the Senator would have the best chance for reelection if she recapped the last two years of Barack Obama’s thoughts, feelings, heartaches, dreams, and ideological accomplishments – all of which Feingold supported and may well be the primary reason the incumbent is trailing in the polls.

“Let’s Move”-Michelle spent time in Milwaukee, eating burgers and fries and “Look[ing] into the eyes of children,” both of which the First Lady claims motivate her to keep “hope and change” moving forward. Michelle came to Wisconsin not as a campaigner, but as a Mom concerned “about the issues facing our nation [and] what it means for [her two] girls,” who were back home in Washington DC without Mom.

Disregarding the President’s disapproval rating in the polls, the First Lady proudly publicized Barack-inspired, Democrat-approved policy accomplishments.  Prodding Americans toward the polls, Michelle seemed ignorant of the fact that the midterm election is firming up to be a referendum on Obama’s dismal performance.

Michelle touched upon Obama administration highlights such as skyrocketing unemployment, mortgage foreclosures, Afghanistan war injures, and crumbling schools, as well as the recession without end.  For good measure and to keep things upbeat, Shelley even threw in her father’s multiple sclerosis, gender discrimination, and the fact that the proverbial American dream is slip-sliding away.

Michelle told voters that Barack ran for president because “Folks all over the country were worrying that maybe that fundamental American promise was being broken – and that no one in Washington was listening.”  What Michelle evidently fails to recognize is that since getting elected, Barack listens less, has broken more, and has caused more worry, anger and anxiety than any president in history.

The First Lady told Wisconsin that without the man even she doesn’t always agree with, America’s future would be even dimmer than it is since Obama made things worse, which hardly seems possible.

Listening to Michelle campaign for Russ Feingold, the only element missing was a video presentation of Barack’s iconic rise to power and fame. On behalf of Russ, the First Lady painstakingly reviewed how Barack become a celebrated Chicago community organizer, Illinois State Senator, U.S. Senator, and finally America’s most horrendously inexperienced president to date.

If somewhere in the crowd an incognito Ron Johnson was listening to Michelle’s speech, the senatorial candidate would likely begin drafting an acceptance speech on the back of a “Russ Feingold 2010” campaign banner.

The First Lady attempted to boost Feingold’s image by mentioning Barack’s supposed job-creating tax cuts in a nation where, since elected, unemployment has risen to historic proportions.  Then the “he-we-me-I” litany continued as Michelle recounted everything from traumatic brain injuries to Stanley Anne Dunham’s terminal cancer/insurance industry struggles to Lilly Ledbetter and Elena Kagan.

On behalf of Russ, Michelle also reminded voters that Mr. Feingold supported Barack in passing a health care reform bill that 55% of Americans want repealed and helped pass legislation that allows adult children to mooch off parents until they are 26 years old.

Michelle proudly shared, “Now, these are just some examples of the kind of change that we’re making. And it’s because of all of you…it’s because of leaders like Russ…that so much has been accomplished in such a short period of time.” Michelle acknowledged, “Change hasn’t come fast enough.” Does not “fast enough” apply even though 95% of America suffers from Obama-policy whiplash?

Michelle clarified that “change” wasn’t actually going to happen “the minute Barack walked through the Oval Office door.” Does that mean “five days away from fundamentally transforming the United States of America” was a catchy campaign catchphrase?

Unwittingly, the First Lady inadvertently called attention to the inherent Democrat inability to comprehend the difference between lofty sloganeering and reality.

Take for instance the exhortation: “We also need you to find those folks who are planning to sit this one out, and we need you to tell them that they can’t vote just once and then just hope for change to happen. They’ve got to vote all the time, every time.”

Statements like that may need to be more succinctly clarified for those who take things literally, especially “they can’t vote just once,” and the “vote all the time, every time” part.

After almost two years, Michelle offered encouragement to the downtrodden, reminding voters that “it’s going to take a lot longer to dig ourselves out of this hole than any of us would like.” Such truthful words coming from a lady who must also recognize that, after digging a $787 billion hole without the now-non-existent shovel-ready shovels, getting out of the stimulus hole Barack created will be a daunting task indeed.

Nevertheless, after speaking non-stop about Obama’s campaign and presidency, Russ-Feingold-for-Senator supporter Michelle reminded Wisconsin voters that “in the end, the [Obama] campaign was never just about putting one man in the White House.”  Good thing, because Michelle Obama’s cross-country campaign junket will likely seal a Republican victory in the mid-term elections and simultaneously convince voters that in 2012 any “one man” but Barack Obama should be the next “one” America puts in the White House.