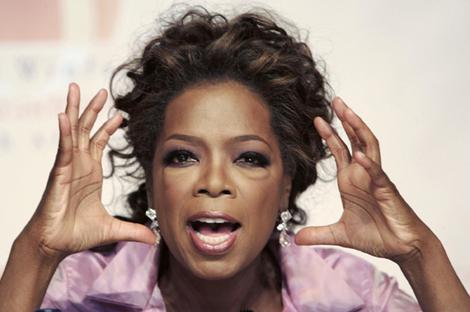 Move over Jon Bon Jovi, Bruce Springsteen and Eddie Murphy, the real “Boss,” Oprah Winfrey, may soon be “living her best life” in a sprawling domicile located within the state borders of New Jersey.

Can Oprah Gail still afford a mansion? If she can it’s a downright miracle because Lord knows, if Barack Obama’s success-squashing policies were in place when the girl from Mississippi was climbing the media ladder to mega-mogul status, the self-made billionaire and CEO of Harpo Inc. would be flat broke like the rest of America.

Born the illegitimate daughter of a sharecropper, Oprah disregarded the barriers that race and poverty often pose and fulfilled the type of dream that first black president Barack Obama claims is nonexistent for minorities in America.  Don’t tell Barry, but when not behind the pulpit, Reverend Oprah, head evangelist of the First Church of Obama, actually practices a gospel of pluck and ingenuity reminiscent of Raggedy Dick of Horatio Alger fame.

Oprah Gail once said, “I don’t think of myself as a poor, deprived ghetto girl who made good. I think of myself as somebody who from an early age knew she was responsible for herself – and I had to make good.” Based on that philosophy, Oprah obviously adheres to a standard quite different from the one practiced by pay-my mortgage/fill-up-my-gas-tank Barack Obama followers.

Defying all odds, the farm girl turned entrepreneur surmounted paucity and teen pregnancy to accrue not millions, but billions of dollars.  Winfrey earned the title of the richest black person in the world and did so by implementing behaviors and attitudes quite different from those promoted by a candidate she encouraged millions of book club members to elect.

Prior to Barack’s historic presidency, Winfrey built a huge empire that consists of more than fame and money. The TV tycoon is the proud owner of high-end property in trendy locales like Hawaii, Antigua and Telluride, Colorado. Looking to accumulate a few additional “favorite things,” Oprah has started her own network and is presently mulling over the purchase of a $68 million dollar mansion in New Jersey.

Two years ago, during a house-shopping hiatus, Oprah Winfrey turned her attentions from real estate to foisting Barry’s “share the wealth” mantra on everyday America. Two years later, the billionaire businesswoman who did better, was better, walked taller, and whose stockpile of money has always been higher is again moved, but this time by the thought of relocating to an ostentatious North American castle in New Jersey.

The media maven denies it, but a three-car contingent, including a few environmentally hostile, gas-guzzling SUVs and a van, supposedly were spotted perusing the New Jersey Turnpike. Oprah’s caravan rolled up the gravel driveway of the Frick estate to inspect the “grounds and grand interior of [a] mega-manse in Alpine.”

Don’t tell Barry about this either, but after the hoi polloi were shooed off the grounds Oprah spent the afternoon touring the “30,300-square-foot, English manor-style mansion, which is part of the lavish ‘Estates at Alpine.'”  The manor has “walnut and marble floors, Venetian plaster walls, a carriage house, English gardens, a library, ballroom, movie theater, tennis court, a saline pool and wine cellar.” How can an Obama supporter like Oprah Winfrey personally justify dwelling in such excess?

Reportedly, Oprah earns $385 million annually. At a 36% tax rate the media magnate pays approximately $138.6 million in taxes a year.  If Obama raises the percentage rate on anyone making over $250,000 to 39%, Oprah stands to shell out an additional $11.6 million per year, a mere pittance for someone gagging on greenbacks. Nevertheless, few would argue that there is a marked disconnect between Oprah’s massive stockpile of assets and her support for Barack Obama, whose view and opinion of affluence, overindulgence, and fair distribution of wealth differs greatly from Winfrey’s opulent lifestyle.

Thus, taking into consideration the enormity of Oprah’s possible new real estate acquisition, a “share the wealth” bureaucrat from the Obama Administration, on behalf of the less fortunate, should be dispatched to New Jersey to gather a detailed account as to the number of underprivileged people that could comfortably bunk and bathe in a facility of that size.

Either way, when it comes to distributing “pieces of the pie,” kingmaker Oprah’s slice is the size of a Cake Boss whopping sheet cake. The tax-the-rich Obama supporter/self-made billionaire Oprah Winfrey is forced yearly to divvy up megawatt earnings to share with the government, which may explain why one of the richest people in the world is suddenly attracted to a state presided over by anti-tax governor Chris Christie, who one day soon may be a viable contender for the White House.