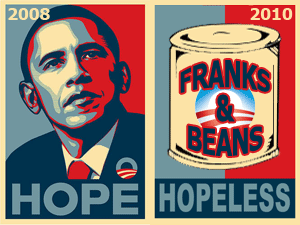 The woman is unforgettable.  Velma Hart was the first African American woman to step forward and tell Barack Obama she was one of the 95% of his black voters teetering on the edge of being sorry she did.

My husband and I joked for years that we thought we were well beyond the hot-dogs-and-beans era of our lives, but quite frankly, it’s starting to knock on our door and ring true that that might be where we’re headed again. And quite frankly, Mr. President, I need you to answer this honestly: Is this my new reality?

Approaching the microphone, a gracious Velma expressed deep honor and relief to have an opportunity tell the harbinger of hope and change about fear and disappointment.

A patriotic veteran, wife, mother, and typical middle-class woman, Velma said she was “exhausted of defending” all things Obama. Caught in the fluffy emotion of Barack Obama’s “mantle of change,” Velma poured her heart out to a President she supported for all the wrong reasons. Velma had no idea that Obama’s ethereal mantra was about to deliver her family an unexpected change.

Velma shared family struggles and concern over the economic situation. Barry laughed uncomfortably and responded by offering platitudes, calling Velma American “bedrock.” After spouting off a few insipid statements, Obama made an inane and, “quite frankly,” demeaning remark about Velma buying new shoes.

Then, the President who probably doesn’t eat franks and beans rattled off a laundry list of “moving in the right direction” accomplishments like health care and credit card reform and then segued into student loanclaptrap by relating personal anxiety about sending Malia and Sasha to college.

Hart was concerned then and she’s probably even more concerned now.  In the words of Mrs. Hart, “quite frankly” Obama has neither done nor said anything to help, then or now, because after speaking out for a frustrated nation, Velma lost her job.

In a move to “cut [the] bottom line,” Jim King, the national executive director of Am Vets, a non-profit, Maryland-based organization that serves the needs of American veterans, dismissed bold Obama confronter Velma Hart from her job as Chief Financial Officer. “King would not say whether the organization had had other layoffs.”

At the time of the polite verbal altercation, Mrs. Hart was disappointed about the level of “change” and now, two months later, Velma will be lucky if she has enough spare change to buy those franks and beans she spoke about.  Obama’s promises didn’t come through fast enough, but being asked to pack up her desk after complaining about it sure did.

Two months later, Velma Hart received the answer she sought when she said, “Quite frankly, Mr. President, I need you to answer this honestly: Is this my new reality?”

If Velma was looking for an answer, she should have gone straight to Jim King of the Am Vets and not the President. Mr. King spoke about Obama supporter Velma being terminated and summed it up perfectly in a statement full of irony: “It’s not anything she did.  She got bit by the same snake that … bit a lot of people.”