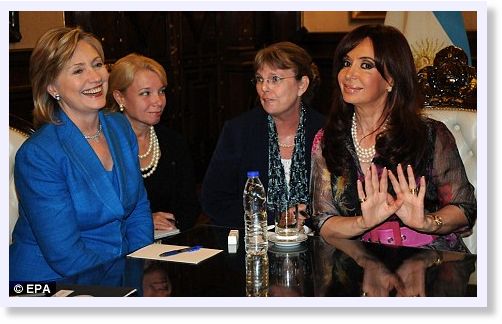 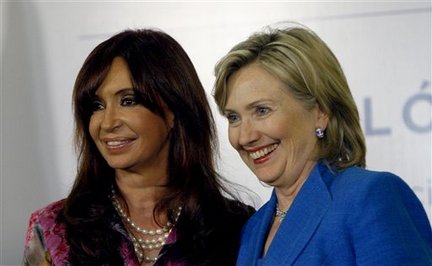 Recently, the highly controversial WikiLeaks document mega-dump exposed confidential diplomatic secrets to an already unstable world. Disquieting revelations that “American and British diplomats fear Pakistan’s nuclear weapons programme could lead to fissile material falling into the hands of terrorists or a devastating nuclear exchange with India” surprise no one. However, the leak that America’s most famous woman scorned dared to probe into the marriage, relationship, and emotional stability of another female leader is downright mind-boggling.

Talk about audacity. Among the documents Wiki made public was a stunning communiqué from the office of Hillary Clinton asking the U.S. Embassy in Buenos Aires to “delve into the psyche” of Cristina Fernandez de Kirchner, current Argentine president and widow of late President Nestor Kirchner. Hillary Clinton, possessor of a mind so twisted that she can justify a marriage to a proven serial womanizer, has the nerve to inquire into the status of another woman’s psyche?

The cable, sent at 2:55 p.m. on New Year’s Eve, and originating in the department’s Bureau of Intelligence and Research, asked a series of other probing questions as part of what it said was an attempt by her office to understand “leadership dynamics” between Kirchner and her husband, former President Nestor Kirchner.

Psyche probes aside, presidential aspirations may explain Hillary’s inordinate and demeaning interest in Argentina’s first elected female president. Much like the Clintons, the Argentinean political power couple met when Cristina was still in law school. In 1975, both the Clintons and the Kirchners wed and went on to practice law.

When Nestor’s term ended, Cristina ventured into politics and was elected to the Argentine National Congress as Deputy and Senator of Argentina. Mrs. Kirchner then made a successful run for the presidency, and in 2007, Nestor officially settled into Bill Clinton’s dream job of First Gentleman.

By way of WikiLeaks, Hillary-the-voyeur was caught trying to decode the “mindset of Kirchner’s husband, who was [Cristina’s] closest adviser prior to his death” (which, by the way, was from natural causes, not a spousal reaction to philandering). The confidential documents embarrassingly expose the former First Lady’s imperious insolence, overlooking as she does the perverted mentality of her own husband while exploring the “mindset” of someone else’s.

Furthermore, one can’t help but ask: How does Hillary Clinton, of all people, have the effrontery to inquire into the “leadership dynamics” of any married political team?

Instead of evaluating the Kirchner marriage, it might do the snooping Secretary of State good to spend some time in Chappaqua contemplating how a woman could suffer the humiliation of a dysfunctional, adulterous relationship and choose to publicly weather disgrace in order to retain power and political prestige.

Every one of Hillary’s personal inquiries is strangely similar to the ones Americans struggle to push aside on the rare occasion that Mrs. Clinton stands awkwardly alongside America’s most famous Lothario in public.

Leaked classified documents indicate that marriage/relationship expert Hillary Clinton “saw Kirchner and her husband as perhaps prone to emotional instability,” which would be laughable if it wasn’t so detrimental to diplomatic relations. It would be interesting to know how Hillary would diagnose a woman who on national TV maintained that a “vast right wing conspiracy” targeted an innocent man — even after investigators swabbed a DNA match off an unmentionably stained blue dress.

In the name of healing diplomatic relations, maybe Cristina could reciprocate by inquiring of Hillary how one endures the pain of 35 years of repeated marital infidelity. Mrs. Kirchner might choose to rephrase Hillary’s questions in the following way: “As he’s matured, has the former president demonstrated a greater tendency to drift between extramarital affairs? What is the most common trigger that stimulates Bill’s abnormally large libido and/or inability to remain faithful?”

Hillary, nose pressed up against the window of the Casa Rosada, has been smudging up the political windows trying to figure out if Cristina de Kirchner views “circumstances in black and white or in nuanced terms[.] Does she have a ‘strategic, big picture outlook’ or does she ‘prefer to take a tactical view?'” Based on the pointed nature of the questions, maybe, for a minute there, Hillary mistakenly addressed her own reflection in the window.

Known to be “thin-skinned and intolerant of perceived criticism,” Hillary Clinton also accused the Kirchner government of what both Hillary and Bill have been repeatedly guilty of — thin skin and intolerance toward criticism. These character flaws may soon rear their ugly heads as Hillary is asked to respond to accusations of sanctioning espionage.

Surprisingly parallel political histories and, for whatever the reason, Cristina’s unhindered ascent to the presidency may be the underlying factors in Hillary Clinton’s quest to figure out the psychological makeup of a woman whose marriage somehow managed to both survive and produce two presidents. Secretary of State Clinton, above all, is well aware that regardless of mental or marital health:

No modern-day couple in a democracy has carried out a comparable transfer of power, and certainly not in Latin America. In the four and a half years of Mr. Kirchner’s presidency, the couple, affectionately known as “the penguins” — a reference to Mr. Kirchner’s Patagonian home state of Santa Cruz — evolved into Latin America’s Dynamic Duo, power brokers who held sway over a country of 40 million people.

Clinton’s probing questions are clearly more pertinent to her own psyche than to Mrs. Kirchner’s. The irony is that the dysfunction Hillary secretly sought to uncover in Argentina actually resides within Clinton herself — in the peculiar psychological makeup of a woman who endures a political marriage of convenience to a man with deep-seated pathological problems of his own.