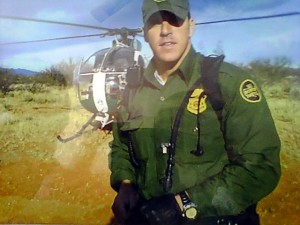 Taking a page from the drug cartels that fearlessly take on Mexican Marines in gun battles, bandits north of the border between Arizona and Mexico felt invincible enough to challenge and kill a US border agent.

Agent Brian A. Terry was “shot dead after he confronted several suspects while on duty with a special tactical team in a mountainous area a few miles northwest of the border city of Nogales.” Apparently, armed banditos figured, “Hey, America doesn’t stop us from crossing over, robbing and raping illegals entering Arizona from Mexico, so what’s a few dead border patrol agents?”

The shooting comes amid growing concern in the United States over the potential for drug cartel violence to spill across the border from Mexico, where more than 33,000 people have been killed since President Vicente Calderon took office in 2006 and vowed to crush the cartels.

Brian Terry , who was gunned down, was a 40 year-old former Marine and ex- metro Detroit police officer.  Although able to survive the mean streets of Detroit as well as surmount the challenges of the US Marine Corps, Brian couldn’t survive a band of illegal marauders causing havoc on the Arizona-Mexican border.

Santa Cruz County Sheriff Tony Estrada said the assailants were likely … either smugglers who use the rugged, mountainous area west of Nogales to haul both drugs and illegal immigrants into the United States, or bandits who frequently prey on them.

Terry was “part of an elite squad similar to a police SWAT team that was sent to the remote areas of north Nogales known for border banditry, drug smuggling and violence.”  Obviously an American patriot, Brian’s sister said: “His dream all his life was to be a federal agent.  It was always ‘I want to be a cop; I want to get the bad guys.'”  Well, the tragedy is that illegal bad guys got Agent Terry instead.

The Sheriff said, “We don’t know if they were protecting a load or preying on people who were coming through … the area … with drugs or humans.” Does it matter? Agent Brian Terry is dead.

Brian Terry’s sister said that being a US Border Patrol agent was “his life. He said it was very dangerous but he loved what he did and wanted to make a difference,” – on a border that DHS Secretary Janet Napolitano insists is “more secure than ever before.”

T.J. Bonner, president of the National Border Patrol Council said, “This is a sign that the politicians and bureaucrats are overly optimistic in their assessment that the borders are more secure now than at any point in our history.”

Instead of condolences, Janet and Barack both owe Agent Terry’s family an apology.

Rather than spend ten days with their beloved son and brother over Christmas, the Terry family will be prematurely burying a United States veteran who needlessly lost his life on American soil.

The harsh truth is that Agent Terry is being laid to rest thanks to a lax Obama administration whose policies have allowed our nation to be invaded from the south and whose ridiculous concern over unfair racial profiling takes precedence over dead Border Patrol agents.

CBP Commissioner Alan Bersin said, “Our commitment to Agent Terry and his family is that we will do everything possible to bring to justice those responsible for this despicable act.”  Someone should inform the well-meaning commissioner that true justice is impossible because those responsible for Agent Terry’s untimely death are in Washington DC, safely ensconced in positions of political power and far from the danger on the border.