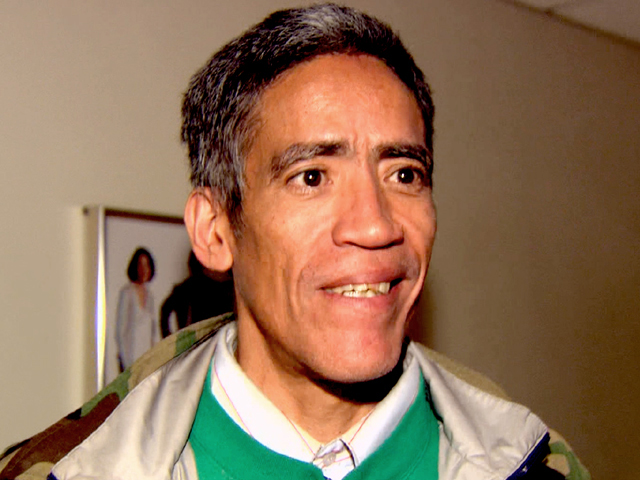 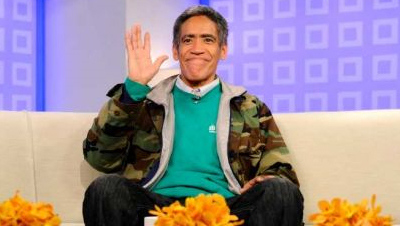 The story is strangely familiar:  A silken-tongued personality acquires celebrity based merely on speaking ability and does so while possessing neither the strong character nor the personal experience necessary to receive the undeserved fame. Now, the Internet is all atwitter over a homeless man originally from Brooklyn, New York with a “golden radio voice” who abandoned his family 23 years ago and was discovered panhandling in Columbus, Ohio.

Ted Williams is known in Columbus as “Radio Man.”  It seems Ted, a 53 year old father of nine, was trained to be a radio announcer. However, rather than report the weather, sit in for Cousin Brucie, or ride around in a traffic helicopter, Mr. Williams “ruined his chances of a journalism career,”  disappearing down the “rabbit hole” by hitting the bottle and much like another smooth talker, Barack Obama, snorting powdery white contraband.   According to Mail Online, “Williams previously worked overnight shifts at WVKO (1580 AM), a former Columbus soul music station,” but instead of polishing the radio mike, polished off bottles of the hard stuff.

It is now three decades after the fact, and Mr. Williams has decided he wants a second chance to broadcast his glossy intonations over the airwaves, get a job and earn money.  Viola! Thanks to the wonders of the Internet, Ted’s wish may come true because the do-nothing, know-nothing radio announcer is now an overnight sensation based on his ability to talk a good talk.

Ted was discovered waving around a corrugated sign made out of an old washing machine box that said:  “I have a God given gift of voice.  I’m an ex-radio announcer who has fallen on hard times. Please! Any help will be gratefully appreciated. Thank you and God bless you.  Happy Holidays.”

Over the years Ted’s priorities were such that he threw his career away to party, and as a result the convicted felon has spent decades “living in a homeless encampment in Columbus,” while a partially blind Ohio woman raised five of his children, four daughters and one son Ted fathered with a druggie girlfriend and then abandoned.

Disregarding Williams’ abuse and irresponsibility, the man with golden glottis and the endearing smile shot to fame after a YouTube video went viral.  The video showcased Ted’s ability to wow listeners in the same way he did over the years whenever he phoned up Patricia Kirtley, the brave, responsible woman who raised Williams’ children while he spent most days curled up on an old mattress consuming alternative substances.

In other words, Ted squandered that God-given vocal gift on drugs and alcohol, and now homeless and penniless he’s been discovered begging for money on the streets, exploiting his ability to mimic Orson Wells and, in turn, has become an instant media sensation.

For Ted, as well as other gifted speakers, things like merely making a “mellifluous radio announcement from the side of the motorway” can turn into a “whirlwind of media attention and job offers.” In fact, “Williams [has] reportedly received job offers from the Cleveland Cavaliers, MTV, the NFL and ESPN. The Cleveland Cavaliers reportedly offered Williams a house.”  Freshly shaven, shod in new clothes and coifed with a neat haircut, Ted is being featured everywhere speaking into radio mikes like a trained seal at the circus. In fact, one TV channel made Williams an offer to “provide narration for its first-ever One Day To End Homelessness telethon.”

The fact that Ted threw it all away and yet job offers come not because of dependability, faithfulness to what is right, perseverance in caring for himself and his nine children, or even maintaining an ongoing relationship with an elderly parent, reveals more about superficial American society than Ted Williams’ desire to rehabilitate himself.

Let’s face it, following in the foot steps of other notable public speakers, Ted Williams is destined for stardom based on an impressive speaking voice and not on more reliable credentials, a situation impacting America more seriously in Washington DC as another smooth talker mesmerizes the nation into tossing all their coins into the ultimate “share the wealth” cup.

Exercising the Barack Obama style of family dynamics, over the years “Williams called once in a while, and Kirtley would hear that baritone voice she fell in love with at first sound. They stayed friendly, and he might come for Thanksgiving dinner, but otherwise, he would remain AWOL.”  However, thanks to YouTube, Mr. Williams will be also be reunited with his disappointed 90 year-old mother who still lives in Bedford-Stuyvesant in Brooklyn.  Ms. Kirtley believes that, after shirking responsibility as a father for thirty years, maybe Ted will finally step up to the mike and be a grandfather to his 16 grandchildren, none of whom he knows.

According to the selfless woman who raised Ted’s offspring, “Williams, who seems to be a nice guy, just wasn’t strong, wasn’t around and wasn’t contributing financially.” Making potato soup and having someone drive her to job training, partially blind Patricia Kirtley, her sisters and her cousin assumed responsibility for the many children Williams and his druggie girlfriends couldn’t raise, and did so to ensure that the innocent results of Williams’ drug-addled meanderings didn’t end up in foster care.

Although Ted’s newfound success should inspire downtrodden people and recovering addicts everywhere, beneath the rags-to-riches Hollywood “Pursuit of Happiness” story is something that speaks of the American tendency to willingly overlook character flaws in the quest for flash-in-the-pan talent.  As we all know, Americans are easily razzle-dazzled by window dressing, artificial smoke machines, electronic reverb and Grecian columns.

Williams, who was never involved, is now a star. The woman and mom who, according to the homeless man’s children, “is more than a phenomenal person,” remains skeptically optimistic about Ted’s future. Williams’ daughter said, “My father is a nice guy, but he fell victim to the streets. We prayed for him and we worried about him, but we became accustomed to the fact that he just wasn’t there.”

So in America, where Ted Williams has been offered a Hollywood movie, glitziness and capriciousness oftentimes are rewarded when the credit should go to a trustworthy person like Kirtley, who deserves the recognition her ex has been getting.

It’s likely only a matter of time until Ted Williams, a guy who speaks well into a microphone, enters the world of politics, giving Barack Obama a run for his oratory money.  Ted can go toe-to-toe with Obama at the mike, with the ultimate prize being catapulted to the heights of political power exclusively on verbal skill, while lacking substance or moral fiber worth mentioning, let alone rewarding.