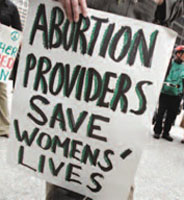 Family practitioner/uncertified OB/GYN Dr. Kermit Gosnell has been charged with the systematic murder of hundreds, maybe even thousands of children.  In addition, it appears Kermit is personally responsible for collateral damage in the form of an occasional dead woman or two.

Dr. Gosnell is charged with the death of 41 year-old Karnamaya Mongar who, while exercising the right to choose, died while submitting her unborn child to safe, legal and not-so-rare feticide in Kermit the Killer’s clinic.  Ms. Mongar “overdosed on painkillers during an abortion in her 18th or 19thweek of pregnancy” in a health center the dead woman’s brother said was both “dirty and bloody.”

Dirty and bloody are standard slaughterhouse fare.  Executioners are notorious for failing to keep pristine sterile environments. So, it’s no wonder Gosnell reused “unsanitary instruments and perform[ed] procedures in filthy rooms.”  In fact, according to patients who made it out alive, “Some of the rooms had litter boxes and animals present at the time of the operations.” Filth may be why Gosnell was named in 46 malpractice suits, one of which involved a 22 year-old woman who died of sepsis and a perforated uterus.

According to District Attorney Seth Williams, women came from as far away as the mid-Atlantic because Gosnell could always be counted on to perform a late-term abortion.  However, unlike Kermit’s minority patients, “White women from the suburbs were ushered into a separate, slightly cleaner area because Gosnell believed they were more likely to file complaints.”

In addition to providing third-trimester reproductive services, Dr. Gosnell is also charged with purposely birthing and then barbarically killing seven viable infants, “born alive during failed illegal late-term abortions.” None of the seven dead human beings were granted the right to life by their mothers, who entrusted Kermit and unlicensed clinic workers with the job of cutting their child’s spinal column with a pair of dirty scissors and disposing, bagging, or placing their pieces in oversized mason jars.

A search of the Family Women’s Medical Society building “revealed that bags and bottles holding aborted fetuses were scattered throughout the building. Jars containing the severed feet of babies lined a shelf.”

Remember serial killer Jeffrey Dahmer? Jeffrey also saved body part mementos. Much like Dahmer, Dr. Gosnell collected trophies, but the doctor’s consisted mostly of low-income, minority babies. The difference between Dahmer and Gosnell is that Kermit’s victims were a lot smaller and the doctor was happy to exterminate regardless of gender.

Now, three decades and a pile of dead bodies later, Gosnell is accused of “Infanticide, Conspiracy, Abortion at 24 or more weeks, Abuse of a Corpse, Theft, Corruption of Minors, Solicitation and other related offenses.”

Running a lawful enterprise in a needy community, Dr. Gosnell likely viewed himself as a committed servant of the commonweal. It would be both confusing and frustrating for someone like Kermit to find himself in prison.  All the man was trying to do was offer a legal service to low-income women without the hindrance of small details like length of gestation or postnatal fetal fortitude.

Logically, a dead baby is a dead baby.  Does it really matter how far along the developmental trajectory a child is destroyed?  Besides, if the President of the United States is not in a “pay grade” to determine when life begins, should an uncertified Pennsylvania OB/GYN be held to a higher standard?  Whether it is 10 weeks, 24 weeks, full-term or born alive, either way the same unwanted baby would be dead, so why penalize a mother for not knowing enough to visit her friendly neighborhood abortion clinic a few weeks earlier?

Let’s face it, the only reason Kermit, his wife, and eight other clinic workers are sitting in a jail cell is largely because of a pesky federal law enacted during pro-lifer George W. Bush’s administration.  The Born Alive Infant Protection Act requires medical facilities that earn their keep by killing the unborn “to provide appropriate medical care and treatment for…children who were born alive after a failed abortion.”

Additional thoughts on the subject published exclusively on  Jeannie-ology and not part of the original article:

In Kermit’s world, what’s the big deal?  Mom comes to Dr. G for help because she doesn’t want a baby. Gosnell slides the litter box out of the room, quickly brushes off the obstetrical table, induces labor, and a squirming baby is delivered.  As the infant gasps for breath, lets out a whimper and shivers from the cold air, Champion of Choice Dr. Kermit severs the spinal cord, tosses the baby into a garbage bag, and when Mom comes to, she’s none the wiser. Thanks to Dr. Gosnell, another satisfied customer sips some warm orange juice from a plastic cup and goes home relieved and liberated from the prospect of unwanted motherhood.

In fact, when it comes to the Born Alive Act (HR 2175), there is one man in particular who might empathize with Kermit and his dilemma. Barack Obama prides himself on placing the right to choose above the right to life. Barack even opposed a bill preventing partial birth abortions which, in essence, except for a few minutes here or there, is no different than what Kermit Gosnell administered daily in his blood-splattered clinic.

President Obama may not literally cut tiny, pencil-thin spinal cords with scissors, but he proudly attests to being more concerned with Roe v. Wade not being “undermined” than wrapping a shivering infant, with skin as thin as tissue paper, in a blanket. Barack Obama believes providing the frail and powerless with oxygen and warmth “burden[s] the original decision of the woman and the physician to induce labor and perform an abortion.”  “Burdening the original decision” with a living child is precisely the type of situation Kermit Gosnell has been working hard to avoid for 30 years.

Dr. Kermit Gosnell is likely going to jail for literally addressing Barack Obama’s concern that nothing should interfere with the decision of a woman and her doctor to induce labor and destroy a living human being. The difference is, with scissors in hand Kermit personally makes short work of a process Obama thinks may take a little longer, but in the end has the same result.