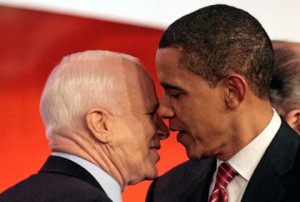 The tactic Republicans used to win the midterm election was to tie every Democrat in Washington, D.C. to Barack Obama.  He and his liberal policies were so unpopular that identifying a Democrat candidate with the president delivered a Republican’s victory.

At the ballot box, the American people sent liberalism to the woodshed.  The nation cast off Obama, as well as Pelosi and much of her progressive Congress.  In January, the Republicans triumphantly arrived in Washington, D.C. promising to repeal health care reform, address out-of-control spending, and elevate conservative principles by making the U.S. Constitution the foundation of legislative discussion.

It’s clear as 2012 approaches that a similar blueprint of calling attention to a failed presidency could help unseat Barack Obama from the Oval Office.  Yet rather than continue to turn up the heat to accomplish that goal, one particular politician appears to be confused about what side of the aisle he should sit on.  That politician is…yes, you guessed it: that poster child of bipartisanship, the always civil and moderate John Sidney McCain.

As witnessed during the last presidential campaign, the Republican nominee had a peculiar way of promoting his bid for the presidency.  On more than one occasion, rather than pointing out the inauspicious prospect of electing Barack Obama, avuncular John reassured a tentative electorate, dismissing very real fears.  Senator McCain encouraged anxious voters not to worry, because his unqualified opponent was “absolutely qualified” to be president.

Instead of promoting his own candidacy, on occasion McCain would attempt to put voters on both the right and the left at ease by saying things like “Barack Obama would make a good president.”  McCain reassured America that his opponent was someone that he “both admired and respected.”

For all the positive free press John gave Barry, the senator might as well have gassed up the Yes We Can mobile and hung up two Barack campaign posters for every one “McCain/Palin 2008” lawn sign.

John McCain’s self-deprecating approach, suppressing a well-deserved distrust for Obama’s left-wing agenda, started two years ago, and now nothing — not even a country devastated by the president’s less-than-impressive stint — can stop John from continuing that trend.  Fawning over Barry in the name of civility compounds the mess McCain started during the presidential election, undermines the success of the midterm election, and paves the way for Obama to leave his suitcases unpacked.

The American public has been closely observing Washington, D.C. since the midterm election for reassurance that by voting for Republicans, they made the right choice.  Instead of keeping the heat on and stressing why the job that was started will be complete only when Barack is sent back to Chicago, old faithful John McCain has stepped forward as an advocate to help rehabilitate Barry’s sullied reputation.

In a Washington Post op-ed, John McCain praised Obama as a “patriot.”  McCain then jumped aboard the Barack bandwagon, lauded the president’s Arizona memorial speech, and said the president’s words “encouraged every American who participates in our political debates — whether we are on the left or right or in the media — to aspire to a more generous appreciation of one another and a more modest one of ourselves.”

Apparently, bipartisan John wasn’t privy to some of the president’s more partisan soundbites.

Appearing on CBS’s “Face the Nation,” Senator Tom Udall (D-NM)’s State of the Union dance partner chose to applaud Obama’s impressive performance as a president.  McCain advanced the crusade to undermine the effort to send Barack back to Chicago by speaking on behalf of “hope and change” and expressing the comforting opinion that “the president has already changed a great deal.”

Rather than lay the groundwork for Obama’s defeat in 2012, the Arizona senator is fast becoming a foundational promoter for the president’s bid for reelection.  John McCain should be helping to further the Republican platform of smaller government, less spending, privatized health care, low taxes, and all things anti-Obama.  Instead, McCain told John Schieffer that “[t]he president, I think, has learned a lot in the last two years, as any president does.  He is a very intelligent man. I think he’s doing a lot of right things.”

If John McCain’s mouth even comes within fifty feet of a microphone, it seems as if the senator uses the occasion to underscore what he perceives to be Obama’s positive presidential accomplishments.  Based on McCain’s relentless attempts to undermine Republican chances to gain back the White House, the historically bipartisan Arizona senator’s misappropriated civility indicates that if there is anyone the very partisan Barack Obama can depend upon to help him win a second term, John McCain is the man.