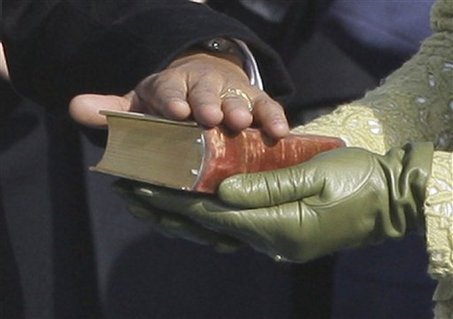 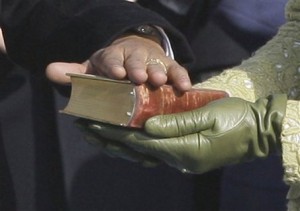 Barack Obama is successfully utilizing newfound sincerity and political repositioning to turn an electoral shellacking into a standing ovation.  The President’s good fortune comes compliments of a nation populated with distracted Americans whose attention spans are so short that popular opinion vacillates from one 30-second sound bite to the next.

According to Slate magazine, Barack is the proud recipient of a recent uptick in the polls because: “Voters are pretty well satisfied with the thrashing they gave [him] two months ago. He had it coming, as far as they’re concerned; he’s got another chance to please or disappoint them.”

In an effort to please and not disappoint, a somber President recently positioned himself behind a plinth in a university basketball stadium and marked the occasion by reading to an audience of 14,000 from Psalms and the Book of Job. In a resounding voice, with conviction and reverence, Barack said this:

Scripture tells us: There is a river whose streams make glad the city of God, the holy place where the Most High dwells. God is within her, she will not fall; God will help her at break of day. (Ps. 46:4-5)

But when I looked for good, evil came; and when I waited for light, darkness came. My inward parts are in turmoil, and are never still; days of affliction come to meet me. I go about in sunless gloom; I stand up in the assembly and cry for help. (Job 30: 26-28)

Thankfully, community organizers are never accused of hypocrisy when painting “cartoon fruit characters” on middle school cafeteria walls for Martin Luther King’s birthday. However, on the 38th anniversary of Roe v. Wade, the President’s recommitment to continue to support abortion could place America’s newfangled Bible enthusiast in a bit of a jam.

To avoid being snagged in a quandary after the capacity crowd left the arena in Tucson and the endless media platitudes ceased, Barack should have invested time thumbing through the Bible before venturing out to make comments that contradict the temperate persona the President struggles to embrace.

If regaining the public’s affection is the goal, Obama’s timing is off.   The President should think before speaking because just days after quoting sacred text and just about the time the Right to Life march was due to descend on Washington DC, America’s moving-to-the-middle President exposed a questionable inner core by publicly vowing to defend legalized murder. America’s Bible thumping/pro-choice president lauded the benefits of a law responsible for the deaths of 60 million unborn children saying:

Today marks the 38th anniversary of Roe v. Wade, the Supreme Court decision that protects women’s health and reproductive freedom, and affirms a fundamental principle: that government should not intrude on private family matters.

I am committed to protecting this constitutional right. I also remain committed to policies, initiatives, and programs that help prevent unintended pregnancies, support pregnant women and mothers, encourage healthy relationships, and promote adoption.

And on this anniversary, I hope that we will recommit ourselves more broadly to ensuring that our daughters have the same rights, the same freedoms, and the same opportunities as our sons to fulfill their dreams.

Barack Obama’s pro-abortion declaration juxtaposed against the words quoted at the Arizona memorial embodies what Job meant when he lamented: “I looked for good and evil came, and waited for light” only to find darkness.

Expressing support for feticide and even giving a thumbs-up to occasional infanticide, the President speaks of women’s health but fails to clarify that the promised protection applies solely to women living outside the womb.

Obama’s disingenuousness was on display when he attempted to justify a woman’s right to choose by citing privacy.  Isn’t the President also committed to enacting intrusive legislation that will pay for abortions with tax dollars, control and regulate everything from earnings to food choices, dictate what vehicle Americans are allowed drive, and push policies that inject themselves into intimate family decisions by way of government oversight of healthcare?

Following up reading Scripture with a supportive statement on behalf of Roe v. Wade indicates Barack Obama should return to the Book of Job.  In Chapter 31, verse 15, Job refers to God and asks the question: “Did not he who made me in the womb make them? Did not the same one form us both within our mothers?”

To avoid further inconsistency, Barack should also take time to plumb the depths of the Old Testament.  Before the President proceeds with his reinvention tour, he should revisit Psalms, where in Chapter 139, verses 13 and 14 the Psalmist also speaks to God, declaring:  “You created my inmost being; you knit me together in my mother’s womb. I praise you because I am fearfully and wonderfully made.”

Intelligent individuals usually don’t need to be told that holding a Bible in one hand while handing a scalpel to an abortionist with the other negatively affects a person’s credibility.

If presented in context, the Scripture Obama read at the Tucson memorial stated clearly that the God of the Bible is the One whose hand places all living beings within the womb. That profound truth imposes a thorny predicament for a President who reads Scripture referencing the God that gives life, and then supports policy that bestows mortal man the right to take life away.

With that in mind, maybe Barack should heed another pertinent verse in the Bible, which says “Do not be deceived: God cannot be mocked. A man reaps what he sows.” If the President of the United States continues to sloppily issue conflicting proclamations in a clever attempt to reinvent his image on the back of the God of Scripture, the result will not be improved poll numbers, but public shame and devastating defeat.