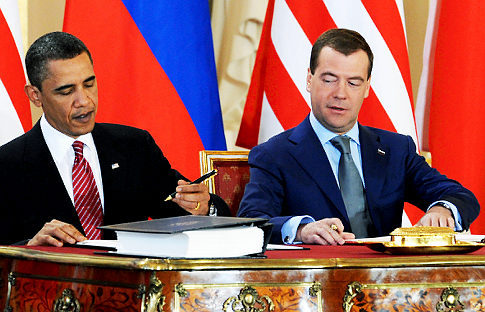 When pro-Obama pundits tout that the President has accomplished a lot in two years, they are correct. Who else in American history has worked so boldly and tirelessly to weaken our nation and undermine national security by hurting our greatest allies and cultivating friendships that are, at best, dubious?

Policy-wise, Barack has done many appalling things. However, the pièce de résistance was finding out that “British nuclear secrets” were used as a “bargaining chip” to woo Russia into an arms control treaty.  In other words, Obama gave away Britain’s nuclear secrets to get Russia to agree to sign a treaty that at the end of the day weakens America.

President Obama began the anti-ally initiative by deciding to suspend plans for a missile defense shield in Europe. The first to be devastated by Obama handing Russia a “diplomatic victory” was Poland, who called the decision to shelve the missile defense plan that Russia opposed “catastrophic.”

G.W. Bush initiated the eastern European missile shield plan in response to what the United States perceived to be a threat from a nuclear Iran. Therefore, Poland was the first ally to be betrayed. By way of Barack Obama, the United States told Poland: “We care more about pleasing our allies’ enemies than we do about our ensuring the safety of our allies.” By placing friends in harm’s way, Obama “gave meaning to those words.”

Besides betraying Poland, taking the bust of Winston Churchill out of the Oval Office and sending it back to Britain and “dumping” Bibi Netanyahu to rush off to dinner should have been a red flag for Britain and Israel, because according to Wikileaks, in 2009:

A series of classified messages sent to Washington by US negotiators show how information on Britain’s nuclear capability was crucial to securing Russia’s support for the “New START” deal.

Although the treaty was not supposed to have any impact on Britain, the leaked cables show that Russia used the talks to demand more information about the UK’s Trident missiles, which are manufactured and maintained in the US.

Washington lobbied London in 2009 for permission to supply Moscow with detailed data about the performance of UK missiles. The UK refused, but the US agreed to hand over the serial numbers of Trident missiles it transfers to Britain.

What Barry did to make friends with a bully was give away the secret combination to his best friend’s new bicycle lock.  And for what? To suck up to a thug who, first chance he gets, plans to show appreciation by beating the tar out of the traitor and adding his bike to the collection too.

Obama hasn’t figured out yet that an alliance built on untrustworthiness stands on shaky ground. If Russia signs a treaty with someone who betrayed an ally, how much faith could Russia have in Obama’s capacity to keep his word?

The President’s inability to listen to the voice of the American people on issues like stimulus, health care reform, and the deficit proves that his haughty self-importance is such that, regardless of the ramifications for those affected, Barry the Inflictor cares little about the results nor the resistance and has taken that attitude global.

The British had a policy of “refusing to confirm the exact size of its nuclear arsenal.” Britain’s desire to “maintain some secrecy to compensate for the relatively small size of its arsenal” meant nothing to Obama who, in an effort to elevate his status with the wrong crowd, managed to make the world a more treacherous place.

Apparently, Obama knows better, even when it comes to disrespecting the national security wishes of a supposed ally and revealing what Great Britain desired to keep top secret. It’s no wonder Obama and Michelle aren’t on the royal wedding guest list.

Today’s poor decision could be tomorrow’s disaster. Obama obviously hasn’t thought through the potential consequence of Britain, in return for the US betraying top-secret information, packing up and leaving Iraq and Afghanistan.

Either way, Obama has proven here and abroad, domestically and internationally, that he doesn’t respect anyone’s wishes but his own.  In this particular case, if a spy revealed British secrets to the Russians they’d be accused of espionage.

Poland and Britain are “allies” who have officially been spurned as the President kindles a romance with a Russian bear. Based on Obama’s stance it appears as if the next ally to be kicked out of the clubhouse is Israel, Obama sided against Mubarak in support of the Israel-hating Muslim Brotherhood having a say in Egypt’s new government.

Although in many circles the Egyptian president is considered a dictator, Bibi Netanyahu is convinced with Mubarak gone Egypt is even more vulnerable to anti-Zionist Islamist rule, a result more devastating for Israel than removing missile shields from Poland and selling Britain’s nuclear secrets to Russia.

What Obama did at the expense of British and American national security was so absurd that America may find out someday Barack left Israel at the mercy of her enemies and assisted the Iranian regime in the quest to obtain a nuclear bomb.

In a few short years, Barack Obama has proven to be the worst example yet of loyalty, faithfulness and allegiance to both America and her closest allies. Who would have thought the President of the United States would be the source of instruction on how not to treat your friends.