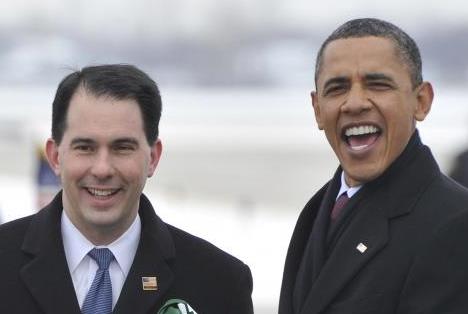 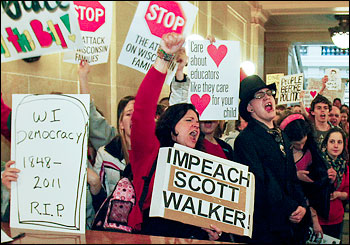 At the 9/12 Taxpayer March on Washington, regular Americans were treated with derision by the President of the United States as they gathered to voice an opinion on high taxes, out of control government and the loss of traditional values.

In response to Barry’s “challenge,” the newly elected Wisconsin governor, Republican Scott Walker, “identified and specified.”  In the face of a $3.6 billion budget deficit and in an effort to rein in out-of-control spending, Walker made the difficult choice to cut state worker benefits 8%, as well as curtail the power of unions in the collective bargaining process.

After Governor Walker responded to Obama’s provocative confrontation, rather than praise the effort to address the deficit the President stood with unions and state workers storming the Wisconsin state capital in opposition to the Walker’s proposal. The President sided with the wrong crowd by befriending unruly protestors whose signage conveyed the antithesis of the President’s moving civility-first message in Tucson.

Quite contrary to his criticism of the Tea Party, the President endorsed the DNC’s “Organizing for America – the remnant of the 2008 Obama campaign -playing an active role in organizing protests” that are raining bedlam down on the Badger State.

After mocking the Tea Party for “waving tea bags around,” the President has said nothing about Organizing for America “Filling buses and building turnout for the rallies…in Madison organizing 15 rapid response phone banks urging supporters to call their state legislators, and working on planning and producing rallies.”

This arm of Obama’s operation – campaigning against conservative change – is predictable. Organizing for America‘s support for the protesters is right in line with the President’s “clear stance against Walker.” History tells us that when it comes to dealing with Republican governors, Obama’s policy is poles apart from his positive response to progressive disorder.

In Arizona, Barack defended illegal aliens, sued the state, and abandoned Governor Jan Brewer in her fight against a relentless invasion from the south. The President remains nonchalant about the war on the border as US federal and border patrol agents and US citizens are murdered daily by drug cartels.

Moreover, if challenged on any level, Barack refuses to budge. After he “won,” Governor Walker came up with a plan to address Wisconsin’s huge budget shortfall and despite opposition has not faltered. Obama should be praising the governor for “ignoring Wisconsin voices today and asking for the power to drown them out permanently tomorrow.” Doesn’t Walker’s stance typify the Barack Obama pay-no-heed-to-those-who-oppose-you style of governing?

In response to the Wisconsin unrest, even House Speaker John Boehner implored the President to get Organizing for America to retreat from inappropriately organizing the disruptive political protest. Boehner said: “I urge the president to order the DNC to suspend these tactics.”

Regardless of the outcome, it is unlikely President Obama will respond to Boehner’s plea in a mature, bipartisan way. In fact, if Scott Walker’s bill passes, Barack will likely retaliate by suing the state of Wisconsin and then turning his negative attention to yet another Republican governor and go after the reputation of, oh…let’s see…maybe someone like New Jersey’s Chris Christie?