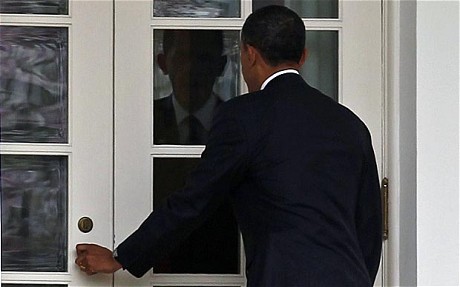 Other than spending quality time in Rio de Janeiro, Barack Obama has had a rough couple of weeks. First, there was the promise of no boots on the ground in Libya immediately followed the potential for boots on the ground in Libya. Then the exotically titled “Operation Odyssey Dawn” got the lowest public approval rating of any military operation in recent history. Obama’s “kinetic” endeavor seems to be surrounded by confusion and inconsistency, as well as humiliating “return the Peace Prize” buzz.  By all definitions, Obama is in the process being slammed by a force generated by his own outstanding competency at being outstandingly incompetent.

Vowing to never give up the Nobel Peace Prize, the President, after being upstaged by French President Nicolas Sarkozy, returned early from a “five-day” trip to Latin America and nonchalantly “strolled up” to the French doors of the Oval Office only to find them locked. Anxious for solace behind the Resolute Desk and far from the dissonance of world events, Obama shook the handle to no avail.

Hearing about the President’s dilemma brought back a distinct childhood memory.   Locked out of the house, my 4′ 11” Sicilian grandmother located and dragged two milk crates alongside the Brooklyn domicile, balanced one on top of the other, shimmied through a very highly situated kitchen window and slid head first into the sink before jumping from the counter to the floor.

After realizing the door to the Oval Office was locked, Obama also managed to gain entry.  The President “appeared to be whistling” as he made his way down from the secured entrance “to another set of doors that” that swung open and warmly welcomed the returning Commander-in-Chief.

Grandma Josephine was resourceful, fiercely independent and fully assured that despite being locked out of the house the situation in no way indicated she was no longer welcome on the premises.  On the other hand, based on the sequence of events, public opinion, and circumstances surrounding anything even remotely involving Barack Obama of late, he probably wondered at least for a second or two whether the universe was conveying a message that paralleled his recent words to Eliot Engel.

Congressman Eliot Engel (D-NY) said, “Everything that the President has indicated to me [about Libya] is that we expect to be ‘in and out‘ very quickly.”

The vision of President Obama encountering a locked door and having to search for another way to access the “seat of power” drips with ironic imagery.  Could it be that, without milk crates, ingenuity and self-determination, the same type of speedy timeframe threatens to befall Strolling Doorknob Jiggler Barack Obama’s Washington DC tenure?

The Oval Office lock out could be dress rehearsal for what lies ahead for Barack in the coming year. For President “in and out very quickly” Obama, the impenetrable, dead-bolted entryway may be a prophetic message to a man whose abysmal domestic and foreign policy skills tend to indicate that after the 2012 election, Barry’s house keys will no longer fit the door.