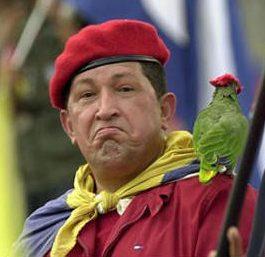 All of America is well aware that Michelle is a proponent of “Let’s Move”-healthy living and endorses vegetables in place of Crème Brûlée and biking in place of Americans riding around in armored Cadillac stagecoaches, but no one expected the socialist leader of Venezuela to echo the message of America’s First Lady.

Hugo Chavez frequently “rails against capitalism. Since taking office … he’s preached against supposed capitalist-fueled vices ranging from alcohol to cholesterol, vowed to curb whisky imports and ordered beer trucks off the street,” which is the one area where Hugo and Michelle part ways. Mrs. Obama’s husband brews honey ale in the White House.

Leaving aside the activities taking place in the White House Brewery, the Chavez/Obama admiration appears to be mutual. Based on political philosophy and past statements, Michelle Obama seems to agree with what Hugo Chavez calls “the evils of capitalism.” For Hugo it’s breast implants and for Michelle, breast-feeding; Hugo decries alcoholism while Michelle urges America to go cold turkey on soda pop; Hugo advises against violent television programs and Michelle keeps Sasha and Malia off Facebook.

Other than the tipple, the duo is aligned across the board, plain and simple. When talking calories, weight gain and healthy eating, Hugo Chavez might as well be Michelle Obama with more testosterone and a Spanish accent.

Chavez parrots Mrs. Obama.  The dictator urged Venezuelans to cut calories to avoid obesity, a practice based on well-documented vacation eating habits that Michelle doesn’t stringently adhere to, and judging by his portly appearance, neither does Hugo.  Nevertheless, Chavez, in conjunction with Michelle, is again warning the country he leads to “Be careful with weight gain!”

Not mentioning the ever-increasing price and limited choices of food in Venezuela, Chavez said: “We are eating better, that’s been proven. We’re leaving malnutrition behind. It no longer exists in the country, but be careful with obesity.” If the unwashed masses refuse to place a limit on consuming arepas, the next step in bureaucratic control could involve designated portion control, mandatory exercise, weigh-ins, and access to health care being based on BMI.

Even though further north, our food prices are also rising Venezuelan-style, and healthcare reform is becoming the justification for regulating fat, sugar, salt, school lunches, and movie theatre popcorn.

Chavez – who often “dispenses advice to supporters during his marathon speeches – said he’d start a campaign to urge Venezuelans to consume less fatty foods and eat in a healthier fashion.” Maybe he’ll mimic Michelle and name the curbing-calories campaign “Vamos a pasar.”

Nonetheless, socialist concern over adipose tissue is not exclusive to planet Earth. Chavez’s recent “commentaries took an interstellar turn last week, when he raised the question of whether capitalism had destroyed life on the planet of Mars.”  Could it be that money and rich food may have been what caused the extinction of Red Planet residents? If so, unbeknownst to Hugo and Michelle, their efforts may ultimately be the means of saving the entire human race.

Hugo said, “Listen up. I’ve always said that it would not be strange that there was civilization on Mars, but maybe capitalism came along, imperialism came along, and destroyed the planet.” If Martians had only done what Michelle Obama recommends, which is to give up dessert, plant a kitchen garden and eat arugula, there’s an excellent chance they wouldn’t have died off and Michelle, and maybe even Hugo, would have another place to vacation.