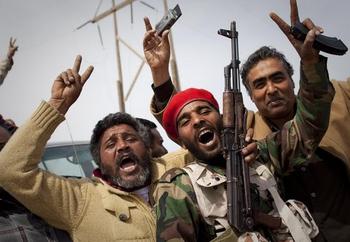 The old saying goes, “If it ain’t broke don’t fix it.” Well, if that well-known idiom is true, shouldn’t the opposite also apply? If something doesn’t work, rather than reproducing the original, shouldn’t someone make adjustments, especially if failing to do so threatens America lives?

Take for example “Operation Fast and Furious,” where, in an effort to track and capture criminals south of the border, the United States Department of Justice allegedly allowed Mexican drug cartels, gunrunners, and gangs to obtain illegal weaponry. Consequently, ICE Special Agent Jamie Jorge Zapata and U.S. Border Patrol agent Brian A. Terry, armed with only a government-sanctioned bean bag gun, were killed by Mexican gang members. These thugs used artillery smuggled over the border under the watchful eye of the ATF, who, somewhere along the line, lost track of the contraband.

Recently, when Mexican President Felipe Calderón came to visit with President Obama, it was reported that “the two […] came together on a policy to stop drug and weapon smuggling across the border.” Asked why he failed to inform his friend Felipe about a US operation that purposely allowed guns to make their way from Arizona into Mexico, Obama said that he “didn’t know about it.”

Under fire for an operation that allowed smuggling of U.S. weapons across the nation’s border with Mexico, President Obama said in an interview that neither he nor Attorney General Eric Holder authorized the controversial “Operation Fast and Furious.”

Responding to the question about U.S.-authorized gun smuggling, Obama maintained plausible deniability on behalf of both himself and the Attorney General. However, Federal Senior Agent John Dodson, whose job was to stop drug trafficking, claimed he was told to allow the weapons to “walk” across the border. Dodson contends, “The gun walking strategy was approved all the way up to the Justice Department. The idea was to see where the guns ended up, build a big case and take down a cartel. And it was all kept secret from Mexico.”

If proven valid, the logic behind such a harebrained idea would be similar to providing U.S. surface-to-air missiles to Iraqi militants so that when American helicopters were shot out of the sky, the radical associations could be traced back to Iran and Hezb’allah.

Dodson predicts that a rogue arsenal will be “claiming victims on both sides of the border for years to come,” which most would agree is a high price to pay for refusing to close the border or take the necessary steps to ensure the safety of America’s citizens.

According to CBS news correspondent Sharyl Attkisson, “Project Gunrunner,” presently known as “Operation Fast and Furious,” was established to prevent “American weapons from getting into the hands of Mexican gangs.” Unfortunately, the endeavor has had the opposite effect. Attkinsson’s account alleges:

ATF managers allegedly made a controversial decision: allow most of the weapons on the streets. The idea, they said, was to gather intelligence and see where the guns ended up […] One agent called the strategy “insane.” Another said: “We were fully aware the guns would probably be moved across the border to drug cartels where they could be used to kill.”

50-caliber weapons are fearsome. For months, ATF agents followed 50-caliber Barrett rifles and other guns believed headed for the Mexican border, but were ordered to let them go. One distraught agent was often overheard on ATF radios begging and pleading to be allowed to intercept transports. The answer: ‘Negative. Stand down.’

Months after Zapata’s and Terry’s deaths, it is being revealed that the government sting operation was so incredibly incompetent that at one point, two men at a border crossing were arrested when found with “AK-47 assault rifles, Ruger .45-caliber handguns and ‘cop-killer’ pistols made to fire armor-piercing bullets.”

Then, when U.S. Customs and Border Protection agents ran the “guns’ serial numbers through a nationwide database,” none were flagged as stolen or suspect. Can anyone say “HHS National Electronic Health Records Database“? Thus, two men and six illegal weapons were released, one of which turned up at a “murder scene in Puerto Palomas, Mexico” a month later.

Yet despite the mess, some at the top must still believe the border “war” strategy of arming potential enemy combatants was a smashing success. Why else would the United States now be contemplating arming anti-Gaddafi rebels in Libya? The current goal is to find a legal way to “allow limited supplies of arms to the rebels.” This time, the justification for the gun-gift policy is not to identify criminals, but to help the vulnerable “defend themselves from attack.”

One minor detail: it is believed that al-Qaeda is fighting alongside the rebels and is already suspected of snatching missiles from an arsenal in Libya. Is this “common sense be damned” or the government’s attempt to follow the vapor trail of successfully launched missiles back to Osama bin Laden?

This is why bureaucratic debacles are pervasive. Government simply refuses to fix blunders, habitually perpetrates proven catastrophes, and not only preserves the dysfunctional, but also takes pride in itself for making it worse. Americans died after someone in Obama’s chain of command thought it was a great idea to arm Mexican criminals. The response to failed policy in Mexico is not to eighty-six the idea completely, but to replicate the plan in a civil war where no one is 100% sure who is friend and who is foe.

If, after the fact, American soldiers die because of arming Hezb’allah, al-Qaeda warriors, and “freelance Jihadists” disguised as Libyan rebels, what is Obama going to do — call upon the trusty “Who authorized illegal guns to Mexico?” excuse, which was that he “didn’t know about it”?

Dead Americans and piles of bodies in a Mexican war prove once again that Obama’s policies are not the answer to anyone’s ills, let alone a means to end a war. Moreover, incompetence is revealing itself as a major source of murder and mayhem both here and abroad. What reasoned, rational person would even propose that a policy that failed so miserably in Mexico be duplicated in Libya — especially on behalf of individuals who, once armed, will make bloodthirsty neighborhood drug cartels seem more like Mr. Fred McFeely Rogers?

When he admitted that he knew nothing about American guns being supplied to Mexican criminals, Barack Obama placed blame on a “big government […] with a lot of moving parts” for border patrol agents being killed with weapons the ATF knew were smuggled across the border. Regrettably, what makes things more treacherous is having a president at the controls who, rather than abandoning a failed policy, chooses to compound an already bad set of circumstances by propagating in Libya the same deadly policy proven to be a fiasco in Mexico.