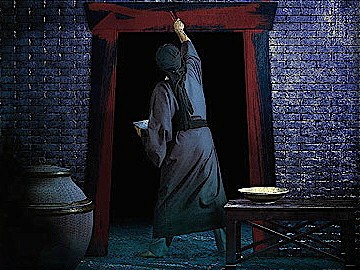 The history of the Jewish people is a long and arduous one.  At Passover, Jews who spent nearly 500 years enslaved in Egypt remember the miracle of God’s deliverance as He sent Moses with a message of hope that God’s chosen people would be released from the anguish caused by the repressive yoke of a cruel taskmaster.

The event is chronicled to have taken place in the year 1446 BC, and 3,500 years later, the Jewish people are on the cusp of being surrounded by a noose of hostile Muslim nations, including Egypt, the nation from which they were originally delivered. And what does Barack Obama compare the Passover message to?  The struggle of extremist Muslims, a people whose core seethes with hatred toward the Jews and who, if given the chance, would forgo enslaving Israel and instead exterminate them.

When Obama hosted the last Ramadan dinner at the White House, the focus of his statement to his Muslim guests were exclusively directed toward Islam’s value and contribution to America’s history and future.  The President ended his Iftar remarks in the following way:

For in the end, we remain “one nation, under God, indivisible.”  And we can only achieve “liberty and justice for all” if we live by that one rule at the heart of every great religion, including Islam —- that we do unto others as we would have them do unto us.

For Passover this year, the President chose not to focus on Israel, a nation threatened daily by murderous hatred.  Nor did Obama reiterate, for those whose democratic chant contains the words “Death to Israel,” to “do unto others as we would have them do unto us.”

Obama didn’t chide the Muslim extremist world for putting Israel in a position to require fresh blood over the lintels of their doors to guard against imminent destruction, but instead decided that Passover was the perfect time to express how God’s deliverance of the Jews is “reflected in Muslim uprisings.”

The story of Passover…instructs each generation to remember its past, while appreciating the beauty of freedom and the responsibility it entails. This year that ancient instruction is reflected in the daily headlines as we see modern stories of social transformation and liberation unfolding in the Middle East and North Africa.

This year, Obama failed to make the connection between Passover and the Jewish nation’s ongoing struggle for survival. Presented with an opportunity to deliver a Mosaic message of warning to the Arab world to release God’s chosen people from the bondage of hatred, Barack Hussein chose instead to create an inappropriate bond between the miracle of the Creator making clear that Yahweh would move Heaven and Earth on behalf of His chosen people, and the Muslim uprisings.

As Jewish families gather for this joyous celebration of freedom, let us all be thankful for the gifts that have been bestowed upon us, and let us work to alleviate the suffering, poverty, injustice, and hunger of those who are not yet free.

In essence, Obama stressing the plight of Muslims on Passover would be like lecturing the Jews, midway through the Red Sea, on the injustice of bloody water, dead frogs, gnats, flies, sick cows, boils, wild weather, locusts and darkness, or the tragic death of the first-born son of Pharaoh Amenhotep II .

With that in mind, what better way for the modern-day children of Israel to begin the process of agreeing to a Palestinian State than by ceding exclusive rights to Passover?

In the meantime, Obama chooses to ignore school buses filled with Israeli school children being showered with Islamic rockets from Gaza and innocent Jewish families with sleeping toddlers slaughtered in their beds.  Rather than address the ongoing oppression of a nation enslaved by the threat of death on all sides, Obama’s idea of a Passover remembrance is to turn his face from Isaac’s plight and once again focus attention solely on the concerns of Ishmael.