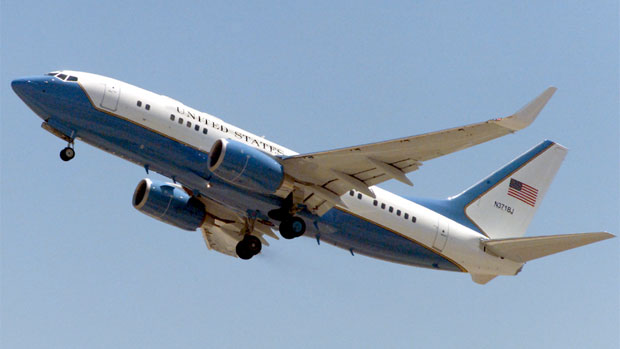 Everyone knows even a small mistake can cost a human life, which is one reason to avoid amusement parks and must be why only 32% of America favors government-controlled health care.  One loose bolt and the chances for survival are slim.   Speaking of loose bolts, it’s been proven time and again that when government employees are on the job, quality is not paramount, anything is possible, and no one is safe.

Case in point: The First Lady of the United States “returning from a television appearance and other events with Jill Biden in New York …was aboard a Boeing 737 that [was] part of the presidential fleet of jets” when “controllers at Andrews feared the cargo jet would not clear the runway in time.”

As a “result of an air traffic controller’s mistake…a White House plane carrying First Lady Michelle Obama came dangerously close to a 200-ton military cargo jet and had to abort its landing.”

A little closer, give or take a mile or two, and budget and birth certificate discussions wouldn’t be the lead story on cable news networks right now.

The incident is important, not only because Michelle came uncomfortably close to a 200-ton disaster, but because Barack Obama plans to place the lives of every American into the hands of equally inept government employees.  With that harrowing thought in mind and now that the presidential fleet of jets have safely taxied to a stop, maybe a lesson can be learned from Mrs. Obama’s narrow escape.

Air traffic controllers are thought to be the cream of the crop amongst trained government employees.  Viewed as elite professionals, they work for a federal agency called the Federal Aviation Administration (FAA). Controllers are highly paid and in charge of the well-being of individuals whose lives depend on alert men and women in the tower paying attention and guiding planes on and off the runway safely.

“These jobs are demanding and require candidates who can think clearly and act rationally under pressure.”  Air traffic controllers are supposed to be landing strip experts, and “During busy times, controllers must work rapidly and efficiently. Total concentration is required to keep track of several planes at the same time and to make certain that all pilots receive correct instructions. The mental stress of being responsible for the safety of several aircraft and their passengers can be exhausting.”

So when it was revealed that controllers had been caught sleeping and watching movies on the job, Secretary of Transportation Ray LaHood was “shocked” and appalled, vowing to address nap time and contemplate extended time between shifts.  However if, God forbid, the airplane transporting the First Lady had tragically collided with a cargo plane while an air traffic controller was watching “Cleaner,” it would have been too little, too late for the First Lady to address the issue of inefficient incompetence.

After disembarking from the Boeing 737, if I were Michelle Obama I would have dropped to my knees, kissed the ground and thanked God an FAA mistake didn’t end my life, a story’s end many baby boomers may be unable to share in regards to Health and Human Services workers determining how and where millions of them land.

If the brush-with-death adrenaline still hasn’t subsided fully, one would venture to guess that even Michelle would agree that the last group of individuals America needs making life-and-death decisions is yawning, distracted government employees, where mediocrity is the norm and apathy is poised, on or off a 737, to threaten everyone’s life.

The moral of the story is that regardless of the occupation, from the Department of Motor Vehicles to the Federal Aviation Administration, government trained employees are notorious for indifference and messing up.

It’s disconcerting, because with health care reform on the horizon, the same guy who still supports a group of government workers that nearly made him a widower has plans to dispatch battalions of bureaucratic health care worker buffoons.  Which means, whether Americans are lying helpless in hospital beds or seat-belted into an airplane, we’re all defenseless, because midway through surgery or while monitoring takeoff or touchdown, it’s guaranteed that if a government employee is on the job, someone is bound to either fall asleep or break for lunch, whether Michelle Obama is onboard or not.