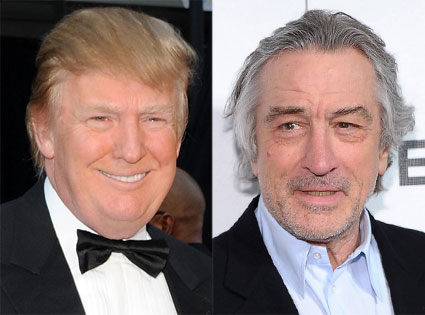 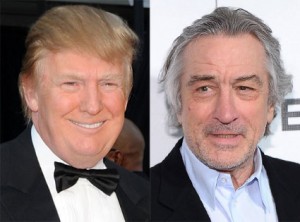 Mrs. Doubtfire, a Taxi Driver, a comedian from Brooklyn, and a guy with “Good Hair” are all criticizing Donald Trump, the guy with bad hair.

While Donald Trump might not be America’s first choice for president, he sure is stirring up controversy.  Let’s face it – if Trump has the chutzpah to wear that hairdo, the guy could care less what anyone thinks of him.

It surprises no one that Hollywood remains the bastion of liberal thought, lifestyle, and politics, and Barack Obama is Hollywood’s golden child. Barack even inspired Scarlett Johansson to utter the words “Yes we can.” As far as we know, even Bill Clinton couldn’t accomplish that feat.

So when The Donald decided to take on The Barry, Hollywood quickly came together to take the spotlight off the Presidential debacle and place it squarely on the guy with the lemon-colored pompadour. On behalf of Barack Obama, Hollywood is – no pun intended – “black balling” the Celebrity Apprentice mogul for daring to question the President’s background.

Hollywood liberals are fine with Obama’s failed presidency – his decimation of the economy, his unending list of broken promises, going to war in Libya, $5 a gallon gasoline and illegals streaming into the mother country called California.  What the Robert DeNiros and Chris Rocks of the world find inexcusable is Trump demanding to see birth and college records.

Wayne ‘Mad Dog’ Dobie and Obama supporter Robert DeNiro, star of “Analyze This,” called Trump’s quest for truth “crazy.” DeNiro told NBC News anchor Brian Williams, “I won’t mention names, but there are certain people on the news in the last couple of weeks — what they’re doing is crazy …They’re making statements about people that they don’t even back up. Go get the facts before you start saying things about people.”

DeNiro called Trump’s “White House aspirations ‘a big hustle’… likening Trump to a ‘car salesman.’” Has Robert DeNiro taken the time to glance up from his script long enough to notice that Barack Obama is on a ‘crazy’ quest to convince America that up is down and down is up?

In response, Trump, the guy who has no problem telling celebrities, “You’re fired!” fired back at Bobby D., pointing out that to question the whereabouts of documentation that after three years suddenly shows up calls into question the intelligence of the critic. Hearkening back to DeNiro’s starring role as Stanley Everett Cox, the illiterate cafeteria cook in Stanley and Iris, The Donald said, “Well he’s not the brightest bulb on the planet… we’re not dealing with Albert Einstein.”

Robert DeNiro is not alone; joining the Trounce Trump chorus is Bill Cosby, who said Donald is “full of it,” and that Trump should “run, or shut up.” Instead, Cosby should have asked Obama to “Put up the birth certificate or shut up.”

Because he’s offended by Eric Trump’s dad asking “Why is Obama’s past so secretive?” Jerry Seinfeld cancelled an appearance at a St. Jude’s Children’s Hospital fundraiser. That decision now puts St. Jude’s Research Hospital’s founder, the late Danny Thomas’ über liberal daughter Marlo, in a bit of a pickle and Seinfeld in the same category as “The Barefoot Contessa” Ina Garten, who initially denied a Make-A-Wish request from a six year-old boy to go to a book signing.

Whoopi Goldberg called Trump’s birther questions “the biggest pile of dog mess I’ve heard in ages!”  Then Ms. Goldberg pulled the race card and asked, “It’s not because he’s black, is it?”

Oprah, the queen of positive vibes who encourages viewers to “Focus on the Good Stuff,” listened as Chris Rock defended Obama by bringing up Trump’s ex-wives and implying that Tea Partiers are childish and “possessed by the devil.” Master interviewer Oprah Winfrey never once asked Rock the question: “Yeah, but why no birth certificate for all that time?”

Finally, but surely not the last to criticize Trump, is Robert DeNiro’s “Awakenings” costar, the sweaty, frenetic, ADD-afflicted comedian Robin Williams.  Looking like DeNiro disguised by a beard, instead of Mork from Ork admitting that voting for a man with a questionable history was a bit of a gamble in itself, Williams said “Trump would turn the White House into a casino.”

Segueing from slot machines to Trump’s comb-over, Robin Williams said, “I believe the hair is actually The Donald. That’s actually the creature.” Robin said Trump’s hair asks him questions, such as “How are we doing today? Who shall we marry next?”

From DeNiro to Goldberg, from Rock to Robin, Hollywood luminaries are predictable when it comes to politics.  However, the unified condemnation of Donald Trump proves one salient point: Hollywood liberals would rather support Barack Obama than admit that Trump asking to see a Certificate of Live Birth or college transcripts isn’t the problem; the problem is, why should he have to?