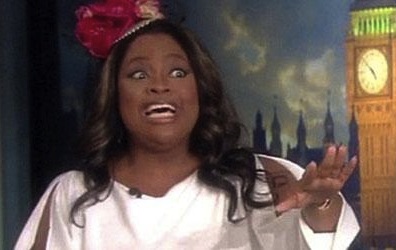 There are people in this world whose main objective is to scrutinize other people’s actions.  Every occasion and interaction is a test. What is said and done is measured against a strict backdrop where one slip-up results in condemnation.

According to Sherri Shepherd of ‘The View,’ apparently not even the royal wedding is exempt from inspection and subsequent judgment.  Seems that while the rest of the world admired Kate Middleton’s Grace Kelly-inspired wedding dress and millions, immersed in history and royal tradition, scanned the crowd for celebrities and marveled at “the English field maples and hornbeams … along the nave,” Sherri focused on something quite different.

Little did the British monarchy know that as Kate proceeded down the aisle of Westminster Abbey to “I Was Glad,” the outspoken host from ‘The View’ was anything but glad and was in the throes of a UK version of a “Rosa Parks moment.”

Sherri Shepherd said she and ‘The View’ producer Audrey Jones had “earlier searched through the footage of guests at Westminster Abbey… looking for the black people in the wedding … because we were like ‘where are the black people?’”

For some, counting numbers of individuals in a crowd based on race is a fulltime job.  Clearly, Shepherd is so obsessed with finding reasons to be offended that, for her, the only thing worth noticing in the 1000 year-old Abbey was the color of the wedding guests.

It appears that in order to pass the “Sherri Shepherd Royal Wedding Test,” the brown-skinned people not only had to be on the guest list, but a passing grade hinged on the seating arrangement.

Why didn’t Sherry just accuse the royals of leaving Barry and Shelley home based on the color of their skin? All that was missing from the commentary was a cartoon light bulb turning on above Shepherd’s pink-feathered fascinator, prompting her to share how the royal family exhibits racist tendencies because the Obamas were forced to watch the nuptials on TV instead of from the VIP section of Westminster Abbey.

Some of the ladies on the talk show are famous for being racially offended. A few days prior to the royal wedding, Sherri’s co-host Whoopi Goldberg clarified the impetus behind Sherri’s view. While opining on withheld birth certificates and men with captivating coifs, Whoopi gave voice to the racial test mentality Sherri exercised when Goldberg said:

Following Whoopi’s lead, Sherri Shepherd, while commenting on the royal wedding, joined ranks with those on the left who have decided to stop trying “not to find things slightly racist” and commenced with “playing the damn card now.” Ms. Shepherd’s counting up what she thought was a shamefully limited number of black guests in the cathedral seemed to imply that the royal newlyweds belonged in the same racist category as Trump, Fox News, the Tea Party and anyone else who goes about their business refusing to be fixated on skin color.