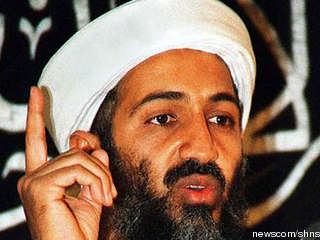 After shooting Osama bin Laden in the face, tossing him into a helicopter and taking a DNA swab from somewhere on his body, out of respect for Islamic religious sensitivities the mass-murderer was given a burial consistent with Muslim religious custom.

The mastermind of 9-11, whose actions resulted in incineration, pulverization and crushing death from falling 100 floors, was respectfully treated to a five-point preparation of a Muslim’s body for burial.  A proper interment is a humane consideration and something bin Laden deprived 1,000 victims of September 11th who are yet to be identified.

According to Muslim tradition and in preparation for burial, “Ghusi,” or body washing, is “obligatory.”  If the terrorist’s body was not washed before tossing him overboard, “all Muslims [would] be accountable” for sending him into eternity as the despicable wretch he was.

After being brought aboard the USS Carl Vinson aircraft carrier, bin Laden was washed by a man—preferably someone who knew the deceased.  Because Osama’s mug has been plastered on “Wanted Dead or Alive” posters all over the world for ten years, claiming not to know the guy would not have been a valid excuse to beg off giving the dead al Qaeda leader a bath. Either a low ranking seaman was ordered to sponge him down, or some brave soul volunteered to remove Osama’s hemodialysis catheter before bathing all 6’4” of his high-priced frame.

If traditional burial practices were followed, instead of splashing him with the kinds of substances he deserved, someone in the United States military was commissioned to place the terrorist, naked, on a “high place,” with his private parts covered, and forced to wash him with clean water infused with non-alcoholic scented oils and a cloth.

In order to prepare bin Laden to meet with the 72 virgins awaiting him, the terrorist mastermind would be washed at least three or more times, but always in “odd numbers,” with a heavy emphasis on the “odd.”

If there were anything left of them, ablution or wudi would have had to be performed, which is cleaning Osama’s teeth and nose. The big galoot would be turned left, then right for the first and second time, washed with soap and water, followed up with water and scent on number three.

Wonder who did the honors, washing and combing his hair? Maybe America’s finest did Osama proud and sent the ole boy off with a coiffure befitting his celebrity status.  After toweling his cadaver down, ritual dictates perfume be dabbed on his “head, forehead, nose, hands, knees, eyes, armpits,” and perfumed cotton placed on the “front and rear openings.”

Osama’s body would then be wrapped in a clean cloth. Muslims prefer white, but it would have been appropriate to wrap Osama in a blanket embroidered with a large NYFD logo.  According to Islam burial rites, the three-piece kafan tied at the head and feet should be perfumed with non-alcoholic scents, which is where a good, strong, seafood-compatible BBQ sauce would come in handy.

Next comes the praying. But not like the praying that went on as the doomed Americans Bin Laden murdered begged for help from inside an inferno, or the type of desperate pleas coming from the passengers on the planes that crashed into the Pentagon or the field in Shanksville, Pennsylvania.

If true to ceremonial criteria, Osama bin Laden’s pre-burial prayer session could have included an Imam and a group which “divided themselves into three rows facing the gibla,” which is the shortest distance to Mecca.

According to Muslim burial rites, the prayers uttered by those tending to his corpse likely contained the frequent repetition of the familiar pre-slaughter utterance “Allahu Akbar,” spoken by terrorists like Nidal Hassan, a reading from the Quran, and a litany of incantations.

Islam recommends silence for the funeral.  In fact, “It is absolutely forbidden to accompany the body with music or crying.” That’s where cries of joy and heavy metal accompaniment from Metallica would set the Dump bin Laden tone perfectly.

According to Muslim tradition: “The grave should be deep, wide and well made,” which perfectly describes the salt-water tomb where the 40 U.S. Navy Seals made sure that, from now on, Osama bin Laden would “sleep with the fishes.”

After all is said and done, at Osama bin Laden’s private burial, unlike many of those he murdered, there were no Scottish bagpipes, solemn processions of fire trucks, mourning widows or children left without a father.  Although treated to a Muslim-style pre-burial preparation, in the end the brute received a red, white and blue send-off complete with weigh-you-down cinder blocks and a humongous deep-sea splash.