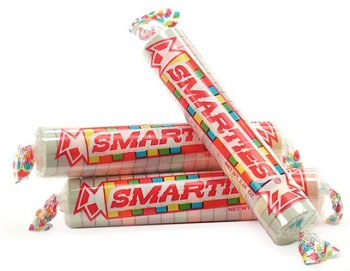 A Michigan Middle School principal has banned ‘Smarties’ and ‘Pixy Stix,’ a fruit flavored tablet and powdery sugar in a straw “because students are believed to be inhaling the sugary treat[s] as they pretend to smoke … possibly causing maggots to feed off the students’ noses.”

Candy is not the only culprit; school districts all over America are joining Northern Hills Middle School in taking child safety to heart by making radical executive decisions like banning chocolate milk from school premises.

All the same, the candy craze is not limited to Michigan. Kids in Oregon and California have also been caught making smoke rings with crushed candy, causing alarm among lunch monitors, teachers, and school administrators.

Thankfully, for the sake of smoking children as well as those who just chew bubble gum, “This type of smoking does not require a match light.”  However, “it can cause some significant health issues,” like sugar highs and sticky hair when the candy dust cloud eventually lands.

According to Principal Susterka, “candy is crushed and then re-rolled into a cigarette looking type object,” kind of like the ones the kiddies roll when smoking doobies.  Then the candy is “inhaled which can cause infections, chronic coughing, choking and even maggots feeding off the sugar coated area in your nose (very extreme cases),” like when a fly lands in close proximity to your left nostril.

Dr. Holger Link, a pediatric pulmonologist at Doernbecher Children’s Hospital said he “researched medical case reports and found no record of harmful reactions from Smarties” and laughed at the maggot suggestion.

The larger question here is: Haven’t these people ever toked on a candy cigarette?

To date, the jury is still out on the artificial flavors and colors, but so far dextrose, corn syrup, maltodextrin, citric acid, and calcium stearate have not caused irreparable “brain damage” or provided the kiddies with the added bonus of a “typical buzz.” Even still, there is the “potential of choking on the aspirated wrapper or large chunk of uncrushed candy,” a hazard also associated with banned chocolate milk and nitrate-infused hot dogs.

Principal Susterka summed up her correspondence to candy smokers’ parents by telling them something they didn’t already know, which is: “The bottom line is this isn’t good and there certainly aren’t any nutritious benefits from the consumption of this candy.”  Then again, candy smoking does have benefits over cigarette smoking, especially for junior high school girls taking birth control pills, which like Smarties also come in a charming array of colors.

While most public school educators agree that handing out condoms to young impressionable school children does nothing to promote teen “sex” – safe or otherwise – it does seem that although not technically a drug, smoking Smarties can encourage the “behavior of inhaling,” which may be “attributed to the use of other inappropriate substances.”

One student in California said, “I thought it was pretty cool.  It tasted good,” a pleasurable pursuit that sounds strangely like “If it feels good do it,” which apparently still applies to school age children for everything except candy.