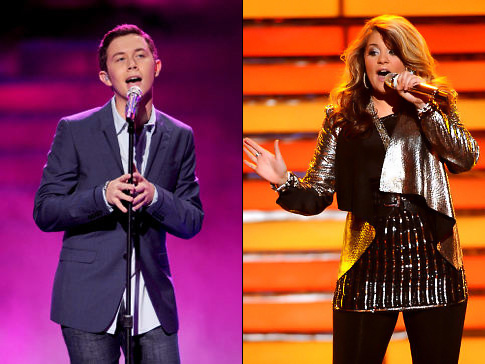 After three endless years of Barack Obama being more popular than Jesus, God and country seem to be making a huge comeback. If this season’s American Idol outcome is any indication of what lies ahead in the next election, Barack Obama may be heading back to the home of Muddy Waters and the Chicago Blues.

Interestingly, on American Idol each week those eliminated, with the exception of a Rod Stewart wannabe from Alabama, returned home to blue states.  Even the stunningly talented Pia Toscano, who was thought to be a shoe-in, was sent packing back to the blue shores of Howard Beach, NY.

Besides being entertained by judges J Lo, Steven Tyler and Randy Jackson, this season American Idol has showcased talent from all along the musical spectrum. America was wowed by James Durbin, whose voice embellished raucous heavy metal; Pia was crowned the queen of ballads; Casey Abrams entertained America with a scruffy eccentric brand of stand-up bass showmanship; Haley Reinhard emerged as a polished version of Janis Joplin; and a cuddly promise of Luther was reborn in the endearing Jacob Lusk.

Yet, throughout the competition and despite the huge talent pool, country singers Lauren Alaina and Scotty McCreery endured from week to week. One thing about Lauren and Scotty that stood out was their consistent profession of personal faith and loyalty to a patriotic genre of music that unabashedly celebrates both God and country.

Scotty McCreery is the all-American freckle-faced kid with his head cocked sideward, sporting the huge crucifix and a constant grin, renowned for singing sideways into the mike. Lauren is the sweet 16 country singer from Georgia who admitted she prays before going out on stage and whose face belies her adolescent shock each time she’s put through to the next round.

All of the eliminated American Idol contestants experimented with different songs, styles and musical identities. Scotty and Lauren didn’t; both remained true to prayer, God, and the red, white and blue with songs like “Where Were You (When the World Stopped Turning)?” Young Lauren even reminded a nation fraught with hardship that ‘God is great’ “Anyway.”

Throughout the season, Scotty’s wrist was adorned with an “I am Second” bracelet, which represents a movement that encourages people to live for God, not for government, the right to choose, saving the planet, or Barack Obama. The ‘Yes We Can’ that McCreery promoted was about putting God first and Scotty second, and the American Idol audience loved it.

Curiously, Obama, who usually makes a seasonal appearance on Idol to remind Americans who is worthy of being idolized, didn’t show up for the “show’s youngest-ever, and first all-country music finale.” President Obama hosts music nights and even welcomed rapper Common to the White House, but to date has yet to invite “Independence Day” Martina McBride and will likely never have the outspoken conservative fiddler Charlie Daniels over for a Super Bowl Party.  Why?  Because country music is alien to everything Barack Obama represents.

Secular rock-and-roll/will.i.am America put Obama in the White House in 2008. America cheered as Obama exhorted the nation, saying “this was the moment when the rise of the oceans began to slow and our planet began to heal.” Lest we need reminding, thus far neither has happened.

With the election one year from now, Obama should take note – country music, with its huge red state audience, prevailed on American Idol with its “Jesus Take the Wheel…Courtesy of Red, White and Blue” lyrics.  The season is over, the votes have been tallied, and after praying backstage, Mom, apple pie, George Strait “Heartland” songs, and two fresh-faced red state/church kids are all the winners.

This season the American Idol vote may be saying more than who is the best singer on a primetime TV show. It may be that America is fed up with President ‘Hope and Change’ Obama being more concerned with Muslim outreach than upholding the Judeo-Christian foundational values of America. Maybe our country is sick of its President apologizing for a nation that patriotic Americans know and love and believe is at its core intrinsically good.

If America’s response to Lauren Alaina and Scotty McCreery’s emphasis on God and country is any indication of what will be inspiring voters in the next election, in the words of Scotty McCreery’s favorite Montgomery Gentry song, in 2012 former American Idol Barack Obama may be the one who finds himself “Gone.”