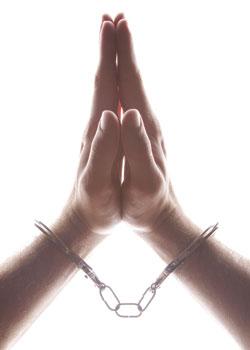 Agnostic parents Christa and Danny Schultz filed a lawsuit because they were worried that if their son Corwin were to be exposed to prayer at graduation the lad would “suffer irreparable harm.” Therefore, in the interest of shielding the youth from exposure to permanent injury, Judge Biery declared the graduation a prayer-free zone.

Ayesa Khan, the attorney representing the Schultz family, “was delighted in the judge’s decision.”  According to Ms. Khan, concern over exposure to religious prayer caused her client “a great deal of anxiety.”  So much so that young Schultz had previously “gone to meet with the principal to try and talk in a civilized way about long-standing problems.” Khan said Corwin claimed the “school district … continued to thumb its nose,” which implies that school administrators allowed students to publicly express their faith and use disquieting words like “prayer” and “amen.”

According to Texas Attorney General Greg Abbott, Biery “left the door open for individual expression of religious belief” by granting immunity for wearing religious garb, kneeling toward Mecca, and making the sign of the cross. Despite the limited dispensation, the district still seeks an emergency ruling to overturn the judge’s prayer-restrictive edict in time for graduation.

The attorney general believes that “Part of this [ruling] goes to the very heart of the unraveling of moral values in this country,” saying the judge “wanted to turn school administrators into ‘speech police.’” Abbott said he’s “never seen such a restriction on speech issued by a court or the government,” and maintains that the ruling “seems like a trampling of the First Amendment rather than protecting the First Amendment.”

Apparently, “trampling” the Constitution is justified if it spares an agnostic from anguish.

Much to Schultz’s relief, in addition to offensive words like “prayer” and the always stress-producing “amen,” the speakers at the commencement ceremony are also restricted from uttering banned phrases such as “join in prayer,” or asking guests to do the unthinkable and “bow their heads.”

In fact, if the ruling stands, it may be in the graduates’ best interest to leave iPods loaded with songs like Kid Rock’s “Amen” and “I Say a Little Prayer for You” home for the day.

Speakers are also prohibited from committing the ultimate offense, which is uttering the words: “in [a deity’s name] we pray.” Since everyone knows the deity who customarily fits between the brackets, there’s no need to risk arrest by mentioning His name here.

In any case, this is serious business, because if the ruling isn’t overturned and if someone dares violate the order, school officials face legal trouble. Judge Biery hopes to spare Corwin Schultz angst by ordering the ruling be “enforced by incarceration or other sanctions for contempt of Court if not obeyed by District official (sic) and their agents.”

Stunned that “one kid can come in and change what’s been a tradition since Medina Valley started,” student Abigail Russell lamented that “at graduation, [she] would love to be able to speak from [her] heart.” That’s a commendable sentiment, but if things go Corwin’s way, Ms. Russell will have to come up with an innocuous secular speech, or possibly wear her mortarboard to jail.