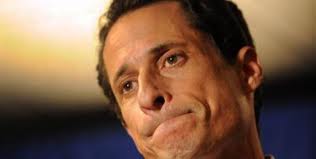 Anthony Weiner (D-NY), one of the most arrogant, self-impressed individuals ever to occupy an office on Capitol Hill, was caught with his pants down in the truest sense of the word.  When Representative Weiner stepped behind the podium to address his Twitter picture controversy, he looked like he was going to explode from humiliation.  Seeing a person so demoralized caused my kinder, gentler self to actually have a millisecond of pity for the New York congressman.

It was uncomfortable to watch a sniveling, visibly disgraced Weiner admit that he lied about sending lewd pictures of himself to young women.  However, my strange sensation of sympathy quickly dissipated, because the whole sordid skivvy-Twitter incident confirmed what I’ve suspected for a while: Anthony Weiner oozes with contempt toward women, and that contempt manifests itself in many different ways.

Take for instance Kirsten Powers, the Fox News analyst who once dated Anthony Weiner.  Powers called Weiner “very sweet, very funny,” and “very charming.” After three months, Kirsten found out the hard way that Anthony is none of the above. Powers said she was “shocked when [Weiner] broke it off. I think he’s the only guy who ever dumped me!” said Powers.  “I think he probably dumped many girls. I don’t think it was that big of a deal.”

Weiner has prided himself on being a smarmy, imperious, liberal know-it-all that speaks to political adversaries, especially the female ones, in a debasing manner that borders on verbal harassment.

In interviews and press conferences, the pushy, smirking Weiner has rudely tried to set the rules, even calling reporters “jackasses.” The congressman’s body language implies that whomever he’s debating is beneath his exalted self.

For years, Weiner has played Democrat pit bull on Fox News, sparring with America Live host Megyn Kelly. Whenever Ms. Kelly disagrees with Weiner’s rabid liberalism, the congressman attempts to steer the conversation by pummeling the Fox anchor with an assault of interruptions and insulting comments. In one contentious interview, as soon as Megyn gained the upper hand Weiner responded by demeaning her professional skills, telling her, “This is the way interviews work, you ask the questions and then I get to answer.”

On more than one occasion, Weiner has also subjected congressional colleague Michele Bachmann (R-MN) to similar disrespect when debating the debt ceiling, spending, and tax cuts. Seething with condescension, Weiner once attempted to set Bachmann up by mockingly asking her trick questions to try to trap her and make her look foolish.

Now, after years of Anthony Weiner accusing everyone of lying, it is revealed that the self-righteous Democrat congressman broke his marriage vows to wife Huma Abedin, the longtime personal assistant of another woman also humiliated by a sex scandal.

During Weiner’s apologetic press conference, the public found out his indiscretion was probably not a surprise to his wife.  The New York Representative confessed to the press that in an outpouring of soul-mate honesty he had discussed his lack of Twitter decorum with his wife-to-be prior to their wedding. Then after the honeymoon, while Huma was tailing Mrs. Clinton, contemptuous Weiner was tailing attractive young women on Twitter and Facebook.

In fact, when the Weiners married last year, former President Clinton, the king of all womanizers, officiated at the ceremony. Although Bill Clinton doling out wedding blessings is like David Hasselhoff being a guest speaker at an AA meeting, during the Muslim/Jewish ceremony the ex-president did share some prophetic wisdom gleaned from personal experience: “Marrying a politician can be tough because it’s easy to distrust them, whatever their religion.” Amen to that.

Huma should have heeded Bill’s insightful counsel because while she was busy assisting Hillary, Internet security specialist Anthony Weiner was home, snapping suggestive pictures of himself and sending them to 198 women, some of whom may turn out to be teenagers.  Weiner disrespected women who were total strangers by having phone sex with these female “friends” and burning up the social network in an attempt to cultivate self-gratifying cyber- sexual relationships with people he’s never even met in person.

After being busted by Andrew Breitbart, the only journalist brave enough to do the work the left wing media refuses to do, Weiner immediately exhibited additional contempt – this time for the truth, Huma, his constituents, and the public. The disgraced congressman lied not once, but repeatedly, until he was cornered with proof of his salacious escapades – photos, phone records, and a multitude of women stepping forward to tell the story that the congressman, supposedly out of humiliation, refused to admit.

Yet, after all of that, it was at the podium that Weiner’s condescending aggression made itself crystal clear:  After the congressman, in a Jim McGreevy moment, admitted his weakness and that what he did was immoral and hurtful towards his wife, he shifted into his standard conceited operating mode and announced he had no plans to step down – a revelation more shocking than the shot of Weiner in tight boxer briefs.

And so, the most disturbing aspect of this lurid story is not the congressman’s bawdy behavior online, but his insolence toward the American people, toward Congress, and toward the state of New York. Despite his admission of guilt, Weiner’s thorough contempt for women has not vanished; it’s been expanded to include the rest of America.