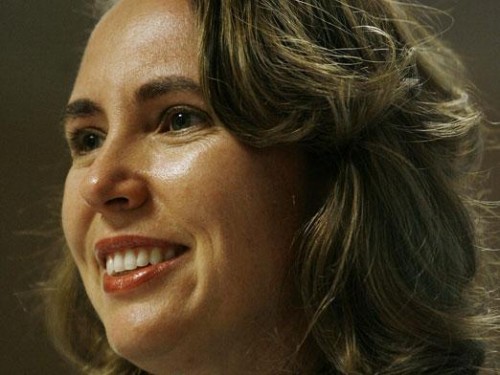 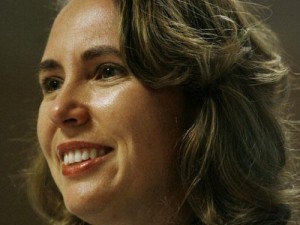 Gabrielle Giffords from Arizona’s 8th congressional district is “a book lover…motorcycle rider; pro-choice and pro-gun…former registered Republican-turned-Blue Dog Democrat.” Tragically, on January 8, 2011 Ms. Giffords was viciously cut down by a bullet that pierced the left side of her head.  The congresswoman was shot by a madman named Jared Loughner at a meet-and-greet in what turned out to be a not-so-safe Safeway parking lot in Tucson, Arizona. Gabrielle was one of 19 people shot that day; she was one of 13 who miraculously survived.

Although Gabrielle is a moderate Democrat, her 100% NARAL rating has been a huge disappointment to many on the right who otherwise admire her politics. Yet, Gabby being pro-choice has not prevented even her most ardent political adversaries from wishing her well and praying God grant her a full recovery.

Until the photos of Gabby were released, it was impossible to really know the full extent and toll those devastating wounds took on the slender smiling woman with the welcoming way. The photos tell only part of the story.

Gabby’s long blonde hair is no longer there; what remains is a short, dark, uneven pixie cut and although the media, trying to be kind, are saying there are “…but few other telling signs of the gunshot wound to the head,” their assessment isn’t entirely truthful.

Gabby’s spirit certainly shines through.  However, her warm smile and direct gaze into the camera don’t distract from the lifesaving tracheotomy scar clearly visible in the center of her throat.  Also impossible to ignore is the side of Gabby’s head which, without a word, tells the tragic tale of grave and unnecessary harm.

It’s been just a month since “doctors repaired Giffords’ skull, finally freeing her from a cumbersome protective helmet that her staff members say she hated.”  Congresswoman Giffords went from wearing a stunning houndstooth jacket on Capitol Hill to wearing a protective helmet while receiving rehabilitation at TIRR Memorial Hermann hospital in Houston.

Although Gabby Giffords appears to be healing and her recovery has supposedly “impressed doctors,” the hard truth is that an insane stalker’s bullet cruelly cut down an innocent person in the prime of her life and it remains to be seen whether the future will see her vitality and potential restored.

Sadly, the once articulate Giffords now has “difficulty stringing together sentences.” In order to communicate and express herself, Gabby is forced to rely “heavily on gestures and facial expressions.”

Giffords’ doctors do say that “With Gabby, what we’ve been able to infer and what we believe is that her comprehension is very good…close to normal, if not normal.” Regardless of the hopeful prognosis, so far thanks to Jared Loughner the gentlewoman from Arizona will not be beckoned to the House floor anytime soon to read the First Amendment.

All the same, what the two Giffords photos purport to show is “how far [Gabrielle] has come since she was wounded in the left side of her forehead.”  Her spokeswoman, Pia Carusone, warned that regardless of how she appears in the pictures, “Ms. Giffords still has a long way to go,” and shared the shockingly sad reality that lovely Gabrielle “remains [but] a shadow of her former self.”

The pictures of Gabby Giffords are bittersweet, arousing both optimism and a sense of melancholy in light of the unjust nature and almost guaranteed permanency of her situation. Looking at her face, images of yet another tragedy are unexpectedly stirred and rise to the surface.

America too, like the Arizona congresswoman, has been critically wounded.  Not by a bullet meted out by a lunatic, but by a President and a political party that have inflicted chaos and ruin upon an entire nation. Thanks to an inexperienced, socialist-leaning, liberal politician who was convinced he knew a better way, in what seems like mere seconds a nation that believed his empty rhetoric has subsequently been reduced to a mere “shadow of [our] former self.”

For Giffords, hope prevails. Gabby’s “release from the hospital [will] mark an important step in her recovery.” For America, the year 2012 holds the potential to deliver national healing. After the next presidential election, America too will require months or even years of post-Obama economic, social and political rehabilitation to recover from a close call with death and destruction.

Nevertheless, despite the shameful politicization of her shooting, witnessing the extraordinary occur in Gabby Giffords’ life should impart renewed hope to a land and a people struggling to surmount a near-lethal political experience.

The injured congresswoman offers America an opportunity to seize upon the spirit of a survivor and to remember that although our nation is critically wounded, we will likewise be restored to the freedom and prosperity enjoyed prior to the ill-fated election of Barack Obama.