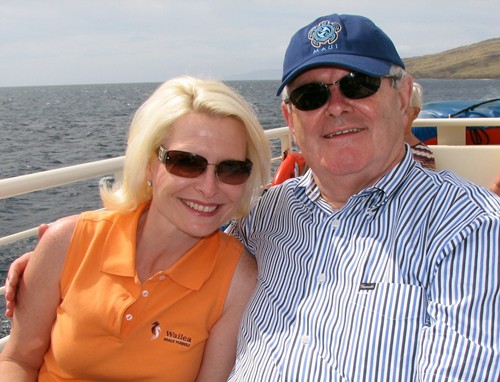 This week America found out 16 members of presidential hopeful Newt Gingrich’s campaign staff up and quit! When hearing about the mass exodus, the immediate thought that came to mind was: “Callista!” Why? Because ever since Newt Gingrich snagged himself a wife 22 years his junior, “he’s been acting like a lovesick school boy.”

Callista Gingrich certainly looks prim and proper and considers herself a “devoted Catholic.”  In fact, Mrs. Gingrich even sings in “the Choir of the Basilica of the National Shrine of the Immaculate Conception in Washington, DC.”  Yet, to this day it’s still hard to get past the fact that when not singing Ave Maria, Callista apparently had little problem dating the husband of a woman deep in the throes of MS.

After a quarter century and a two-part documentary entitled “Recovering God in America,” the couple now claim that while Newt was vilifying Bill Clinton for immorality and leading the charge for his impeachment, their adulterous relationship merely had a “non-traditional start” – a start that, at the time, ambushed Newt’s promising political career.

With her “double strand pearls” neatly in place, Callista dated and married Newt Gingrich, and while always “adamant about going to Mass,” not that it’s a bad thing, convinced the former Speaker of the House to convert from a lifelong Southern Baptist into a born-again Catholic. French horn player Callista even managed to wangle her way into the lofty position of “President” of Gingrich Productions.

Callista’s demeanor is indicative of a woman whose shoeboxes are probably well organized.   Now we come to find out that her jewelry drawer is full of trinkets bestowed upon her by her “fiscally conservative” senior citizen lover/husband Newt.  According to financial disclosures filed with the Clerk of the House of Representatives, “In 2005 and 2006, the former House speaker turned presidential candidate carried as much as $500,000 in debt to the premier jewelry company.”

Evidently, the little woman is doing one helluva bang-up job over there at Gingrich Productions.

Callista must have been worth the losses Gingrich’s political career sustained, because for years now the twice-divorced, thrice-married Newt Gingrich hasn’t been able to complete a single sentence without mentioning Callista’s name.  Every other word out of the former House speaker’s mouth is “Callista and I” this and “Callista and I” that.

Gingrich’s adulterous relationship reduced the once powerful speaker from a potential presidential contender into an infatuated doughboy being led around by a woman with very stiff bleached blonde hair.  The only person in Mrs. Gingrich’s league is tomcat Rudy Giuliani’s wife, nurse Judy, a woman with a nonstop grin and wide-eyed stare rivaled only by Callista’s.

One thing’s for sure – after this week, it seems Callista hostessing White House state dinners is no longer a threat. The peroxided paramour who helped administer the death blow to Newt Gingrich’s political aspirations in the 1990’s, after all these years of trying to remediate his sullied reputation, has again managed to put an end to a potential bid for the White House. Only this time it’s over a Mediterranean cruise.

Political consultant Rich Galen, who worked for Mr. Gingrich in the 1990’s, said “We have all had to deal with campaign spouses, whether male or female. But in this case it appears that Speaker Gingrich may have been a lot more solicitous to his wife’s desires and her interventions in the campaign than most candidates are.”  Ya think?

Fred Barnes, editor of the Weekly Standard, claims Callista “won the argument” with campaign managers about whether or not the couple should take the voyage on board the Seabourn Odyssey. So this time, Callista managed to shipwreck Newt’s presidential bid over a cruise to Greece and Turkey. Newt’s decision to submit to Callista “was the last straw for his campaign team,” most of whom decided to take a permanent vacation not with, but from, Mr. and Mrs. Gingrich.

Truth is, if a meat-packer’s daughter wields the power to convince an influential political power broker to install her as the president of his corporation; abandon a sick wife; convert from Protestantism to Catholicism; and run up a half-million dollar tab at Tiffany’s, then wants to take a vacation, it’s not likely she’ll take “No” for an answer.

Fred Barnes, assessing Newt Gingrich’s tendency to make poor choices, confirmed something that’s been obvious to many of those on the right for awhile: “The problem [is Newt’s] wife.”

Same as she did back in the 1990’s, according to Barnes, this year “Callista Gingrich gradually emerged as Gingrich’s most influential adviser.” Like the pied piper of love, on her French horn Callista Louise tooted out a couple of bars of the “Love Boat” theme, pointed toward the gangplank, and like a smitten lap dog Newt followed the blonde in the pricey bling, and in so doing probably sealed his political fate.