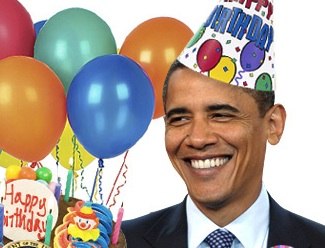 After struggling with noncompliant Republicans over the debt-ceiling debate, in what appears to be an effort to soothe his “agitated” self, President Obama has scheduled a high-priced 50th birthday bash in honor of the day he graced the planet with his greatness.  The news comes just days after Obama was lamenting the burden of having to keep “hundreds of thousands of [unnecessary] dollars in additional income.”  The President encouraged people to take the extra money that would otherwise provide stuffing for the worn-out mattresses Americans haven’t been able to replace in a recession and look for an opportunity to help a brother or sister in need.

Barack’s Birthday Bonanza has been scheduled for August 4th — the day after the United States of America is due to officially downshift from the black into the red. The festivities should be a pleasant albeit bizarre distraction from the weeping and gnashing of teeth taking place outside the walls of the concert hall, if the nation actually defaults.

Either way, the elaborate Chicago event will serve as an all-in-one Obama 2012 campaign fundraiser, concert, and birthday celebration.  The affair comes complete with celebrities, crooning, swooning, and singing praises to the man who just needs more time to usher in the Hope and Change he’s yet to deliver thanks to obstacles like former president G. W. Bush, the intractable Eric Cantor (R-VA), and the perpetually pesky Fox News.

Still, Obama exhorting self-sacrifice one day and then charging to attend a function in his honor the next is where this party thing gets a little dicey.

The entry fee to get into the Aragon Ballroom for Barry’s big day will cost well-heeled couples a large pile of the type of “additional income” Obama just the other day suggested they should give to the needy. Without having to win the “Dinner with Barack and Biden” raffle, donors willing to part with $35,800 get to enjoy a private dinner with the President and VIP seating at a birthday concert rumored to be featuring native Chicagoans.

Spending thousands of dollars worth of “additional income” to see Obama blow out 50 birthday candles isn’t exactly the type of altruistic endeavor the President promoted when he mentioned parents struggling to pay college tuition.  Nevertheless, at least the President is doing a good deed by helping ease the burden he suffers daily of having to keep “additional income” that could be put to better use.

Heaven knows most people can always manage with a little less, and even if they can’t, the President is convinced that most Americans, regardless of their situation, have more than they actually need. In fact, the real reason behind the President hosting a function where he’ll stuff disposable cash into his campaign coffers, contributed by anyone willing to cough it up, is to reaffirm his commitment to training the nation to make do with less.

President Obama is even making sure, regardless of economic strata, that “shared sacrifice” is truly shared.  At the birthday show, there’ll even be a limited-availability $50 “neediest among us” section for those who view the cost of admittance as an investment in an Obama second term, where he’ll have another chance to fulfill his promise to provide free gas and monthly mortgage payments to those still having trouble making ends meet.

General admission will be more costly for the wealthier devotee who would rather splurge on a $200 glimpse of Barack Obama across a crowded ballroom than contribute “additional income” to a family in need of groceries.  For those who don’t consider a party a real party without access to adult beverages, the evening will cost $1000 worth of “additional income” to clink glasses with likeminded people in between rounds of party games, which could include Pin the Tail on the Donkeycrat.

Finally, one semester’s worth of tuition monies that could assist a struggling family with college-age children will purchase birthday celebrants a photo with the guest of honor.  Funny, wasn’t it just yesterday that Obama hammered away at top earners and corporate jet owners who, ironically, are the only ones with the money to plunk down $10,000 for a $5.99 prom-photo-quality souvenir featuring a smiling President with pockets full of evil rich people’s “additional income?”

As Barack Obama tries to decide whether or not to have Jennifer Hudson sing what is fast becoming the perfect Obama Victory Fund 2012 theme song – “And I Am Telling You I’m Not Going,” the President’s insolvency/$35K per couple birthday party will provide the perfect milieu to juxtapose against the monetary mayhem wreaking havoc across the nation.

However, there remains one glaring contradiction surrounding the expensive social event, which is that the festivities are being financed with donations gathered from the very people Barack Obama has just criticized for hoarding the “additional income” they need to afford entry into a high-priced shindig like the one he decided to throw for himself.

In the end, the Barack Bankruptcy/Birthday Bash, which will likely feature a 10-tiered “Yes We Can” birthday cake, turns out to be another opportunity for the President to illustrate to the American public he’s dead serious about his refusal to bow to spending cuts, and he’s willing to pull out all the stops to prove it.  In addition, Barack can use the event to clarify his recent comments concerning Americans giving money they don’t need to the needy and explain that the only time charitable “shared sacrifice” gets a pass is if those with extra funds decide to shower those extras on him.