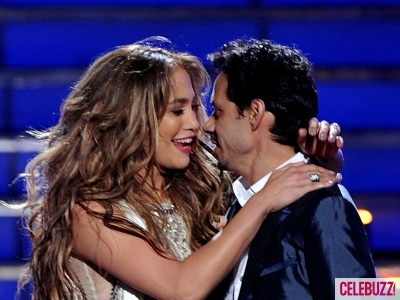 This year things were really looking up for the world’s most famous Latino husband and wife team. First, Jennifer Lopez and Marc Anthony were invited to Barack Obama’s intimate Super Bowl Party, and then Jennifer joined Randy ‘Big Dawg’ Jackson as one of two new American Idol judges, the other of whom was Steven Tyler of Aerosmith.

In April Jennifer talked to People magazine about her beauty regimen and used the occasion to effusively gush that she is the “happiest” when she’s “home with husband Marc Anthony and their 3-year-old twins, Max and Emme.”

On the American Idol finale, Marc Anthony, who played Hector LaVoe, and JLo, who played Puchi in the movie “El Cantante” treated the public to a steamy exhibition of marital affection. Marc, accompanied by Shelia E, performed the vocals and music from the lively “Aguanile.” As an added attraction, Mrs. Anthony emerged in a fringed Dancing with the Stars outfit and proceeded to do a bootylicious salsa.

Just 90 days after Jennifer’s “happiest at home” interview and two months after she whispered what appeared to be a naughty remark in her husband’s ear on the stage of the Kodak Theatre, the pair announced their seven-year marriage is over.

Between the two of them, the Anthonys have managed to rack up five official marriages, six children, and a long list of ex-lovers. Jennifer was once married to restaurateur Ojani Noa, who’s presently shopping around a steamy “home video” starring a conjugally-preoccupied Lopez and Noa. Jenny’s split-second-long second marriage was to Chris Judd, her Love Don’t Cost a Thing backup dancer.

After divorcing Judd, Jennifer quickly assumed one half of the famous Ben Affleck/Jennifer Lopez engaged hot couple duet – affectionately referred to in the tabloids as “Bennifer.” At the time of that romantic betrothal, Jennifer said that “her feelings for Affleck [were] ‘bigger and realer’ and ‘totally different’ from anything she [had] felt before.”

Marco Antonio Muñiz’s relationship history is a little less glamorous.  Marc has a daughter, Arianna, from a prior relationship with a New York City police officer. The Latino crooner started up with the “The World’s Most Beautiful Woman,” Jennifer Lopez, in the midst of his divorce from former Miss Universe and mother to his two sons, Dayanara Muciz (née Torres) Delgado.

Marc Anthony married Jennifer Lopez a few days after his divorce from Dayanara was final. Then, after just four years of marriage, Jennifer and Marc were rumored to be separating. It was then that Marc Anthony did with Jennifer what he did after being estranged from Torres – he renewed his marriage vows.  In fact, Mr. and Mrs. Anthony-Lopez renewed their vows once in 2008 and again in 2010 – a sure sign that something in JLo Land was in dire need of constant revitalization.

In 2010, in an interview featured in Latina magazine, Jenny admitted that “marriage isn’t easy,” but that “everything” about hers “is great.” The question is:  If the marriage was so “great,” what happened?  How could two soul mates with so much shared cultural heritage just throw away seven years of committed love, leaving in its wake two adorable tots whose impending birth was announced in Miami before 10,000 adoring fans?

One thing’s for sure, it’s no secret that in addition to tax evasion and an affinity for beautiful Latina women, Marc Anthony has a reputation as a bit of a control freak.  The man even went so far as to install himself as an uninvited fourth American Idol judge, coaching Jennifer on picks and advising Season 11 contestants.

The year started with God-only-knows-what going down on the buffet line at President Obama’s Super Bowl party and ended with randy 20-year-old American Idol contestant Casey Abrams planting a wet one on Jen’s perfectly lined bee-stung lips. With JLo’s newfound star power, it’s probable that Marc Anthony found himself under pressure on more than one occasion to suppress reacting to strange men fawning over his wife, whose sultry exhibitionism is the basis of her successful career.

One instigating factor in an already tense situation might have been the awkward decision to feature JLo’s former lover Sean “P. Diddy” Combs as a performer on American Idol. Diddy still openly professes affection for the woman he once attempted to woo back with 100 white doves and 100 pink balloons, and having him on the show probably went over like a lead balloon with Marc Anthony.

Then, one week prior to announcing an end to the marriage, JLo arrived accompanied only by mamá Guadalupe Lopez at the BAFTA/Duke and Duchess of Cambridge event, wearing a skintight asymmetrical green Emilio Pucci number which gifted the handsome Duke with an up-close and personal view of the soon-to-be ex-Mrs. Marc Anthony’s famously rock-hard abdominals.

Between the excess baggage, former lovers, lack of adequate clothing, and the huge egos, like most Hollywood couplings the marriage was doomed from the start.  The only real surprise is that this one managed to last seven years.

Whatever the reason for the split, the Marc Anthony-Jennifer Lopez divorce proves once again that in Hollywood, marriage has no meaning, and neither money nor fame possesses the power to keep families together.  The only question that remains for the future is whose name will replace Ojani, Chris, Ben, Sean and Marc the next time Jennifer Lopez professes undying love for someone in the tabloids, where the storyline will remain the same and the only thing changed will be the leading man.