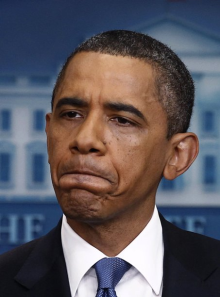 Based on Barack Obama’s comments on the debt discussion breakdown, it’s clear that the President placed blame for the impasse squarely on the shoulders of John Boehner and the Republicans. At his testy post-debt negotiation press conference, “Big Deal” Barack conveniently forgot to mention that the impetus for John Boehner “walking away” from the negotiation table was the President’s insistence on fewer spending cuts and the $400 billion tax revenue surprise he foisted on an already strained process.

Who better than Barack Obama knows that “when it comes to actually doing something difficult folks do sometimes walk away?” In a spoiled, childish fit of anger, Obama has rudely pushed away from a table or two himself, stood up, and without explanation “walked away.”  The President did it with Israeli Prime Minister Bibi Netanyahu, and he did it again recently in the midst of heated debt-limit talks with Eric Cantor (R-VA), one of a few governmental grooms he has accused of “leaving [him] at the altar.”

Throughout most of his press conference, an undignified President pointed his finger at Republicans and blamed everyone but himself for the current stalemate, saying “I’m not interested in finger-pointing and I’m not interested in blame, but I just want the facts to speak for themselves.”

In case Americans haven’t noticed, the nation is presently being led by a reckless individual who excels in political posturing while saying things like, “I think [Americans are] fed up with political posturing and an inability for politicians to take responsible action as opposed to dodging their responsibilities.”

The President’s obvious lack of self-awareness, coupled with his immense capacity for self-delusion, must be the reason he doesn’t recognize that saying the House of Representatives’ “inability…to arrive at any kind of a position” is based on refusal to compromise “any of their ideological preferences,” is actually an accurate description of himself.

As the rancor drags on, it’s hard to find anyone, regardless of political persuasion, who would disagree that the debt crisis is serious.  However, what is even more troubling is having a President who refuses to recognize his own culpability for an already-stressed economy being further burdened by the added weight of healthcare reform, not to mention his stubborn determination to move the nation toward a European-style socialist system.

Typically, whenever the President doesn’t get his way, he shifts into irritated victimhood mode. During the self-exalting, adversarial attempt to pass blame, Obama implied the reason for the impasse hinged on Boehner caring more about partisanship and political posturing than the well-being of the nation, which was a strange accusation coming from a proud “progressive” ideologue like Barack Obama, whose “partisan” wouldn’t recognize a “bi” if it tripped over one.

Wait! In fairness to the President, although his comments did include 93 instances of “I,” he did cite Ronald Reagan twice, which could be considered a form of bipartisanship.  In addition to referring to a conservative icon, Barack Obama also boasted of personal “consistency” which, granted, he does exhibit when it comes to self-praise, perseverance on raising taxes, and spending money the nation doesn’t have.

Nonetheless, during the press conference an angry President peppered his Republicans-never-say-‘yes’-to-anything comments with standard class warfare allusions. Obama intimated that Boehner and Co. favor corporate jet owners and oil and gas companies, and go easy on prosperous individuals “making millions or billions of dollars,” like himself.  Always sensitive to struggling unemployed Americans, Obama took another opportunity to remind the nation that he’s “done extremely well and can afford to do a little bit more,” but curiously still hasn’t.

Obama’s crotchety podium manner abounded with descriptions of seniors “being deprived of meals, Social Security and Medicare.” The President painted images of poor children rushing toward the entrances of emergency rooms for lack of Medicaid, disabled Americans “hanging by a thread,” people “thrown off the health care rolls,” and a future where only the children of corporate jet owners get to go to college

It doesn’t stop there; the press conference doubled as a quasi-stump speech. The President – who has taken no breaks in campaigning since 2007 and has scheduled his combination- 50th birthday celebration/$30,400 a ticket campaign fundraiser for the day after the nation officially runs out of cash – began by accusing the Republicans of not agreeing to his demand to raise taxes as “[a] campaign ploy going into the next election.”

The President even brought up talk radio and blamed the Tea Party for not wanting the debt ceiling raised, and for being at the root of Republicans being “stirred up” and drawing  “sharp ideological lines” that have made the deadlock impossible to break.

Obama said, “I mean, the American people are just desperate for folks who are willing to put aside politics just for a minute and try to get some stuff done.” Does Barack Obama believe that “moving goal posts,” crossed arms, pouts, immature vitriol, edicts to “get here at 11:00 am,” and refusing to go easy on an already-unstable economy and job market are also in the “stuff done” category?

Whenever boxed into a corner the President never fails to use the buzzword “fairness,” which suggests that everyone is unfair other than the benevolent Sheriff of Fairville, Barack Obama – America’s generous dispenser of limitless entitlements.

So adept at manipulation is Obama, that when he said “The hard part is actually dealing with the underlying debt and deficits, and doing it in a way that’s fair. That’s all the American people are looking for — some fairness,” the implication was that America still sees Obama-style “fairness” as the answer to the problem.

Based on his remarks, Obama must want the nation to believe he spends a large part of his day reading mail from fair-minded Americans, who believe “neither party is blameless,” and who want a just President like him to solve the debt/deficit problem without “balanc[ing] the budget on the backs of seniors.”

The President’s comments at his post-debt-negotiation-breakdown press conference imply that he perceives himself to be that “somebody” the nation is “looking for…to look out for them.”

Bordering on deluded, the President, who must assume that “leading” is what he’s doing, challenged Republicans by saying that “at some point, I think if you want to be a leader, then you got to lead.” Happy to rise to Obama’s challenge, Congressional leaders did just that, and did so by choosing to exclude Obama from post-press conference debt negotiation talks. Boehner and McConnell summoned a clueless Pelosi and a “very angry” Reid in an attempt to solve the debt crisis without “Big Deal” Barack who, instead of leading, points fingers, pouts and projects onto others his own pugnacious behavior.