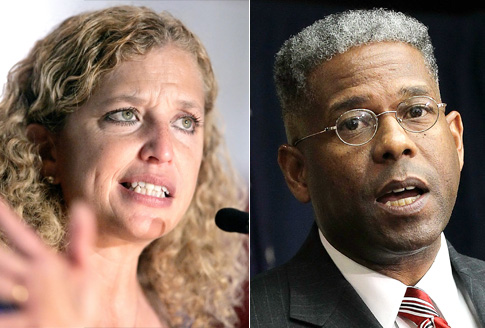 Based on the constant barrage of anti-female allegations directed at Representative Allen West (R-FL) spewing forth from the mouth of Democrat shill Debbie Wasserman Schultz (D-FL), Ms. Schultz has proven she’s no fan of Lieutenant Colonel Allen West.

Wasserman Schultz has already accused the decorated war hero of wearing “extreme disrespect [towards women] as a badge of honor.” West, who opposes funding and providing access to abortion, was referred to by Wasserman Schultz as a “right wing extremist” who thinks that it’s “ok to objectify and denigrate women.”

Since being installed as DNC Chair, Debbie Wasserman Schultz has been officially ordained the rabid pit bull of the Democrat Party who has chosen to sink her fangs into West’s reputation, and for some reason simply refuses to let go.  Recently on the House floor, the Florida Democrat complained about Congressman West’s “stance on Medicare during the debate over a spending cap and balanced budget bill before the House.”

Translation:  Lieutenant Colonel Allen West not only maligns women, he also wants to bankrupt the elderly.

Lieutenant Colonel Allen West, who voluntarily served six tours of duty in Middle East, was not bashful about responding to Ms. Debbie’s low-blow “shot across the bow.” In no way intimidated by Wasserman Schultz’s past objectify-and-denigrate women accusations, West responded with an email that is now being described as an “incendiary…online outburst.”

Look, Debbie, I understand that after I departed the House floor you directed your floor speech comments directly towards me. Let me make myself perfectly clear, you want a personal fight, I am happy to oblige. You are the most vile, unprofessional and despicable member of the US House of Representatives. If you have something to say to me, stop being a coward and say it to my face, otherwise, shut the heck up.

Okay, maybe some of the content in Mr. West’s email could have made the point in a gentler way, but having a rabid dog continually nipping at your heels would tend to make even a dignified person like Allen West a bit testy.

Nevertheless, West sent the email to numerous lawmakers, as well as Wasserman Schultz and other congressional leaders. The subject line of the email: “Unprofessional and Inappropriate Sophomoric Behavior from Wasserman Schultz.”

Having faced down terrorists in the Middle East, Debbie Wasserman Schultz is small potatoes for a war hero like Allen West.  Thus, being the man of conviction he is, West refused to rescind his remarks pointing out the contemptible and baseless criticism Debbie Wasserman Schultz directed towards him in her speech while “alluding to a GOP-backed bill to reduce the debt and amend the Constitution to require a balanced federal budget.”

The Lieutenant Colonel demonstrated his finely-tuned discernment when he also said that Wasserman Schultz has proven “that [she’s] not a Lady” and “shall not be afforded due respect” from him.

Always duty-bound and with the best interest of the nation in mind, West likely felt it was his patriotic duty to alert House leaders to Wasserman Schultz’s “heinous characterless behavior.”  From a true lady who considers Allen West a perfect gentleman:  Bravo sir! A more accurate description of the character and behavior of the DNC Chairwoman couldn’t have been pointed out by a finer man.

After being accused of objectifying and denigrating women for refusing to fund abortions, the tea party-backed freshman must have thought it was time to respond. Using verbiage the DNC Chair would understand, “West told Fox News that Wasserman Schultz’s comments were part of a ‘pattern’ of ‘hate,’ and he felt that she ‘disrespected’ him in her House floor speech.” West said, “It was about enough is enough, and it’s my right to say that. She is the one elevating this.”

True to form, a spokesman for the Queen of Democrat Talking Points responded to the email by saying, “I don’t think that Congressman West is upset at the congresswoman, but rather with the fact that she highlighted that he and other Republicans are once again trying to balance the budget on the backs of seniors, children and the middle class…The truth hurts.”

Defending his email, West hit upon a salient point endemic to liberals in general when he said that Debbie didn’t “need to call [him] out on [her] time to speak on the floor,” and suggested that, instead of implying that he wants to cause harm to old people, perhaps she should “focus on [the Democrat] plan for the debt ceiling.”

In fact, West giving the Dems the benefit of the doubt that they even have a plan to address the debt crisis – other than taxing and spending more – is in itself more than kind. Asking Debbie to “focus on the plan” proves that, unlike Wasserman Schultz, Allen West maintains courtesy and respect despite being repeatedly insulted by her.

Even still, Allen West knows full well that neither the DNC Chair nor President Obama and the Democrat Party have produced a plan to address the debt. West asking for one shows that he is fighting a war to win, and is more than willing to fearlessly toss a verbal challenge back at a flamethrower where, after it detonates, what will be exposed is a Democrat Party long on scurrilous remarks and short on direction and purpose.