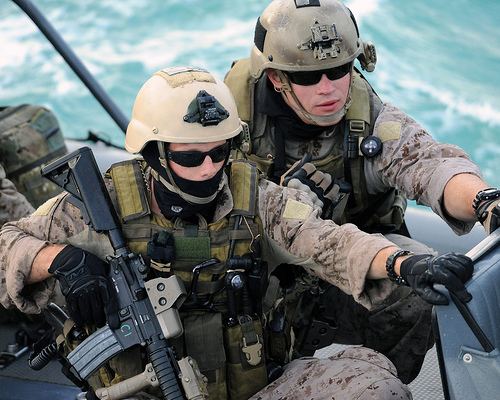 Lest we forget, on May 2, 2011, al-Qaeda leader Osama bin Laden was shot dead, and rightly so. After performing a flawless covert exercise, Navy SEALs Team 6 left the scene, taking with them Osama Bin Laden’s body. The SEALs treated the terrorist’s corpse with respect, giving him a Muslim ceremony and burying his body at sea.

When Barack Obama met the DevGru SEAL operators who made Operation Neptune Spear successful, the President noted that the men “looked less young and fearsome than he expected, and more like guys working at Home Depot.”

To assure that the identities of the unit who led the operations remained confidential, security precautions were put in place and “despite the numerous news reports that named the SEALs, none of the anonymous briefers from the CIA and Pentagon would confirm it.”

Notwithstanding being unable to get any of the facts straight about the raid itself, in an effort to take preventive measures the President and his team, including counter-terrorism Chief John Brennan, attempted to be cautious about revealing which units accomplished the daring feat, referring to special operation Navy SEALs only as “a small team of Americans.”

In the days following the raid, in a coordinated effort to make a weak Obama look like a strong wartime president, members of Congress who were briefed on the operation, in conjunction with a very confused White House press office and other unnamed officials, slowly leaked conflicting tactical details about the raid on bin Laden’s Abbottabad compound.

Then there’s Joe Biden.  Joe either didn’t get the confidentiality memo, or if he did, didn’t bother to read it. Either way, America can always count on Joe to say the wrong thing.

Benjamin Franklin once said: “Remember not only to say the right thing in the right place, but far more difficult still, to leave unsaid the wrong thing at the tempting moment.”

As Barack Obama was doing his Obama killed Osama/take out the “B” replace it with an “S” victory lap, Joe Biden, who used to just provide comic relief, proved himself to be downright hazardous to classified information.  The Vice President must have been so caught up in the thrilling enthusiasm of the “tempting moment” that once again he spoke without engaging his brain.

The night after bin Laden was killed, at a dinner at Washington’s Ritz Carlton Hotel to mark the 50th anniversary of the Atlantic Council, Joe Biden said the following:

Let me briefly acknowledge tonight’s distinguished honorees.  Admiral James Stavridis is a, is the real deal.  He can tell you more about and understands the incredible, the phenomenal, the just almost unbelievable capacity of his Navy SEALs and what they did last Sunday.

Folks, I’d be remiss also if I didn’t say an extra word about the incredible events, extraordinary events of this past Sunday.  As Vice President of the United States, as an American, I was in absolute awe of the capacity and dedication of the entire team, both the intelligence community, the CIA, the SEALs.  It just was extraordinary.

Little did America know that while Barack Obama was practically being showered with confetti in a virtual ticker-tape parade overseen by the left, the soldiers who carried out the operation were unintentionally being offered up as a sacrifice on the altar of Barack Obama’s bid for re-election.

A few weeks later, amongst friends at Marine Corps base Camp Lejeune, Defense Secretary Robert Gates admitted that although the agreement on the way bin Laden was eliminated was to keep all aspects of the operation classified, those close to Obama, including Vice President of the United States, didn’t stick to the agreement.

After the leaks went public, a deeply concerned Secretary of Defense Robert Gates said the following:

Frankly, a week ago Sunday, in the Situation Room, we all agreed that we would not release any operational details from the effort to take out bin Laden. That all fell apart on Monday, the next day.

We are very concerned about the security of our families – of your families and our troops, and also these elite units that are engaged in things like that. And without getting into any details… I would tell you that when I met with the team… they expressed a concern about that, and particularly with respect to their families.

A month later, the man who admitted during his tenure that he wept nightly while writing condolence letters to fallen heroes, retired.

Now, three short months later in Eastern Afghanistan, that which former Secretary of Defense Robert Gates feared would happen did happen when “A military helicopter was shot down in eastern Afghanistan, killing 31 US special operation troops, most of them from the elite Navy SEALs unit that killed al-Qaeda leader Osama bin Laden, along with seven Afghan commandos.”

Although none of the soldiers who perished are believed to have taken part in the bin Laden raid, the fallen are from the same band of brothers. Gone indeed are the “family” members whose safety the SEALs expressed concern over to then-Secretary of Defense Robert Gates.

While the horrific loss may be a coincidental casualty of war, it is also a symbolic message from the brutal Taliban and an act of revenge by terrorists who failed to reciprocate with the same measure of respect afforded the deceased Osama Bin Laden, leaving bodies of dead American soldiers “strewn at the scene.”

Rest assured, Robert Gates is weeping tonight. The former Secretary of Defense maintained that troop safety was his number one priority. However, Gates had no power to save Navy SEAL Team 6 from Taliban terrorist rocket fire launched skyward in the remote hills of Afghanistan.

Contributing to the tragedy is the reality that loose-lipped political operatives with a lackadaisical attitude have to live with the question as to whether top secret information leaked in haste led the Taliban to exclusively concentrate its focus on retaliating against the soldiers who took down Osama bin Laden.

Expert at placing blame, it’s highly unlikely the President will assign himself and his administration the same level of responsibility for being at the helm for “the worst single day loss of life for the US led coalition in Afghanistan since the war began in 2001” as he did the self-congratulatory kudos when bin Laden’s corpse was dumped at sea.

So later this week, right around the time Barack Obama is being feted at his $71,600 per couple fundraiser in New York, somewhere in America flag-draped coffins of heroes lost in a national tragedy will be unloaded from a military cargo plane and returned to fatherless children, grieving widows, inconsolable parents and a sad, but grateful nation.