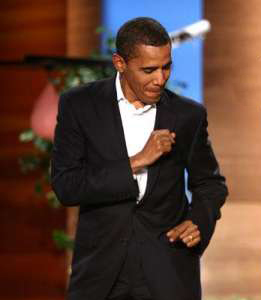 Barack Obama must believe the American people are a bunch of dolts. On one night, the President accepts tens of thousands of dollars from people who have listened to him demonizing them for having the kind of money one needs to earn to attend a $35,800 fundraiser in his honor.

The next night, hours after millions of American lost large portions of their investments in a volatile stock market, as guest of honor at a self-hosted birthday barbeque at the White House, Obama looked around a Rose Garden gathering of 200 well-heeled A-list friends including Hollywood actors and pop stars, and said, “I challenge you to dance.” At the President’s behest the shoes of those with secure jobs and guaranteed pensions immediately “came off, and things kicked into high gear with barefoot jammin.”

According to one guest, “the night was balmy, and when dinner was done, a DJ spun dance tunes—‘like at a Bar Mitzvah,’” an analogy even Bibi Netanyahu might agree was an odd description for Barack Hussein Obama’s birthday party. Nevertheless, “the twenty tables for ten in the Rose Garden were pushed aside so guests could dance, led by the President and Mrs. Obama.”

While most Americans, reeling from the day’s economic events, were doing anything but dancing, Barack Obama was doing the “Electric Slide” with comedian Chris Rock at what was described as a “fabulous” but “casual” five-hour barbecue honoring the President’s 50th birthday.

Chris was so impressed he enthusiastically tweeted out: “Just left the Presidents birthday party at the White House. Herbie Hancock played, Stevie Wonder sang and yes they did the electric slide. A great night.”

Poor Herbie must have been tuckered out after performing for the President’s fundraiser/birthday bash in Chicago the night before. The musician had to hit the road to the White House in time to provide music for the President and the First Lady who reportedly, in bicep-baring summer attire, wore out the grass with Dancing with the Stars alumni and Dallas Cowboys Hall-of-Famer Emmitt Smith.

Taking the evening off from talking up the economy and slamming Allen West (R-FL) was Democratic National Committee chairwoman Debbie Wasserman Schultz, who was joined at the event by another person in dire need of an updated hairdo, Al Sharpton.

The only ones absent were the famous rat that often shows up when Obama speaks in the Rose Garden, border security advisor and presidential “brainstorming” partner Eva Longoria, and Republicans who, after the debt ceiling brouhaha, were nowhere to be found on the guest list.

Stevie Wonder performed a “surprise” rendition of Barack and Michelle’s wedding song, “You and I,” a sentimental addition that gave the birthday barbeque the “Ahhhh…how sweet” romance that Chicago-style hot dogs slathered in neon relish often lack.

Besides steamed frankfurters on sesame seed buns, also on the menu were grilled meats, pasta and salad made with “fresh greens plucked from Mrs. Obama’s Kitchen Garden, as well as vegetable sides, accompanied by American wines,” and of course, birthday cake and a diverse array of pies.

In honor of what Michelle claims is Barack’s well-earned hair color as well as reflections of the general mood of the country, the tables were “covered with simple gray cloths.” The tablecloths were “anchored by sprays of yellow flowers,” reflecting Obama’s gratitude toward the journalistic style of the mainstream media, with added greenery in memoriam to obsolete American currency.

It should be noted that to show solidarity with struggling Americans, the Obamas paid for the food, decorations and party favors out of the President’s very own guaranteed $400,000 a year salary.  The Obamas’ selfless action in financing his out-of-pocket birthday party proves to America that even though the Big-Five-Oh President does the Electric Slide all over the American economy he’s still willing to go the extra mile and share his wealth while grilling the Wagyu beef.

A great time was had by all, and despite the condition of a nation in decline, it’s highly likely the Democrats in attendance wished Mr. Obama, shoving off with the First Family to spend a relaxing weekend at Camp David, another four successful years of wreaking holy havoc, in one form or another, on the United States of America.