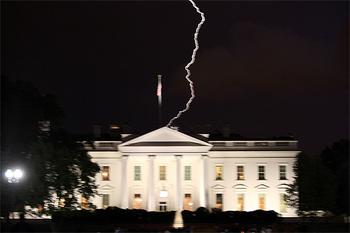 With the way things are going for Obama he should stock up on good luck charms. Adding to the President’s economic, social and political struggles are natural phenomena that appear to trail and then come up to batter Obama on all sides.

Earlier this year, a lightning strike just missed the White House and then one did make direct contact at the president’s favorite local golf course at Andrews Air Force Base. Fortunately, the Golfer-in-Chief and his 9-iron were not on the course.

There have been flies in the East Room landing on the President’s lip and a rat in the Rose Garden stealing the show at a press conference. Now, as the Obama family prepares to head back to Blue Heron Farm, a lavish $20 million, 28.5-acre compound in Chilmark, on Martha’s Vineyard, a wall backing the farmhouse porch caught fire and required emergency attention from local firefighters.

This is the third year the Obamas will stay at Blue Heron manor.  The lush property has a pool, apple orchard, basketball court and private beach. Last year the Obamas rented the home for $50,000 a week, up from the prior year’s $35,000 a week.

It’s odd that the President and his family would choose Chilmark, named the most expensive small town in all of America by Business Week back in 2007.  You’d think the last group of people Obama would want to spend time with are private jet owners, snooty yachtsmen and privileged Vineyard dwellers who look for ways to avoid sharing their good fortune with others.

The secluded property is privately owned by a couple who purchased it after the previous owners died in a plane crash.  Dead former owners of property on an island famous for Chappaquiddick are creepy omens and may explain why, after paying $100,000 for two weeks worth of lodging, it seems that each year there is some sort of furlough-wrecking issue that puts a damper on the president’s vacation.

As a result of the Nor’easter blowing around various and sundry material, “portions of Tisbury Great Pond, the salt-water lagoon fronting the first family’s vacation estate Blue Heron Farm,” was closed “due to high levels of enterococci, an indicator that the water is contaminated with fecal coliform bacteria.”

Last year the obstacles to holiday fun were moisture, dampness and putridity – this year fire threatened to be the spoiler.

With the Obama family’s scheduled arrival weeks away, a wall in the main house near the porch went up in flames.  Chilmark fire Chief David Norton said the automatic fire alarm in the farmhouse alerted two first responders who live nearby.  The dedicated firefighters quickly responded and rushed to the scene. According to Norton, the cause of the fire was not spontaneous combustion, but a faulty gas grill.

For the Obamas, not being able to take a dip in the pond is one thing, but a broken grill could be even more problematic, especially for the President winding down after the much anticipated “Let’s Pretend We’re Listening” taxpayer-funded battleground state bus tour. Anxious to be amongst the people, while on the road America’s self-sacrificial President will be subjected to the smell of diesel fuel and diner food, which could inspire him to put on his barbeque chef hat, hunker down, and rustle up some home cooking.

If he’s planning to grill up homemade chilidogs or trying to replicate a vacation rendition of Michelle’s favorite Shake Shack Burger, the last thing the President needs is to squander quality family time fanning charcoal soaked with Kingsford® lighter fluid.

What could complicate matters for the Obama family is if another Nor’easter should happen to blow through the Vineyard and the gas grill on the porch should happen to act up again, because then they’d be hesitant to dive into the sewage infested lagoon to escape the conflagration.

It remains to be seen whether Barack Obama, who has managed to apportion his time to fit in high-end fundraising and Ramadan dinners, will “cut his vacation short to deal with fiscal and economic issues.”

Maybe instead, the President will decide to  grab a rabbit’s foot, head to Martha’s Vineyard, and seize the opportunity to finally “heal the planet” by slowing the “rising ocean” and addressing the pressing elemental issues at hand – fire, driving rain, and free floating fecal coliform bacteria.