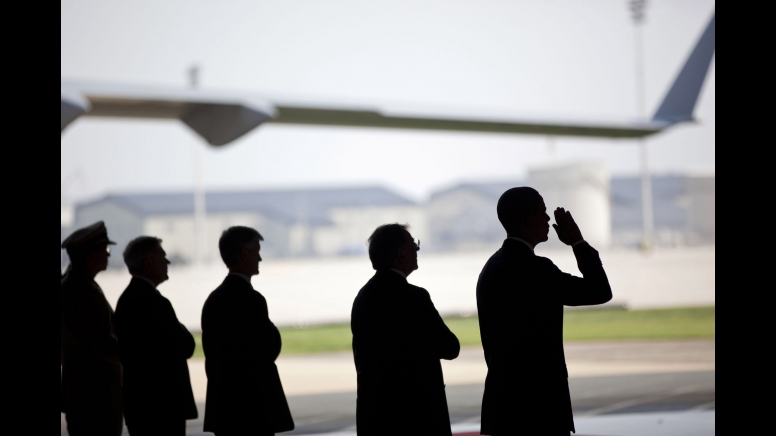 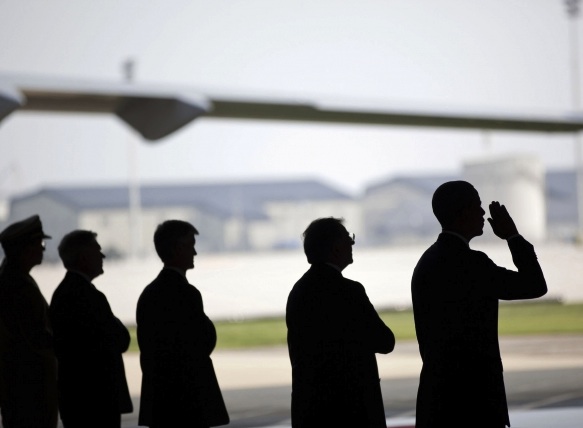 If the American people were doubtful about the manipulative nature of Barack Obama, his undignified behavior at the “dignified transfer” of the remains of 30 American troops killed by Taliban insurgents in the worst single loss of life in 10 years of the Afghan war should extinguish any remaining doubt.  It’s confirmed — Barack Obama is willing to disrespect the families of dead war heroes if doing so assists in his desperate bid for reelection.

After the tragedy in the “forested peaks” of Wardak Province, 60 miles southwest of Kabul, Pentagon officials had said that because 19 families of the deceased 30 soldiers objected to media coverage of the remains coming off a plane at Dover Air Force Base, no images would be taken. The Pentagon was so emphatic about the sensitive nature of the event, they even “rejected media requests to take photos that showed officials at the ceremony but did not depict caskets.”

Doug Wilson, head of public affairs at the Pentagon, said that not even the photographers who generally accompany the Defense Secretary and the Chairman of the Joint Chiefs of Staff were permitted to attend.  The Pentagon was committed to fully respecting the wishes of the fallen soldiers’ families; they deferred to the bereaved and refrained from chronicling the event with official photos of the solemn occasion.

Ordinarily, if 11 out of 30 families didn’t mind having the flag-draped caskets photographed, they could be, after which they’d be “ushered away” before the remains of any troops whose families were too devastated to want to be a public spectacle were unloaded from the plane.

The difference in this case was that when the nearly three dozen soldiers, 21 of whom were DevGru SEAL members, arrived from overseas, prior to being formally identified by Air Force Mortuary Affairs Operations, “any given case could contain the remains of troops whose families did not want coverage.”  So taking pictures was strictly prohibited.

What the Pentagon didn’t anticipate was the President’s falling poll numbers putting him in dire need of a good saluting-dead-soldiers photo op.

Unbeknownst to those caught up in that heartrending moment, a White House photographer accompanied the President to the ceremony — incognito. By that night, “an official White House photo of a saluting Obama was distributed to news media and published widely. It also was posted on the White House website as the ‘Photo of the Day.”

Don Wilson said he “did not know the White House photographer was present and had no idea a photo of the event was being released until it became public.”

The snapshot portrayed “Obama and other officials in silhouette and did not depict [the] caskets.” In an attempt to give Barack Obama the stature he lacks as a leader, the photo was shot against a gray sky, under the wing of an aircraft, outlining a saluting President from behind, standing ramrod straight, two heads above four other men whose hands were over their hearts.

The issue here is not whether Obama was saluting or not; it’s that the President’s unrelenting quest for attention was the sole reason that the crushed parents, brokenhearted wives, and confused children whose loved ones’ bodies were rolled off a cargo plane into a concrete hanger were denied the simple request for a private moment of grief.

After the Navy SEALS successfully carried out Operation Neptune Spear and sent Osama bin Laden on a one-way journey to 72 Virginsville, the soldiers were uneasy about confidentiality and the details that were slowly leaked.  The concern was how exposing the identities of the covert team could potentially impact the safety of the SEALs’ families.

Now, upon the deaths of 21 of those Seal Team Six members, the President’s narcissistic self-absorption has usurped honoring the express wishes of men lying silent within metal tombs who asked nothing from the country they died defending except that above all, family comes first.

Ironically, in March 2009, the Obama administration chose to reverse an 18-year-old moratorium, renewed by George W. Bush, that banned photographing the caskets of US soldiers returning home from war.   The newly-enacted Pentagon policy specified that, upon notification of a loved one’s death, the “primary next of kin” has the right to make the “family decision regarding media access to dignified transfers at Dover.”

By toting along a photojournalist to an event that banned photographs, Barack Obama, the man who approved the “primary next of kin” policy, decided once again to exempt himself from a rule he made for others. The President chose to disregard the wishes of 19 military families and violated a stipulation that was included with his authorization.

When asked about the picture, White House Press Secretary Jay Carney said that it was “carefully taken so that it did not show the cases containing remains.” Which really means: We knew the families were against media coverage but the President made an executive decision to secretly attempt a tactful photo op.

Carney should have stopped there, but he kept on explaining – “In this case, the White House released the photo, in the interests of transparency, so that the American people could have as much insight as possible into this historic and sobering event.” The President is so wary that he didn’t even invite the press to his transparency award ceremony. The most opaque, non-transparent presidency in the history of the nation decided to be transparent on the one occasion when total discretion was of the essence.

If President Barack Obama wants to be transparent, maybe instead of invading the homecoming of dead war heroes with a hidden camera he could start with a more benign effort like releasing his college transcripts and following his own rules.