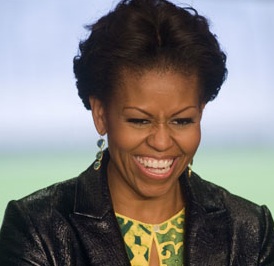 Lucianne.com “Must Reads of the Day”

Michelle Obama must think most people are easily duped. To quell the disapproval of Americans who struggle to come up with the extra money to fill their gas tanks, Michelle has to spend lots of time – between booking vacations and deciding how big a wardrobe chest to load into the cargo plane – coming up with justifications to subdue the public’s disapproval of her obvious addiction to pricey vacations.

Last year, prior to heading off to Martha’s Vineyard, Michelle took Sasha on an exotic summer visit to Spain.  The I-dare-you-to-say-something excuse for that excursion was that it was a “private mother-daughter trip with longtime family friends,” which in itself is a contradiction in terms.

A “private mother-daughter” trip with 40 “close” friends and a taxpayer-funded security detail of 68 is hardly an intimate family outing.  The entourage was so large that the group required 30 rooms in “Spain’s most exclusive hotel the Villa Padierna, a golf and spa resort located along the coast from Marbella.”

Sorry, but throwing around mother-daughter language, as if Sasha and Shelley were going to Spain to spend one-on-one “Mommy and Me” time, was nothing more than a manipulative shield used to suppress well-deserved criticism for a four-day trip rumored to cost $375,000.

Every Christmas the Obamas kick back for a low-key holiday in Hawaii on a “family” break that runs about $1.5 million for transport planes; exorbitant rent on a mansion called the “Winter White House;” and lodging for security, staff, and medical backup.  Before anyone dares criticize, it’s important to remember that the break is a longtime family tradition where two darling little girls get to make an annual visit to walk the hallowed ground that is their father’s alleged birthplace.

Every couple of months Michelle has to pray that America is either consumed by the economic pain inflicted by her husband or afflicted with short-term memory loss, because between tag-along official trips barely a couple of months pass before the first lady partakes of on-site international cuisine and global sightseeing, compliments of the nation’s taxpayers.

If White House sources are correct, Michelle is doing one of the following:  either floating another lame excuse to bunk in some exclusive $2,500 a night hotel somewhere, exploiting lunch with her daughters as an excuse to shop in Paris, or treating her liberal body to an expensive massage accompanied by a martini made with “top-shelf vodka.”

Take for instance how, after Obama encouraged America to save money by skipping vacation, less than 50 days after returning home from Oahu Michelle commissioned AF1 to ferry her as chaperone to a 2010 giggling-girls ski trip in Vail, Colorado

Besides not heeding her husband’s austerity advice, the first lady of healthy eating dined on ancho-chili short ribs at “141 grams of fat per serving.” Then, after dessert, chose to camp out like a girl scout in the “upscale Sebastian Hotel on Vail Mountain, where rooms start at $650 a night and range up to more than $2,400 for multi-bedroom suites.”

Lest we forget, Michelle and her daughters spent time tasting and touring their way through New York City, sightseeing in Los Angeles, barbequing and memorializing on Memorial Day in Chicago, hiking in Maine, bobbing for tar balls on the Florida Gulf Coast, and recovering from a whirlwind of activity on an annual vacation in Chilmark.

Ever family-minded Michelle also accompanied her husband to Indonesia, South America, Ireland, the UK and Paris, trips that incorporated retail therapy, seeing the sights, fine dining, and recreating in between official duties that included breaking English protocol and forcing conservative Muslim men to shake her hand.

This year, just prior to heading to Martha’s Vineyard, Mrs. Obama managed to squeeze in a pre-vacation/ official business/vacation to South Africa, accompanied as usual by an entourage of tag-along family and friends. If cost estimates for travel and security are correct, the jaunt cost American taxpayers anywhere from $500,000 to a reported $800,000.

Before Americans jump to conclusions and protest unfairly, “U.S. Embassy Spokeswoman Elizabeth Trudeau made clear that the trip was partially a personal pilgrimage for the first lady” – another sentimental crusade with a huge price tag partially financed with tax dollars deducted from the unemployment checks of 3.5 million people, a fraction of the 13.9 million unemployed individuals presently collecting benefits.

Thus, justification for spending a half a million dollars obviously demanded playing the trusty old “family card,” which may be why Mrs. Obama brought along Sasha and Malia, Grandma Robinson, and her brother’s two kids. Prior to the trip, and in hopes of evoking the “awww” factor, a spokeswoman for the U.S. embassy in South Africa said “A visit to South Africa is important for them as a family.”

The African “excursion included tourist stops to historical landmarks and museums” and a “chance for Mrs. Obama to meet privately with Nelson Mandela – an experience she described as ‘surreal’” – an opinion one can only hope had nothing to do with Mr. Mandela’s shirt.

Nevertheless, the rationalization for spending an exorbitant amount of money on a private family safari included the standard Obama-family-Hallmark-moment excuse, as well as Michelle addressing “youth leadership, education,” and sharing with Africa her views on “health and wellness” between scarfing down French fries, huge sausages, and fried fat cakes in Muchudu village in Botswana.

So, after three years and the reported millions in taxpayer dollars spent this year alone on Michelle Obama’s vacation expenses, family time, “private” family vacations, and the “long-planned family trip” excuses are starting to get old.

Especially for Americans whose chances of ever taking a family vacation again are almost as likely as Mrs. Obama wearing a designer outfit twice, staying at a Motel 6™, or going 60 days without taking off on a costly excursion financed with other people’s money, justified with the excuse that visiting Costa del Sol is “quality time” with the kids.