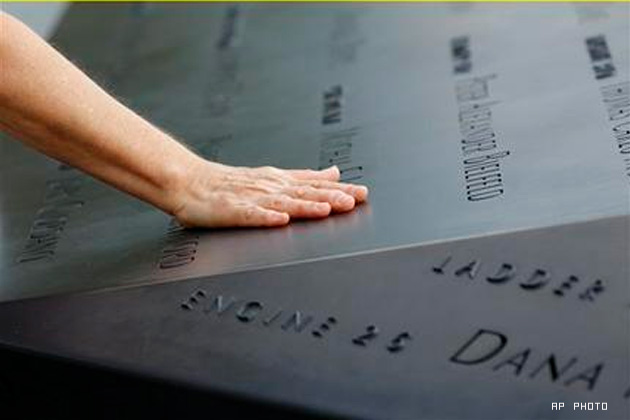 Ten years after thousands of our brothers and sisters were incinerated, crushed and obliterated for the sin of being American, it seems that memorials are just another reminder of how tragic it is for a nation at war to be more concerned with symbolism than it is with substance.

After the 10th anniversary of the September 11th attacks, instead of acting like a nation of widows refusing to release the casket, it’s time to ask the question: What purpose does unending grief serve if we’re not totally committed to preventing another, even more devastating event?

Year after year, it seems as if the country is more focused on running its national finger over the names of the dead “etched on bronze parapets that ring the memorial pool” and listening to bagpipes play “Amazing Grace” than risking insulting imams and radical Islamists living in our midst.

The 9-11 anniversary brought with it distant echoes of bagpipes playing funeral dirges, memories of faces on posters tacked to telephone poles, and brutal images seared forever into America’s collective mind. Yet within the guttural wail of a nation in mourning, what was missing is the indignant anger needed to ensure that what took place that fateful day never happens again.

What compounds the situation is that we presently live in a culture so saturated with political correctness that many fail to notice that those who murdered our brethren now occupy seats of honor at their funerals.

Lest America forget, first responders are the ones who saved the lives of strangers at the cost of their own. If given one more chance to speak, the dead would probably say they would prefer that the nation they loved and died for was so securely sheltered from harm that there would never again be a need for “sirens [to] go off around New York City to mark a national moment of silence.”

Brave men like the late Lieutenant Vernon Richard of Ladder Company 7 would almost certainly be perplexed over a memorial service given in his honor being attended by a President who makes speeches about the tragedy of that fateful day, but refuses to seriously address the problem of radical Islam in a world in which the lieutenant’s son still lives.

Then there’s Jeanmarie Wallendorf, a young woman with her whole life ahead of her. How would Jeanmarie feel about having her name read at a memorial while over at the Pentagon, Joe Biden misrepresented all the soldiers who died in the war on terror by calling them “fallen angels?”

Biden would do more justice to the memory of the dead if he stopped waxing poetic and instead counseled the President to start concentrating on how to prevent those who have traveled down what Obama calls the “narrow path…between humiliation and untrammeled fury” from flying another aircraft into a skyscraper.

If given the chance to speak, Daniel Martin Callabero would likely also tell the President that rather than spend precious time trying to find ways to placate followers of Islam, he should honor those Muslims who died on 9-11.  He’d tell him to do whatever is humanly possible to protect innocent Americans from “al Qaeda recruiters smuggling biological weapons into the United States” across the border of Mexico.

With that in mind, it’s likely that those who fell or jumped from the highest floors of the World Trade Center would probably prefer being eulogized by a President who at least pretends to be more serious about closing the border than about suing Arizona, a state desperately trying to defend itself against invasion.

Placing a wreath at the Flight 93 National Memorial means nothing to those who perished if things are so lax that radical Islamic cleric Anwar Al-Awlaki, with his connections to the 9-11 plot and the Ft. Hood shooting, could be invited to a luncheon by the Pentagon and dine compliments of those that Flight 77 targeted and destroyed.

Moreover, despite Barack Obama quoting Scripture: “Weeping may endure for a night, but joy cometh in the morning,” he is still the same president who recklessly “impose[d] $400 billion in military cuts.” Sorry, but reading from Psalm 30:5 does not compensate for decisions made that could result in the type of nighttime weeping and terror that Paul Simon singing a 9-11 rendition of  “The Sound of Silence” would do nothing to avert.

Granted, “waterfall-bordered chasms outlining the footprints of the World Trade Center towers” that spill sheets of water into calm reflecting pools, the annual recitations of 2,983 victims’ names, and meeting the children of those who perished do evoke intense emotions on every anniversary.

However, for forthcoming 9-11 anniversaries, it’s probably high time America eased up on the symbolism and instead chose to emulate the substantive actions of Jeremy Glick and Todd “Let’s Roll” Beamer who, along with fellow passengers on United flight 93, sacrificed everything to defeat four terrorists headed straight for our nation’s capitol. Because in the end, if America refuses to change how we address the still-growing threat of radical Islamic terrorism, then all our touching rituals really do is disrespect the dying wishes of those we seek to memorialize.