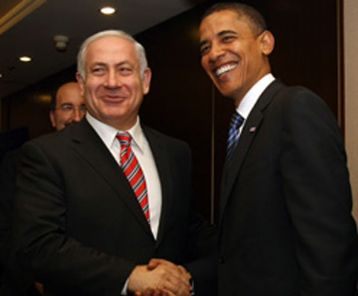 During Bibi Netanyahu’s 2010 visit to the White House, in the middle of a tense settlement concession conversation an irritated Obama left Mr. Netanyahu sitting in a room to rush upstairs for din-din with Shelley and the girls. Abruptly walking out of the room, the President said “Let me know if there is anything new.”  Either the Israeli Prime Minister was being officially dissed, or Michelle refuses to tolerate any excuse for Barack showing up late for dinner

However, in the future, should the Prime Minister desire another sit-down with the President of the United States, he’ll have the option of purchasing a roll of tickets for the “Sometime soon, can we meet for dinner/Reelect Barack Obama” raffle.

Before the “Sometime Soon, Can We Meet For Dinner?” initiative, Netanyahu didn’t stand a chance in hell of getting Barack to sit through an entire conversation.  Now, at least Bibi has as much opportunity as anyone else willing to contribute five bucks.

Now, if by chance Bibi’s ticket is pulled out of the spinning drum, Obama, albeit under duress, will be obliged to endure eating blintzes and can no longer escape a Jerusalem settlement discussion using dinner getting cold as an excuse.

The President of the United States selling dinner raffle tickets may indicate that the man is forlorn and in need of genuine companionship. Begging to be shown love by the people who just three years ago were showering him with confetti and weeping at the mere mention of his name, frankly, is both “creepy” and pathetic.

Barack Obama’s dine-with-me/love-me idea started when the 2012 reelection campaign sent out an email with this subject line: “Sometime soon, can we meet for dinner?” Why would an American president ask such an unusual question? Obviously, to goad supporters into donating money in hopes of winning face time with Mr. Lonely.

The email also says, “So whenever I can, I want to take the opportunity to meet you.” Wouldn’t a message like that coming from anyone besides the President alert Americans trained to be careful online that it may be time to call in the authorities?

Nevertheless, Obama’s endearing words reminded voters that he and they are more than just political allies.  The President said “Supporters like you are reason I’m here, and that the values we share have always made our organization more than just a political campaign.”

Honestly, the President’s fundraising/supper-with-a-supporter email was more like an awkward love letter than a powerful politician’s solicitation for money.

That aside, winning benefactors will have a once-in-a-lifetime chance to experience what Bibi Netanyahu was denied, which is to enjoy dinner and a chat with Barack Obama and be thanked “in person,” something a former Democrat president, who shall remain nameless, provided for free.

In addition, the email updated constituents on Obama’s summer meeting with volunteers from around the nation, which could be liberal code for ACORN workers and Black Panther poll watchers.  The online correspondence also expressed the President’s heartfelt desire “to talk one on one with the people…taking ownership of [the] campaign and [to] connect with the work going on every day in neighborhoods across the country.”

Try as he might to disguise it, Barack sounded as if the real reason for the odd fundraising style, besides being starved for the cheering displays of adoration that he’s become accustomed to, might be that the President is unable to pry himself away from his love of community organizing.

If Barry really wants to inspire community involvement, for an extra $2 the President could suggest a secondary raffle for a chance to win his very own well-worn, personally autographed copy of Saul Alinsky’s “Rules for Radicals.”

Moreover, and not to be overly critical, but based on some of the high class dinners Barry has treated friends to in the past, like the time he took Dmitry Medvedev to Ray’s Hell Burger, the $5 may not go directly into the campaign coffers – but could be used to cover the cost of the date.

Let’s remember, the President has tried the raffle thing before, but from the looks of the polls, even enjoying a Ray’s B.I.G. Poppa with Big Poppa doesn’t seem to be turning things around. Even still, Obama said he wants to “keep doing these dinners throughout the campaign.” With the economy in the tank and the line at the unemployment office getting longer every day, and with more and more fast food restaurants taking food stamps, should the President of the United States really be spending time supping with sycophants like the Obama Girl?

In the end, history has proven that dining with the Prime Minister of Israel holds little sway in Obama’s world.  Instead, it’s things like raffle dinners that sets Obama’s campaign apart, because he believes “dinners like these are how [he] will continue to put people at the heart of [his] campaign — and prove that [he doesn’t] need checks from Washington lobbyists or special-interest PAC money to win an election.”

However, what Obama does “need” are $5 donations squeezed out of inexplicably loyal supporters who otherwise don’t have two nickels to rub together.

Couple the dine-with-me email with Obama imploring cheering crowds in North Carolina to prove their love for him by passing his jobs bill, and the whole sorry state of affairs gets even more peculiar.  Crying out for dinner dates and hollering “If you love me, you got [sic] to help me pass this bill,” is either pure desperation, unbridled narcissism, or both, sending the situation from the realm of the strange into the annals of the absurd

However, there’s always a bright side. The next time Bibi Netanyahu is in a room with Obama and the conversation morphs into a “hazing in stages,” the Prime Minister knows he can distract Barry from stomping off to dinner by changing the subject and proposing an idea for yet another raffle, where for just 50 cents unlimited winners get to give America’s love-deprived President a big smooch.