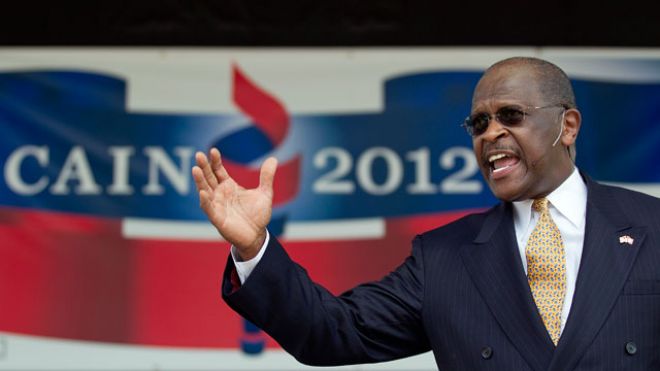 Herman Cain winning the Florida straw poll is encouraging.  It means an honest, straight-talking non-politician can cut through the flowery rhetoric and be taken seriously.  While all eyes are on Rick and Romney, Herman is busy transforming “grass-roots popularity into strong showings in national polls.”

In the end, it’s more than a long shot that the ‘Hermanator,’ a Baptist minister who enjoys singing the occasional Gospel hymn and whose favorite dish is the “Godfather’s combo with extra cheese, sausage, ham, onions and peppers, [washed down] with an icy Coke,” would actually have a chance to win the Republican nomination.

Still, if one were to fantasize about such a scenario, many pleasant ideas come to mind which, if they were to materialize, could inject some humor into a nation that Mr. Cain says needs to “lighten up” and have a few laughs.

Right out of the gate, the first thing that would be striking about a Herman Cain vs. Barack Obama presidential race would be the comparison between Barry dragging out and setting up two Teleprompters to answer a few questions and Herman standing next to him, hands in his pockets, pithy retort at the ready.

After watching Bobble Head Barack turn from right to left reading what someone tells him he believes off a scrolling Teleprompter, oh, to be able to watch Herman Cain lean over a debate podium and hear him say, “We need a leader, not a reader.”

A “Yes We Cain” versus a “We thought we could, but then we didn’t” run-off for the White House between the man from Georgia and the man from God-knows-where would certainly create mass liberal confusion, because instantaneously the race card would have to be moved to the bottom of the deck.

Oh, but wait! Obama had better not remove the race card too fast. Herman identifies with racists in a way, because as a black man he knows the racism issue isn’t about skin color.  On the left, racism is defined as: “People who oppose Obama,” and in the past Mr. Cain has in fact admitted, “I guess I’m a racist.”

The confusion surrounding having two black candidates for president would make for interesting theatre.  Take for instance Black Panther poll watchers standing guard for racial equality.  How would they know whom to wave their clubs at on Election Day?  Do the Panthers intimidate whites voting for Obama or blacks voting for Cain? How would they figure out who is voting for who?  What a quandary.

Prior to winning the Florida CPAC straw poll, Mr. Cain articulated his intent to replace the tax code with a 999-tax plan where, across the board, he would implement “9 percent tax on businesses, personal income and sales.” If, in the aforementioned fantasy, Herman and Barry get to debate taxes, when it’s the President’s turn to articulate his views on taxes Herman could hold a “999” poster board upside down in front of the camera and America will instantly know where and from whom Barack’s tax philosophy gathers its inspiration.

A perfect retort to Obama touting, blaming and refusing to accept responsibility for failed policies would be for Cain to pose a question to America: “How’s this guy workin’ out for you?”

Who can forget the first lady opining on Obama’s ‘share the wealth’ view of the world, saying, “The truth is, in order to get things like universal health care and a revamped education system, then someone is going to have to give up a piece of their pie so that someone else can have more.”

Oh, what sweet irony it would be to watch Obama grapple with Godfather’s Pizza’s successful CEO who saw pie as a symbol of success, not an emblem of imposed sacrificial socialism. A person who, since leaving what he calls “that Democrat plantation” a long time ago, found out that if an individual refuses to adopt the usual liberal victim status, miraculously there’s more than enough for everyone to have a whole pie – if a person is willing to work for it.

Sweeter still would be to hear how cancer survivor Herman Cain would respond to Barack laying on the Obamacare user-friendly insurance language, heartstring-manipulation banter about 32 million+ uninsured, talk of $980 billion in 10-year costs, mandates, and everything else included in Obama’s gargantuan government power grab.

At a recent Republican debate, the potential presidential nominee succinctly boiled down all the healthcare drivel to one concise and grateful sentence when he said: “If Obamacare had been fully implemented when I caught cancer, I’d be dead.”

Mr. Cain has repeatedly proven that when truth is in the mix there is no need for theatrics, or Hermanator hysterics. Cain’s legendary “I’d be dead” comment not only applies to himself as a cancer survivor, but regrettably also predicts America’s future if Barack Obama manages to somehow slickly speechify himself into a second term.

Herman Cain may not be the perfect candidate but, then again, who is? Moreover, Mr. Cain getting the Republican nomination, unfortunately, is doubtful.

However, reality does not diminish the fact that this patriotic man is the master of a unique style of political “Hermaneutics.” In few words, Herman Cain clearly articulates the extent of death, doom and destruction a second term would impose on a nation already reeling from three years of Barack Obama’s perverted brand of “Hope and Change.”