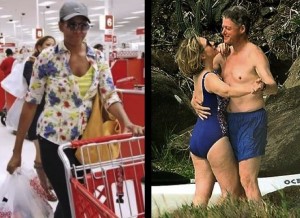 One would think that clever people would know how to finesse a shady sleight of hand whenever a political blunder demands a dishonest image be projected for the American public. Yet, time and again Democrats considered exceptional by other Democrats appear to be more gifted in looking foolish than exhibiting the ingenious brainpower they believe sets them apart from the rest of the world.

Take for instance way back in the glorious Clinton years, when Hill and Bill were supposedly having a private moment slow-dancing on the beach in St. Thomas.  Coincidentally, the loving interlude took place while Bill was simultaneously preparing for his deposition in the Paula Jones scandal.

In her memoir Living History, the always authentically disingenuous Hillary described the private, honeymoon-like moment and the romantic couple’s surprise when they found out a voyeuristic paparazzo had intruded on their lovers’ passion from afar.

After finding out about being scoped out by a high-powered telephoto lens, Mrs. Clinton revealed that “Bill wasn’t upset. He liked the photo.”

Bill Clinton has proven to be a big believer in phony beach photo ops. Who can forget D-Day in 1994 and Bill waxing sentimental on the sandy shore of Normandy?  It was there that lower-lip-biting solitary Slick Willy created a cross out of a pile of pebbles created out of thin air. Similar to how menopausal Hillary and a paunchy Bill in wrinkled swim trunks also showed up out of nowhere in photos slow-dancing next to an upside-down kayak.

The Clinton swimsuit scam is a perfect example of supposedly smart people behaving in a manner so out of character that it’s obvious their action is a calculated attempt to influence public opinion.

Who can forget Bill Clinton, the cigar-smoking king of dalliances, in a marital embrace with the only female he had no romantic interest in – political careerist Hillary Clinton, supposedly “the smartest woman in the world,” who allowed herself to be photographed in a bathing suit from behind – and they expected the American public to believe this was genuine?

How stupid do these two think we are? Oh, that’s right – liberals are deluded into believing everyone besides themselves are nothing more than gullible dumbbells with deficient IQ’s.

In reality, the Clinton marriage is comprised of two ambitious people living separate lives yet remaining married purely for political expediency.  Any public exhibit of conjugal oneness on the part of the Clintons is cunning manipulation by two con artists who mistakenly believe they’re smarter than everyone else; in their arrogance, each one clearly lacks the awareness to understand that those they sought to swindle were already onto their ruse.

Phonies like the devious Arkansan duo from Chappaqua aside, it didn’t seem possible that carpet-bagging Yankee fans with Jewish family roots and an office in Harlem could be upstaged in the chicanery department. But the Clintons have finally been shown up by the “Harvard Law grad, clearly brilliant” Michelle Obama and Barack Obama, the guy with the “intellectual stammer [that] signals [his] brain … is moving so fast that [his] mouth can’t keep up.”

Years after Bill Clinton set out across America redeeming his reputation as a humanitarian interested in the well-being of both sexes, a historic whiz kid named Barack Obama has been about the business of one-upping both the Secretary and the Slickster by using newfangled but similarly fake scenarios in an attempt to influence public opinion.

For instance, whenever his Christianity is question, Barack Obama, the man who prefers to worship at the First Church of Hardwood, shelves the basketball and takes a saunter over to St. John’s Church, family in tow, dressed in Sunday go-to-meeting finery under the watchful eye of photographers documenting the devout attitude of America’s non-Muslim president.

On more than one occasion, to redeem his sullied reputation or champion an unpopular cause, Obama has done things that rival even the most romantic beach dancing. After the BP oil spill and after scarfing down a lemon-lime snow cone, a distraught Barack sunk to his knees to collect tar balls on the Gulf of Mexico.  He made a pre-planned, staged “surprise” visit to see the all the troops in Iraq (all except the ones who didn’t vote for him) and even provided hospital lab coats to an army of supporters who suddenly showed up in the Rose Garden to applaud the passing of the healthcare reform bill.

Even still, while Barry and Bill are both proficient at treating Americans like dolts, when it comes to phony change-the-subject photo ops, Michelle ‘Dupery’ Obama puts Hillary ‘Duplicity’ Clinton to shame in the phony-reality department.

When Barack was running for President of the United States, Michelle was shrewd enough to show up on talk shows in J. Crew sweaters and affordable dresses.  The goal at the time was to send a message to America, in much the same way Hill and Bill pretend to actually like each other, that the Obamas are middle-class, shabby-chic shopping folk.

Michelle Obama is either a woman who thinks Americans are slow on the uptake, or couldn’t care less what any of us think.

Recently recruited to assist the re-election efforts of a president whose poll numbers are falling faster than his wife changes outfits, it seemed time to call out the cameras, change from couture into khakis, and send Mrs. Obama on a shopping trip that screams “I push around red shopping carts and pre-scan items to keep on a budget too.”

Resurrecting the subject of shopping in an attempt to make the President’s wife appear to identify with those who’ve compared the lines at Target with those at Wal-Mart, über brilliant liberal advisors dispatched the same woman who recently wore $40K in diamond-encrusted wristlets to a fundraising event, to bargain-shop for Lysol and dog food.

Although accompanied by photographers and a cavalcade of Secret Service, Democrats can only hope that while at Target the incognito Mrs. Obama thought ahead and purchased a one-piece bathing suit for herself and boxer-style swim trunks for Barack.

If the downward trend of the President’s popularity continues, Barry and Michelle have a unique opportunity to try and outdo the Clintons’ phony photo op:  instead of bunking at a five-star hotel, sweethearts Mr. and Mrs. Obama can attempt to win back wayward voters by holding their noses to dance poolside on a budget getaway at a rinky-dink Holiday Inn.