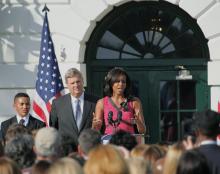 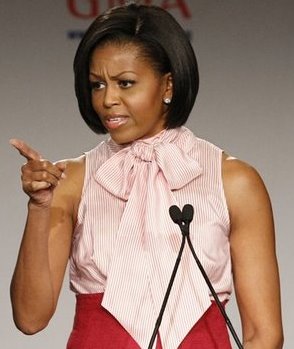 Michelle Obama, a woman who has certainly been ‘shaped‘ by what the government has provided her in the way of free meals, is now touting the benefit of having America’s children’s bodies and minds be manipulated by people like her husband, whose ideological bent is toward bureaucratic control and socialism.

Mouthing words of concern over the health and well being of school children, the First Lady said “That’s why we start with kids, right? We can affect who they will be forever.”  These are words that should send shivers up the spine of every concerned parent in America.

Think of it: Michelle Obama’s goal is to infiltrate not only the bodies but also the minds of children who are not hers so she and her ilk can “affect who they will be forever!”

On the South Lawn, a mere stone’s throw from where the 100 x 100 ongoing construction of a secret project that looks like an underground bunker/possible swimming pool is taking place, Mrs. Obama recently made her ‘nudge‘-style opinions known.  The event was a reception to honor schools that have met the goals of the US Department of Agriculture’s Healthier US School Challenge (HUSSC), now a subsidiary of the “Let’s Move” (our children towards the welfare rolls) initiative.

Mrs. Obama, whose daughters attend private school, bubbled over with exuberance about the fact that the majority of American children are in publicly-funded incubators called public schools, where liberal teachers and policies are standing ready to restructure “habits and preferences” in hopes of raising up a generation of proselytes.

With a concerned smile and dressed in a sleeveless designer top, Mom Michelle disguised government control as a child-friendly plate of crudités and hummus.

Mrs. Obama told the rapt group, “When many kids spend half of their waking hours and get up to half their daily calories at school, you know that with the food you serve and, more importantly, the lessons you teach that you’re not just shaping their habits and preferences today, you’re affecting the choices they’re going to make for the rest of their lives.”

“At the reception, Mrs. Obama praised the 1,273 schools that have doubled the number of students eating federally subsidized meals that fit the program’s criteria.”  The first lady seemed thrilled about the increased additions to the entitlement rolls because, as she said, “That’s why we start with kids, right?”

Mrs. Obama praised the Burlington Elementary School of North Dakota, where she said the “teachers eat two USDA-approved meals a day with the students.”

Praising those teachers who voluntarily eat “breakfast and lunch with students every single day,” Mrs. Obama applauded the hovering menu monitors by saying, “Now, that’s a sacrifice. You know it. That’s love.”

According to Mrs. Obama, “the beauty is, is that you’re not just making this generation of kids healthier, but the next generation as well. And that is truly, truly powerful stuff.”

The First Lady reassured the teachers who’ve dedicated themselves to supplementing indoctrination during feeding time by saying, “You’re affecting not just how these kids feed themselves, but how they’re going to feed their own children,” which, if all goes according to plan, the government can also one day mold into government-controlled mechanical drones.

The First Lady expressed joy that children “trained” in these schools are having a beneficial effect on their families, saying, “They’re changing the way they think about their health and they’re trickling that information down to their families.”  Mom and Dad beware — God forbid one of you should indulge in an unwholesome treat under the watchful eye of Junior. Who knows, the next day, these trickle-down kids may be asked to report aberrant behavior to Michelle’s brigade of meal monitors.

Granted, helping kids and their families make healthier food choices is an admirable goal on the part of the first lady.  However, a problem arises when liberals are in charge and make broad, vague statements that seem to connect lunch and life choices.

Choices like: not worrying about birth control because just like free lunch, free condoms are also government-funded and available at school. How about the “right to privacy” and the choice to disregard the moral direction of parents?  Or the message to relax because if that complimentary condom should happen to fail, someone in the guidance office will gladly drive any girl over the age of 11 to the nearest available abortion clinic, just as soon as she downs that government-approved carton of low-fat milk.

Michelle reiterated that “we” (whoever that is) “can affect who they (we know who “they” are) will be forever.”

The whole emphasis on the government guiding food choices is troubling, because discussion over healthy food has the potential to be the perfect entree for liberals to commission public schools to prod, persuade and hold sway over other areas such as faith, political affiliation, and morality. With that in mind, Michelle Obama’s insistence on depositing government-funded “free” food into the stomachs of America’s children, perhaps in hopes of transporting liberal philosophy into their hearts, should alarm any American whose child eats breakfast and lunch in a public school.