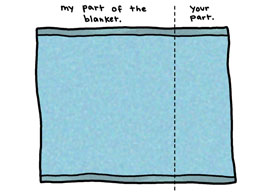 The left finally has a poster boy for the “Occupy” movement, and his name is Shawn Coleman. He encapsulates the liberal “What’s yours is mine and what’s mine is mine” mentality fostered by a president who continually prods the nation toward sacrifice while ensconced in the lap of luxury.

In the spirit of an Obama family favorite, $145 Wagyu rib eye steak, 41-year-old Occupy Hartford protester Shawn Coleman, a man with no known address, was arrested on a street corner brandishing a steak knife. Shawn was attending the otherwise peaceful protest, save the usual neighborhood violence which places the Connecticut capital seventh on a list of the nation’s most dangerous cities.

Coleman, one of the 250 activists who attended Occupy Hartford’s first march, was apparently so committed to sending a message to Wall Street that he put his tent pegs down on city-owned land that occupiers have renamed “Turning Point Park.” Mr. Coleman is only one of a dedicated handful that has actually inhabited the park with canopy-style tents.

“Demanding that wealthy bankers cough up free cash is one thing, but being asked to go halfsies on a city-issued comforter while bedding down in a cold, wet encampment is over the top.”

Unfortunately for Shawn, he missed the antiwar rally and the potluck dinner because he was charged “with threatening and disorderly conduct.”

It’s too bad he couldn’t make it, because marching for peace and sharing a blue tarpaulin, a communal table, and a Porta-Potty usually fosters a sense of camaraderie among the 99%, a sense of togetherness that is sadly missing amid the selfish, individualistic 1% who control the nation’s wealth.

Seems all was going well until a shortage of blankets, a rare commodity in the “Turning Point” tent city, caused an upset among the preachers of equitable resource distribution.

While joining with others to send a message to Wall Street that avarice among the rich will no longer be tolerated and that sharing wealth is mandatory, Coleman threatened to stab a brother united in the cause. Apparently, after hunkering down for the night on an air mattress for peace, Shawn got “agitated over sharing blankets with another occupant of the tent.”

Demanding that wealthy bankers cough up free cash is one thing, but being asked to go halfsies on a city-issued comforter while bedding down in a cold, wet encampment is over the top. Especially after marching, chanting, and writing messages on canvas boards that say things such as: “Because a dignified life for all must supersede an extravagant life for some.”

People willing to reapportion other people’s money can get testy after participating in marches in support of amnesty for illegals doing the “jobs Americans won’t do” while hearing others complain that college graduates can’t find work. In fact, that kind of “diversity of opinion” may be why one person could spend the week demanding prosperous people share more and then someone else, when given a chance to do the same, would pull a knife instead of peacefully hogging the blanket.

Thus far, it appears to matter little what demands are intrinsic to Occupy Every Damned City You Can Trash because for many, the higher truth is found in the symbolism of “so many people in so many places” coming together in tents, sleeping bags, and extra-large construction-grade trash bags. These are the collective visionaries who represent what Barack Obama now agrees is “the 99 percent”—those set apart from the self-serving 1% who hoard the wealth, sleep in beds, go to work, and would rather not relieve themselves on police cars.

While it remains unclear what direction the Occupy movement will take, Shawn Coleman probably won’t be there to find out. Although a well-meaning Mr. Coleman may have merely intended to use a sharp implement to carve up the blanket into equitable squares, he’ll have to prove that to the authorities, because it seemed as if he was ready to stab a rally mate over who owns the sleeping gear.

Still, despite the blanket controversy and lack of focus, many occupiers insist they’re helping to make the world a more loving and caring place.

In the words of Hannah Kluger, a University of Hartford student who “spent two nights early in the week at Turning Point Park before taking a break to catch up with homework” (and in all likelihood charge her iPhone): “We’re forming communities here. For me, we just need a greater sense of compassion for our fellow human beings.”

Unless that means after spending the day shouting down “The Man,” storming private residences, and singing 100 choruses of “Peace Train,” occupiers are forced to split a city-issued blanket.