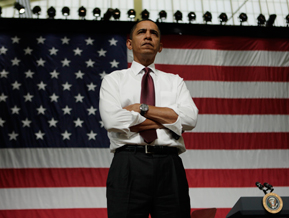 Purposeful inaction is a form of passive-aggressive behavior.  Doing or saying nothing is still doing something.  William Shakespeare once said:  “Action is eloquence.”  Barack Obama is considered by some to be an eloquent speaker, but the President’s rhetoric is meaningless when his hollow words, regardless of how well-executed, are followed up with inaction.

In the past, Obama has been quick to remark on issues and events of which he disapproves.  Unable to contain himself, oftentimes uncontrolled frustration and disdain inappropriately spill out in public forums.  If the President senses rejection, he responds contemptuously by expressing unsolicited opinions.

Case in point: Everybody knows how Obama feels about the Tea Party movement, whose members he referred to with the vulgar sexual slur “tea baggers.” It is also no secret as to the President’s dismissive, mocking attitude toward the Fox News network.

Priding himself as the champion of equality, Barack Obama is quick to step forward in defense of those victimized by what he perceives to be racial insult.  If an incident involves race, without forethought the President has been known to assign blame before gathering facts.

Yet when a barrage of racial slurs victimized Herman Cain, Obama said it all when he failed to step forward to condemn the hostility directed toward the first conservative black presidential candidate.

Early on, the Obama administration warned America to be on the lookout for certain individuals the government felt posed a threat to the nation’s safety. A Homeland Security document was issued that described potential terrorists as: ex-military, those who respect and defend the unborn, Americans in favor of secure borders, evangelical Christians, and Second Amendment-rights advocates.  In other words, Tea Party members.

By choosing to ignore ‘Occupy’ Washington DC activists shoving an elderly woman down a flight of stairs while chanting “Hey, hey, ho, ho, corporate greed has got to go,” the President sends a louder message to America than any government attempt to identify and define conservative views as the root of potential terrorism.

Despite all his rhetoric, Obama has never spoken louder than what he hasn’t said about what’s going on all over America with the ‘Occupy’ movement.  As the growing brand of miscreant activism devolves into a conglomeration of squalor, crime, sickness, death, and disrespect for all that is good, America’s usually chatty and opinionated President is suddenly at a loss for words.

What happened to the man who dropped everything to rush to Tucson, Arizona to address a single act of random violence against Congresswoman Gabrielle Giffords that took the lives of six innocent people? There at the podium, the President cited Scripture, talked about children splashing in rain puddles, called for national civility, and predictably used the incident as a platform to unjustly accuse his political enemies.

Wasn’t it Barack Obama who once said, “We will never forget the selfless courage demonstrated by the firefighters, police officers and first responders who risked their lives to save others?”  Yet at ‘Occupy Wall Street,’ when an EMT fractured his leg after being callously shoved into a ladder by an irrational protester, rescue workers were prevented from transporting the disturbed aggressor to the hospital by a hostile human chain. Obama, proud signer of the First Responders bill, had nothing to say.

In addition to a tuberculosis outbreak in Occupy Atlanta, a respiratory virus they’re calling “Zuccotti Lung,” a norovirus also known as the winter vomiting virus, has infiltrated the camp on Wall Street. According to a New York news organization, “The damp clothing and cardboard signs wet with rain are also breeding grounds for mold. Some protesters are urinating in bottles and leaving food trash discarded throughout the campground, providing further opportunities for nastiness.”  What’s next, cholera?

Does Obama care? People’s lives and public safety hang in the balance and the man supposedly focused on a healthier America remains silent. In Vermont and California, body bags are being occupied while a seemingly oblivious President chooses to do and say nothing.

Instead, Barack Obama fritters away precious time on frivolous campaign junkets, tours classrooms in Pennsylvania, attends fundraising dinners, and delivers remarks at events like the National Women’s Law Center’s Annual Awards dinner.  As American cities devolve into open-air sewers, giant Petri dishes where ‘give us more’ squatters multiply in a broth of hostility, hate, and envy, the President is all about the vital work of deciding whether or not to tax Christmas trees.

In fact, right about the time Obama flew off on a nine-day $9 million Asian tour, a suicide took place in ‘Occupy’ Burlington and gunshots fired into a crowd killed a protester in Oakland.

By comparison, based on Barack Obama’s tolerance of widespread incivility it appears the Tucson call for mutual respect may have merely been a plea for civility towards Barack Obama. Otherwise why would he fail to condemn a movement that has become a melting pot of shootings, deaths, tuberculosis outbreaks, alleged rapes, anti-Semitic aggression, lewd conduct and more?

The master of liberal didactic artistry may not realize it, but in a way he has returned to teaching. This time the lectern is positioned squarely in the middle of America and the lecturer is speaking loudly without uttering a word.

Hopefully, the nation is conscious and aware, because whether America rises or falls as a nation clearly hinges on our citizens recognizing the message conveyed by Obama’s non-verbal lessons and deliberate inaction.

If Shakespeare was right and “Action is eloquence,” Barack Obama’s silence and purposeful inaction are in fact a distinct action – and the President of the United States has never been more eloquent.