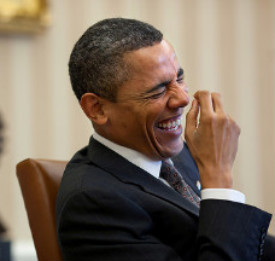 A more appropriate title for the 2011 G-20 Summit would have been the G-He’s-Funny Summit because while there Barack Obama was a veritable barrel of laughs. The first ha-ha was Obama going to the summit in the first place, especially since he intended to contribute economic advice.

While in France he hugged the wrong people, behaved like a kindergartener in a class picture, and while trying his ever-present hand at stand-up comedy, insulted France’s president and infuriated an American ally.

The President renowned for bowing to dictators, tyrants, and Saudi kings diplomatically shook hands with Angela Merkel, David Cameron, and Nicolas Sarkozy, and said “hello” to President Hu in Chinese, saving the bear hugs for Islamist Recep Tayyip Erdoğan.  In the presence of the Turkish Prime Minister, Obama skipped his traditional curtsy and warmly burrowed his face into Erdoğan’s neck.

After greeting Argentinean President Christina Kirschner, who was recently elected in a landslide, and claiming to be unconcerned about a second term, Obama verbally elbowed France’s president, also up for reelection next year, saying, “So Nicolas, we all have to take lessons.”

The President must have either been feeling gregarious or someone unplugged the Teleprompter for a second, because after implying that Sarkozy needed coaching on how win an election from a Latin-American woman, Obama attempted to evoke laughs at the expense of Nicolas’ famously less-than-movie-star looks.

With his G-20 buddy standing nearby, Obama said, “I want to make mention that this is our first meeting since the arrival of the newest Sarkozy, and so I want to congratulate Nicolas and Carla on the birth of Giulia.”  Then the President inserted this unscripted laugh line: “And I informed Nicolas … that I am confident that Giulia inherited her mother’s looks rather than her father’s, which I think is an excellent thing.”

Apparently, Obama’s attempt at getting a laugh funny “fell flat.”  He’s usually so funny; it’s hard to figure out why those in attendance claimed that President Sarkozy “did not appear greatly amused.” Not only that, but some French media outlets were insulted. Celebrity website Stargora said, “Barack Obama has openly and publicly ridiculed the physical [appearance of] Nicolas Sarkozy,” adding that Obama’s comments were delivered “without pity.”  Ouch!

It’s too bad Obama’s timing when telling a joke that undermines international relations isn’t as finely tuned as his ability to ruin photo ops for world leaders.

Just a few months ago Barry acted like a disruptive child and turned a UN group photo into a joke.  At the time, the President was so overcome with friendly exuberance that just as the flashbulb flashed, America’s very own jolly jokester waved to an imaginary friend, completely blocking Mongolian President Tsakhia Elbegdorj’s face. Tsakhia now knows that if Obama attends another event and there’s another group picture, before smiling for the camera he should slip on a traditional Mongolian shepherd’s hat so at least he has a fighting chance to locate himself in the picture.

It could be that the Mongolian president alerted Manmohan Singh, Prime Minister of India, to the now-famous Barry Block, because at the G-20 Sikh Manmohan was wise enough to wear a dastar before agreeing to participate in a group portrait with the American president.

Good thing, because overcome again with uncontrolled conviviality Barack waved to God-knows-who to alert them that he was in formation compliance and did so just as the G-20 class photo was snapped, managing to obscure all but Singh’s gray turban with his raised hand.

Undeterred, and especially after the rousing reception he received for some of his antics leading up to the press conference, the President’s comedy routine really started to roll when he got behind the podium. Obama was there because he must have thought that the smashing success of Stimulus I, which he defines as “passing the strongest financial reforms since the Great Depression,” coupled with the slight dip in unemployment from 9.1% to 9%, was reason enough to go to Cannes, France and offer input on how he managed turn the bleak US job picture around.

After acknowledging the dire condition of the world economy, to lighten things up the Constant Campaigner threw a comedic curve ball to the G-20 audience, saying that “the least of my concerns at the moment is the politics of a year from now.”

The hilarity continued when Obama said Republicans “prefer to protect 300,000 millionaires” to putting “hundreds of thousands of people to work.” That statement may have required the help of a canned laugh track, because even polite socialist European types know that to the detriment of 260 million people, this guy, to benefit 30 million uninsured, hopes to gut the world’s finest health care system.

Even at a serious event where the world’s fiscal future hangs in the balance, braggadocio can be amusing, especially when someone with Barack Obama’s disastrous economic record crows about financial prowess.

Barack is either a great comedian or totally deluded, because he told the G-He’s-Funny crowd that he stabilized and is growing the American economy.  It’s hard to believe, but he actually did find a way to congratulate himself by saying “In terms of my — you know, my track record on the economy…when I came in [the] US economy had contracted by 9%. The largest contraction since the Great Depression a little over a year later the economy was growing by 4%.”

The ideological ramrod then went on to talk about the Republicans’ “rigid ideological positions.” He told the audience that, no thanks to the Congressional Republicans, his jobs bill has the potential to “solve all our problems… grow our economy…put people back to work [and] reduce our deficit.”

According to the funniest act at the G-20, “it’s just a matter of setting politics aside and constantly remembering the election is one year away.”  Obama told skittish world leaders, fully aware that world economy is careening toward global insolvency, that “If we do that, there’s no reason we can’t solve these problems. Alright?”

And so, after the touchy-feely Turkish clinch controversy, the gesticulation gaffe, and the French first daughter compliment faux pas were topped only by the hilarious economic/jobs bill comments, the President of the United States departed Cannes awash in the type of hysterical infamy that places him in the same company as comedy giants Pauly Shore, Peewee Herman, and Carrot Top.