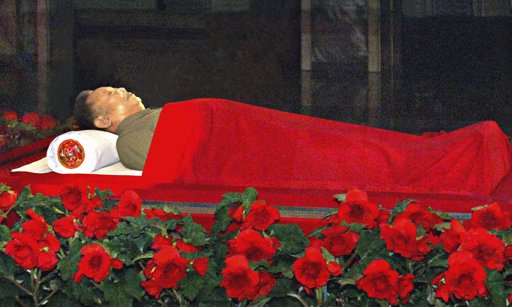 Thankfully, based on smart lifestyle choices, it is unlikely Barack Obama will ever succumb to the demise that took out Kim Jong-il: a myocardial infarction at 69 years of age, reportedly resulting from “physical and mental overwork.”  The president has not yet commented on the passing, but the two leaders faced a number of common issues.

For lack of a better word, Generalissimo Kim Jong-il’s 14-year reign could only be described as a theocracy.  Despite his inability to multiply loaves and fishes, starving North Koreans were led to believe that Dear Leader was imbued from on high with “supreme supernatural powers” such as “wisdom, leadership and military prowess.”  Kim Jong-il needed no Styrofoam columns to attain “demi-god cult status.” He had 500,000 “Revolutionary Research Centers” and a state-controlled MSNBC-style media with no pesky Fox News, or any other media at all.

Born in the former Soviet Union, Kim Jong-il suffered from the curse of powerful leader birthplace confusion.  But instead of birth certificate-embossed campaign coffee mugs, Kim employed indoctrination sessions to push the fable that the little dictator “had a miraculous birth,” not in a sterile delivery room in Honolulu, Hawaii, but in a log cabin “atop a legendary Korean mountain.”

Reclusive and mysterious Kim Jong-il prided himself on being the leader of a totalitarian nuclear-obsessed nation that Human Rights Watch claimed controls “every aspect of political, social and economic life.” In fact, the socialist “Powerful and Prosperous Nation” is so dysfunctional that while focusing on nuclear proliferation, its food distribution program consigns millions of North Koreans to a lifetime of malnutrition.

Begging and groveling for the cup of gruel, North Korea is what healthy-eating guru Michelle Obama would clearly identify as a government-induced food desert. Except for a ‘core’ class of Kim Jong-il loyalists, “food insecure” North Korean children at seven years of age are more than half-a-foot shorter than a South Korean child of the same age.

Yet during Kim’s tenure and in honor of the chairman’s birthday, annually the ‘ordinary class’ would be gifted with an entitlement delivery that included “a bag of candy, a boiled egg, a pound of pork, wine, or cigarettes.”  While neither as reliable as the growing American food stamp program nor on par with campaign promises of full gas tanks and paid mortgages, at least Kim Jong-il made a yearly effort to keep the restless from becoming unruly or disgruntled.

Not to judge too harshly, but after stepping back from the canvas, what Kim Jong-il may have been trying to accomplish could have been merely a primitive North Korean version of leveling the 1% vs. 99% and black vs. white-playing field, by sharing a ‘piece of the pie’ and the reallocation of unevenly distributed opportunity and wealth.

Surprisingly, when it comes to addressing “belligerent acts,” through the indefinite detention provision of the National Defense Authorization Act, in memoriam Obama may end up unwittingly instituting an American version of the North Korean Minister of People’s Security: detainment without due process.

To benefit the common good and identify rabblerousing among the disgruntled, Kim Jong-il’s regime did encourage family members, co-workers, and everyday citizens to spy on one another — an extracurricular activity that oftentimes resulted in torture, imprisonment, and execution. Fortunately, Americans are largely exempt from similar security measures, and are subject only to being politely asked to report healthcare dissent at flag@whitehouse.gov and to assist in halting “the attacks on the President before they start” at www.attackwatch.org.

Rumor has it that Kim also wasn’t one to flaunt.  The North Korean leader never upgraded a Christmas vacation during an economic downturn from $1 million to $4 million.  However, a Russian emissary reported that while North Koreans ate grass and tree bark, Kim Jong-il exhibited an insensitive side. On a train trip across Russia, Kim ate “live lobsters air-lifted to the train each day which he ate with silver chopsticks.”

In the end, platform shoes, bouffant hairdo, and affinity for Hennessey VSOP cognac aside, the death of Kim Jong-Il brings with it the realization that a murderous albeit colorful chapter in modern history is over.

Much like the Kennedy, Bush, and the up-and-coming newly-ordained Clinton dynasty, the North Korean baton of power that passed from Daddy-Sung to Poppy-il is now being handed off to heir “Supreme Leader” Kim Jong-un, son to Kim Jong-il’s third but favorite wife, the late Ko Yong-hui. Un is in his late 20’s, Switzerland-schooled, and presently too portly to squeeze into Poppy’s old jumpsuits.

In the meantime, reaction from Washington to Kim Jong-il’s death is muted.  Thus, while the President plays golf and body surfs in Hawaii, the White House will “closely monitor” the abysmal American economy, the unemployment forecast, and the situation surrounding the death of the North Korean socialist-Marxist, and do so while Barack Obama indulges in fresh lobster at a beachfront estate in Kailua Oahu.