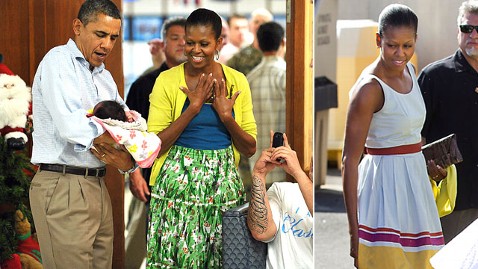 We’re back to Michelle Obama, and as much as I hate to say it yet again – it’s all about the double standard.  Here we have a woman who preaches financial abstinence, but whose personal expenditures are promiscuous beyond belief.  Mrs. Obama is a harbinger of ‘safe-spending‘ and then uncontrollably prostitutes herself on the altar of sartorial elegance and sumptuous living.

The latest controversy surrounds a $2,000 designer sundress the first lady wore to church on her $4 million Hawaiian vacation.  That’s right – a $2,000 muumuu; the damned thing didn’t even have sleeves.  Michelle wore the unassuming frock to church to worship the humble birth of Jesus.

You remember Jesus? He was the one wrapped in swaddling clothes, placed on a bed of hay in a manger as many years ago as dollars made up the cost of that dress.

Besides appointing herself the guru of healthy eating and then dining at high-calorie Shake Shack, the only thing more inappropriate than donning designer duds for Jesus’ birthday was when Michelle wore $575 Lanvin sneakers to ladle out soup to the homeless at a food bank.

The current cause of the ruckus is a flimsy white/striped number from Sophie Theallet’s Resort Collection, which, at the time it was purchased in late 2009, cost between $1000 and $2000.  For 2012, similar pieces from the newest Resort collection sell for that and much more.

Therefore, it appears as if “1,960 dollars less than I need toward another Sophie Theallet sundress” might be Michelle Obama’s answer to Barack’s most current question: “What does $40 dollars mean to you?”

Here’s the point:  Michelle Obama can wear diamond-encrusted undies if she wants, but not on America’s dime, and not while advocating for personal sacrifice.  Some would say she finances her excessiveness with her own money, but this is only partially true.  In essence, she is not.

Here’s why: She flew to Hawaii early, at a purported $100K extra in tax monies.  Not only that, but lately the first lady is making a habit of premature departures.  This is the third time this year she’s ventured forth ahead of her husband, bringing the ‘Michelle leaves early for vacation’ total to over $300,000.

In the interest of those less fortunate, if Mrs. Obama really wants us to give up more of our pie so others can have more, she should lead by example.

In fact, on the day Michelle wore the $2,000 dress, that afternoon she changed into a $950 skirt, which means with two or three outfit changes, not including pajamas, Mrs. Obama could have financed a one-way $100K flight for both herself and the dog.

If one frock cost 2,000 bucks and is only one of 17 outfits worn on a 17-day, $4 million vacation, then at a minimum Michelle, who travels with a military cargo plane full of God knows what, has probably spent almost enough money at $2,000 x 3 outfits a day x 17 days to chip in a large chunk of change toward her exorbitant taxpayer-funded flight expenses.

In ‘piece of the pie’-speak, to set an example for the rest of us Michelle could have skipped the couture and chosen instead to kick in for jet fuel.

Moreover, after the nation found out that the vacation expense was in the millions – millions! – you’d think the first lady would have the common sense to tone down the nouveau-riche exhibitionism for a spell. But no!  Instead she showed up in a $2,000 ‘Sunday Go to Meeting’ outfit.

Ah, and who can forget Michelle telling us: “The truth is, in order to get things like universal health care and a revamped education system…someone is going to have to give up a piece of their pie so that someone else can have more.”

I say: “The truth is, in order to save the hard-earned tax money provided by American blood, sweat and tears, Michelle is going to have to start giving up her ‘piece of their pie’ so that the rest of us can have more,” and that may have to start with Mrs. Obama offering to do something other than wearing a $2,000 dress twice.